By LRU Writer | On: December 18, 2020
The NFL sportscaster, Kay Adams who has been hosting the NFL Network's Good Morning Football has been popularized on screen for her fluent reporting skill. With bountiful tweets and rumors about the celeb reporter's dating life, we still have an eye for who her new boyfriend is. Is she still dating the famous footballer ....... or has she found a new boyfriend for herself? 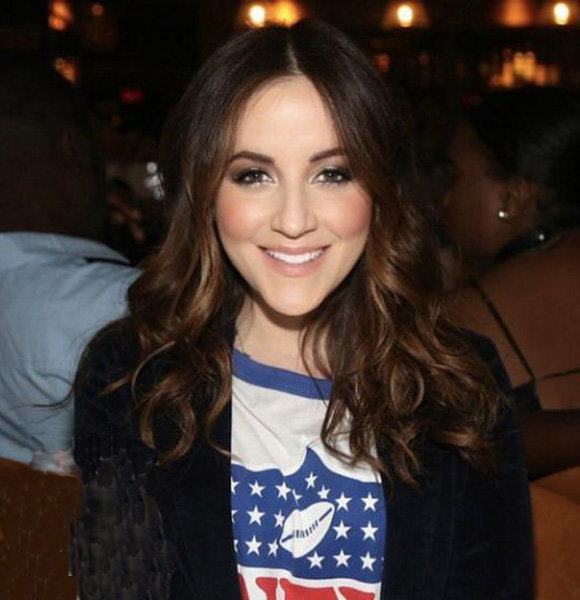 A woman who proclaimed her place in the NFL Network’s “Good Morning Football” and earned the nicknamed “Guru” for her acknowledgment in the same field, Kay Adams has enlivened the NFL atmosphere through her smooth journalism for a significant age.

The people behind their televisions aren’t just eager to watch her report football but are also in deep athirst to know her relationship status. And on such search, Adams’s tweet comes to rescue, which can't help but talk about her "boyfriends."

So, the young reporter is really dating or just making good use of her humor?

Getting To Know The Good Morning Football Reporte, Kay Adams

Working at the NFL for nearly about a decade for Good Morning Football, Kay Adams has been renowned as the most popular newscaster in the world of football after paving her first way through the St. Louis Cardinals. Adams has been currently hosting DirectTV’s Fantasy Zone. Prior to NFL hosting, the reporter has co-hosted NBC Sports Network’s Fantasy Football Live. In addition, she has also served as a host for special events for the Chicago Bear.

Brunette hair, a slender waist, and a hardy personality, Kay stands as one of the most beautiful reporters in the sports broadcast. However, much less is known of how this young and gorgeous reporter is still searching for her better half.

It is Adams’s tweets that have bombarded us all with the hints of her potential boyfriends. It was on 29th August 2011 that Adams tweeted,

“Arian Foster is going OFF on my boyfriend, Colin Cowherd? I dunno how I feel about this, AF. not cool.”

“My boyfriend is having a rough game tonight”

Then, it was after a year, on 11th February 2012, that she tweeted Kyle Eversgerd asking to be her boyfriend.

"Later on, after a couple of days, she again tweets saying, “Dear Abby, my boyfriend watches “teen pregnancy” on MTV on Saturday nights."

It was nearly after a year from the prior tweet when Adams fueled our suspicion of her having a boyfriend yet again with the 8 December 2013 tweet.

“@FCashflo dang, I always forget we're dating. I should really write it on my hand.”

After such baffling tweets, it was finally in the year 2015, Adams was finally seen at the ESPY’S with the New England Patriots wide recoverer, Danny Amendola. This suspicion was charged after Amendola posted a photo of them at the Super Bowl along with a hashtag of “#8oallday”. It was a good Amendola-Adams connection till the time when the two did not keep us updated with their relationship status and that the news of Ian Rapoport dropping in for Kay Adam’s Birthday took all the attention.

With these multiple hints, Adams has us all scrutinizing her personal life. Also, with much knowledge at her gains about football, she also did reportedly say that men are more intimidated by her because she knows more about football than they do. So if you are to-be Kay Adams husband, then you gotta be someone who is not intimated by her knowledge.

Nevertheless, Adams, however, is still on the roll to find her soon-to-be-husband who could support her for who she is and what she knows.

Kay Adams first started off her career hosting for the St. Louis Cardinals at their home games.

Then, she did her professional stint with the fantasy football shows that include SiriusXM's Livin' the Fantasy, Direc TV's NFL Sunday Ticket Fantasy Zone, and SiriusXM Fantasy Drive. She still continues her work as a host in Direc TV Fantasy Zone.

She has also worked for a gaming company named FanDuel. Likewise, she was part of the NBC Sports Network (NBCSN) as a reporter where she made occasional guest appearances on shows such as NBC Sports Talk and The Crossover with Michelle Beadle.

She has hosted special events for the Chicago Bulls, which is an American Football Team-based in Chicago.

And on September 2018, it was announced that Adams would be joining the DAZN boxing broadcast team as a host alongside Sugar Ray Leonard, Chris Mannix, Brian Kenny, and LZ Granderson.

As of 2020, she hosts Who Wants to Be a Millionaire but the mobile version.