By LRU Writer | On: February 22, 2019
Kendra Wilkinson Hints Divorce From Husband! Wedding Ring Absent. American actress Kendra Wilkinson, who is famed for her role in the movie, The House Bunny, is featuring in most of the headlines recently, as she baffled everyone with the news of her parting ways with her long-term husband. 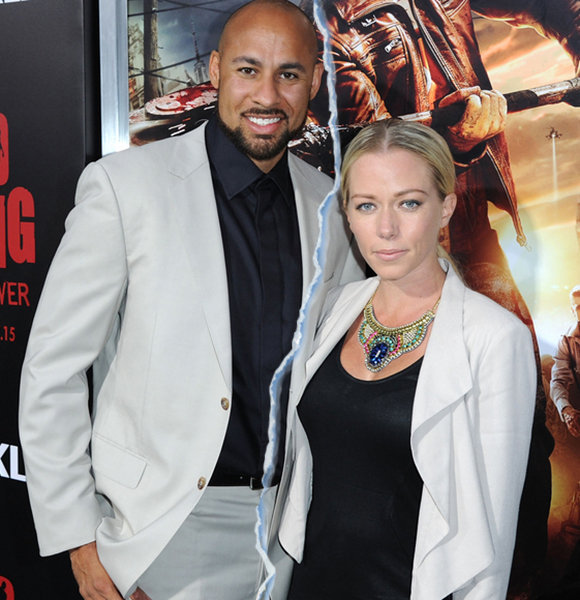 American actress Kendra Wilkinson, who is famed for her role in the movie, The House Bunny, is featuring in most of the headlines recently, as she baffled everyone with the news of her parting ways with her long-term husband.

But have you wondered what might be the cause of their separation? Let's dive into Kendra Wilkinson's personal life details to know that in detail!

Kendra and Hank Baskett tied the knot in 2009 at the Playboy Mansion, and they share two children together. Kendra Wilkinson and her husband along with their children before their divorce in 2019 (Photo: usmagazine.com)

The duo is parents to their son, Hank Baskett IV, 9, and daughter, Alijah Mary Baskett, who is four years old.

Kendra Wilkinson got married to Hank Baskett ten years ago, but as of now, Kendra is divorced from her husband, as they faced some marital hindrances.

Kendra made an official comment about her marital issues in late February 2018 after a tabloid article titled “Kendra’s Faking It For TV” was dropped out in the media. A source close to the Kendra stated about her decision to call it quits. The statement read:

"She wants to make sure she is making the right decision for her family but has truly hit a breaking point. Her and Hank have been having many arguments lately and they haven't been able to compromise on their disagreements."

Furthermore, as Kendra and Hank had a tough time especially over the last three to six months, both of them refrained wearing their wedding ring. And on 26th March 2018, she shared an Instagram story, in which she was standing in front of a mirror where a ring on her ring finger was visibly missing.

Moreover, in the post, she also mentioned 'I am proud of myself,' which hints that she is owning up to her decision of parting ways with Hank. Additionally, Kendra and Hank were spotted for the last time at their son's soccer game in L.A.; where both of them showed up without their wedding ring.

Kendra's Husband Hank was reported to be in an affair with a transgender model in 2014, which initiated the problem between them. As per reports, Kendra flushed her wedding ring down the toilet, when the rumors regarding Hank's affair was flashed out.

If the notable absence of a wedding ring from the post was the sign of things to come, the divorce - which got finalized a year later - was undoubtedly the tipping point.

Within a month after going ringless on Instagram, Kendra filed for legal separation from her then-estranged husband citing irreconcilable difference. Hank immediately followed the suit.

Though the split was amicable, the duo's divorce received pushback in October 2018 after a judge tasked with looking over the case rejected the settlement for errors on the paperwork. However, four months later, the court approved of the agreement and thus, the long-overdue split got finalized.

According to the court papers, the former Playboy model, age 33, and the retired NFL star agreed to share joint physical and legal custody of their two kids. Also, the ex-duo consented to divide the money in their bank account while opting to hold their respective assets.

American TV Personality Kendra on Top Dancing with the Stars