By LRU Writer | On: February 22, 2019
One of the popular couple, Hank Baskett, and Kendra Wilkinson's relationship might be summarized with above quote. The couple, who seemed to have a happy marital bond, shared a completely different marriage story. Spending almost a decade with each other, Hank and Kendra decided to back off from their marital responsibilities and now, making headlines for it. 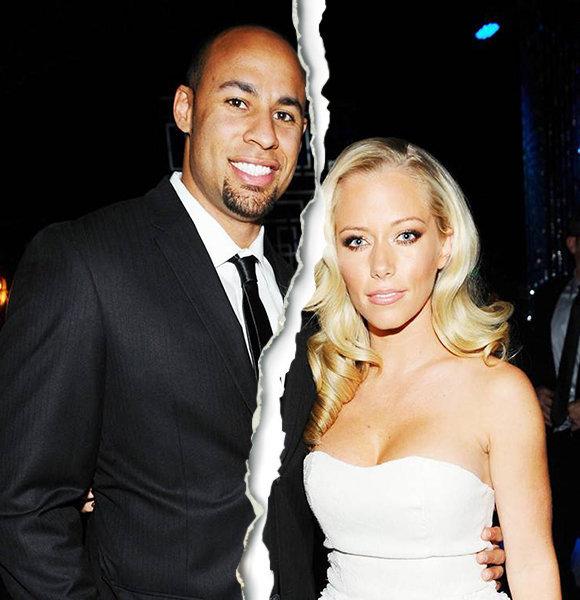 "Do not judge a book by its cover."

One of the favorite couple, Hank Baskett, and Kendra Wilkinson's relationship summarizes the above quote. The couple, who seemed to have a happy marital bond, shared an entirely different marriage story.

Spending almost a decade with each other, Hank and Kendra decided to back off from their marital responsibilities and now, making headlines for it.

Let us check out the reason behind the split along with their marriage, retracing back their married journey as well.

He proposed to his Playboy model girlfriend, Kendra Wilkinson on top of the Space Needle. Following six months of getting to know each other, the American player decided to level up their romantic dating life.

Later, the proposal turned into marriage after they exchanged sacred wedding vows at the Playboy Mansion on 27 June 2009. On the same year of their wedding, the couple welcomed their first child, a son named Henry Randall "Hank" Baskett IV on 11 December.

Well, their family was complete after the family of two blossomed into the entire family of four. That, on the surface level, sounds like a perfect, happy family; however, something fishy was happening all along.

Hints To Divorce: What Happened To Happy Family?

Their marriage was first rocked by a scandal in 2014 when Hank allegedly had an affair with a transgender model. His wife, Kendra was eight months pregnant at the time.

Despite such a scandal, the couple attempted to make their relationship work by committing to each other, which was not easy.

Similar kind of storm hit on their relationship again after Kendra was photographed kissing her I'm a Celebrity Get Me Out of Here! Co-Star, Jimmy Bullard in February 2015.

Following that, Kendra and Hank got spotted without their wedding ring in Los Angeles at their son's soccer game. After the series of their relationship problems, the couple decided to live separately on 1 January 2018 and Hank was spotted stepping out of the house in 2nd April 2018.

Later, Kendra was seen sharing the series of emotional videos on her Instagram story on Monday.

With the tears rolling down from her cheeks, she explained her split with then-husband saying:

“Ten years. I did everything I could. It wasn’t good enough. I will always love him and my heart will always remain open for him. I believed in forever, I really did. Guess it’s just not meant to be. I’m so scared, but I have to get strong for my kids — I will.”

She further expressed her gratitude towards her family and friends for supporting her at the time of her divorce. She added,

“Thank you to all my friends and family for supporting me at the moment. Every little ounce of love helps, thank you. I never thought I’d see the day, really.”

In the same Instagram story, Kendra also posted a photo of her and Hank on their wedding day, with a caption:

The model also took to Twitter to express her emotions on her broken relationship with her husband on 2 April 2018.

After all the hints for divorce, they finally ended their relationship on 3 April 2018. She took to Instagram on the day to announce that her married life with Baskett is officially over.

Following the Instagram post, Kenda Wilkinson filed for the divorce from her husband, Hank Baskett after almost nine years of togetherness. She cited irreconcilable differences for a reason behind her divorce and also requested for joint legal and physical custody of their two children.

Originally, Hank wanted to settle the divorce with his ex-wife Kendra in October of 2018 but got pushback after the judge presiding over the case rejected it for errors.

They wouldn't commit the same mistake when they filed court documents to legally part ways at the LA County Superior court four months later in February 2019.

As per the agreement on the settlement, the retired NFL star and his ex-spouse will have joint legal and physical custody of their two kids: Hank Baskett and Alijah, now age nine and four respectively. Likewise, He and the former Playmate will keep hold of their respective properties while evenly distributing the balance on their bank account.

Now, that the divorce is a done and dusted affair, the once-smitten duo can finally move on with their lives and still maintain an amicable relationship while doing so.