By LRU Writer | On: February 20, 2020
Kristian Haggerty's girlfriend confirmed the news on...she is dating an Instagram star...she had laid eyes on her while she still hadn't come out as lesbian writing... the age of the actress...information on her family members...But the actress and Demi split just a month later in...and the moments from the engagement was broadcast on 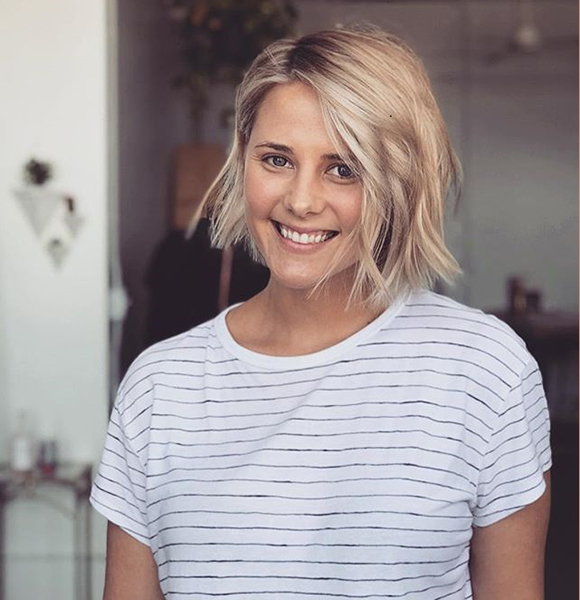 Reality star Kristian Haggerty is best known as the cast member of ABC's Bachelor In Paradise (2014). Apart from being a reality star, she is a production assistant and director based in Los Angeles.

She has garnered a huge fan following in social media as well and has more than 193K on Instagram alone.

Kristian is dating Instagram star, Taylor Blake. She confirmed the news exclusively to US Weekly on 16th February 2020 saying,

She’s amazing and I’m so happy and thankful.

Prior to this, the pair shared several PDA filled pictures on the occasion of Valentine's day on 14th February 2020.

The same day, her partner gave insight into her love for Kristian with the same pic of them kissing. Taylor captioned the post by reminiscing about the early days she had laid eyes on her while she still hadn't come out as lesbian writing,

When I was 13 I wanted you to be my Valentine, but I was closeted and too scared to ask you- So, I asked your cousin Luke to be my Valentine instead. Here we are at 27, and I finally made you mine. You were worth the wait, you little shit.

Kristian was previously engaged to Demi Burnett, the reality actress, and her co-star the show, Bachelor in Paradise (2014).

The two were well acquainted with each other prior to appearing on the shows sixth season. She revealed this during her interview with ET Online back in 2019:

We were just two humans enjoying each other's company. I had always known that I was gonna go on Paradise and I was upfront with her about that when we first met. So we both agreed to keep it open and non-exclusive.

Soon, they got engaged in Septemeber 2019, and the moments from the engagement was broadcasted on 17th September that year on Bachelor In Paradise (2014). But, the actress and Demi split just a month later in October 2020. They confirmed their amicable separation through Kristen's Instagram post on 31st October that that year which consisted of a joint statement regarding the breakup.