By LRU Writer | On: September 14, 2018
Canadian actor Kyle Schmid is well known for his role as Alex Caulder in the military drama Six. Along with an excellent resume of hits credits, Kyle also has a beautiful girlfriend with whom he spends adventurous times. Jump in the article below to be acquainted with Kyle's breathtaking romantic dating life and to know more about his girlfriend. 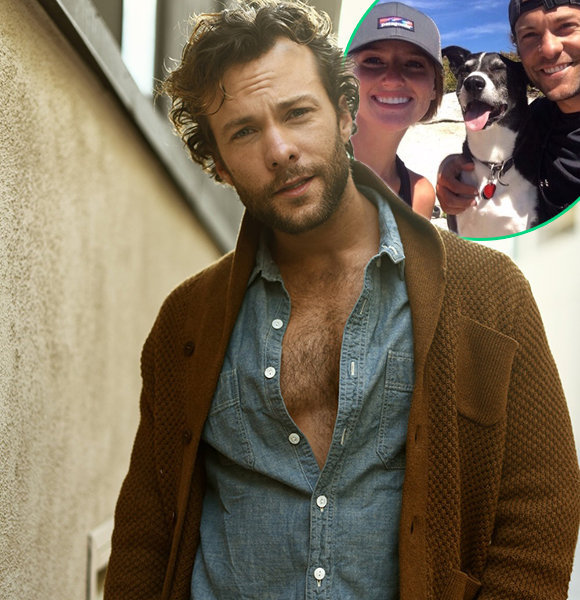 Canadian actor Kyle Schmid is well known for his role as Alex Caulder in the military drama Six. Along with an excellent resume of hits credits, Kyle also has a beautiful girlfriend with whom he spends adventurous times.

Jump in the article below to be acquainted with Kyle's breathtaking romantic dating life and to know more about his girlfriend.

Kyle, who stands at the height of 1.78 m (5' 10"), is in a dating life that envies people and steals their breath. He is in a perfect relationship bond with his girlfriend, Meredith McBee, who happens to be a Level II Reiki Healer and a Certified Crystal Healer.

And their relationship has even saved Kyle from being tangled with Ain gay rumors.

Though the couple appears smitten while being with each other, the pair has not yet revealed when they met and how they fell in love. But that doesn' hinder their relationship to be transparent as both of the lovebirds share their together clicked pictures in their social media accounts time and again.

Kyle's girlfriend Meredith was the one to upload their first ever picture on Instagram. She had Instagrammed a photo with Kyle and other friends when they were at the Dodgers stadium on 16 September 2015.

After it, Kyle uploaded a picture of Meredith in his Instagram on 4 April 2016 and via the caption disclosed that his friends were turning into a family. Since then, the pair unhesitantly uploaded pictures with each other and also shared their affection via social media. Meredith posted a picture with Kyle on 6 October 2016 when they were in Vail Valley, Colorado and captioned the picture writing, "Love this place and this guy." She even quoted Kyle as her family in the post she uploaded on 12 May 2016.

The pair also updated the fans of their trip they made to Maui Island, Hawaii and Yosemite Park, California by uploading their beautiful pictures in their accounts.

You May Also Like:- Is Brooke Valentine Still With Boyfriend? Her Dating Status After Surprise Revelation

On 4 August 2017, Meredith uploaded a photo with Kyle on a beach and wished him a happy birthday. She even quoted Kyle as her best friend and love while writing that she couldn't wait to spend more years full of adventure and laughter with him.

Top Of The World With Girlfriend; Married-Like-Relationship

Just after some months, the pair again went to Haleakala, Maui and Kyle shared a picture of there time being on Instagram on 31 October 2017. In the caption, Kyle wrote that he felt like being on the top of the world with his girlfriend. Read Also:- Gregg Jarrett Bio: His Family with Wife and Struggle That Almost Ended it All

The pair is unhesitant to share their affection for each other. In 2018's Valentines' Day, Kyle Instagrammed a photo with his lady and wished her as,

"Happy Valentine’s Day to my beautiful, funny and wildly talented rock, @meredithmcbee love you baby. To many more sunsets!"

Moreover, Meredith reciprocated the feelings by uploading a picture with Kyle and writing,

"Happy Valentine’s Day to my love â¤ï¸ here’s to many more adventures."

The duo's dating life has gotten even cuter for Kyle has celebrated his girlfriend's birthday in style. He took to Instagram in July 2018 quoting her as the amazing human being with the caption:

"This babe is my favourite. She’s an amazing human being. She’s kind and generous and smart and virtuous and forgiving and beautiful. I love her lots. She is a nice lady. You’re my number one. Miss you. See you soon baby. #happybirthday"

Well, it seems Kyle was not together with his girlfriend on a special day by the looks of his caption, "Miss you, see you soon baby." It seems he was indulged with his busy shooting schedule.

The 34-aged actor is set to appear in the crime thriller, 10 minutes Gone in opposite of actor Bruce Willis. As stated by Film Cincinnati executive director Kristen Schlotman, the shooting will commence from 10 September 2018 in Greater Cincinnati.

You May Also Like:- Travel Guide Writer Rick Steves Ended The Relationship With His Wife, Anne Steves in 2010. The Reason Behind the Divorce?

With such affection for each other, the pair is setting relationships goals, and are inspiring so many couples. It would be a pleasure to watch this couple getting married to pronounce one another husband and wife. Hopefully, it's the next plan for the couple.