By LRU Writer | On: April 04, 2019
Lance Stewart became an overnight sensation via Vine after his contents began to go viral... Eventually amassing over five million subscribers on the said social media platform, one of his vines garnered little under a million likes... True to his title of an online personality, the Vine star's relationship - like other aspects of his life - also gets played out publically...A stroll through his wiki shall reveal more... 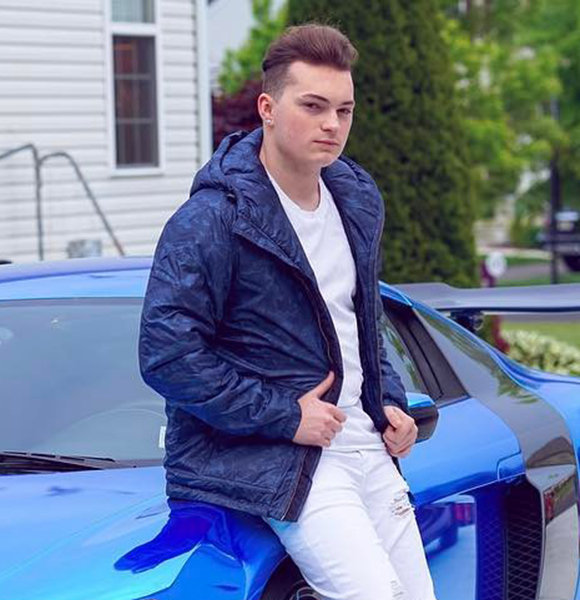 Lance Stewart became an overnight sensation via Vine once his contents began to go viral. Eventually amassing over five million subscribers on the said social media platform, one of his vines "It's My Money and I Need It Now" garnered little under a million likes.

A versatile social media personality, the Philadelphia native's online presence on other platforms is equally laudable. On his self-titled YouTube channel, he boasts over five million subscribers. About a million people subscribe to his secondary channel, Lance210.

Meanwhile, Lance garners over five million followers on Instagram too.

True to his title of an online personality, the Viner's relationship - like other aspects of his life - also gets played out publically. A stroll through his wiki shall reveal more!

Born on 20th June 1996 to parents Bruce and Nina Stewart, Lance grew up in Franklinville, New Jersey despite being a Philadelphia native.

A holder of American nationality, the YouTube personality is of Italian and Irish descent.

It was his sister Sabrina Stewart, who introduced him to Vine. Initially starting as a hobby, his content creating ways eventually made him an internet sensation.

Despite all the fame and notoriety, Lance - now age 22 - remains close to his family. Even his grandmother - better known as Badass Grandmom among his fandom - regularly shows up on his snapchat stories. He calls his grandma "his best friend."

His giving personality extends beyond the immediate family. In 2015, he spent over $150 on burgers to feed the homeless in California.

Beyond his family life, Lance once shared a budding romance with fellow Instagram sensation Elizabeth Wrust -- or known as Lizzy.

He and Lizzy began dating in 2013. Like him, his then-new girlfriend rose to prominence as a Vine star but later shifted her contents to other social media platforms.

For the next five years, the lovebirds were head over heels for each other -- regularly pooping one another's posts online. Adored by many, Lance and his former girlfriend Lizzy called it quit in December 2018.

Releasing a YouTube video titled "We broke up," the duo broke the news to their fans. A teary-eyed Lance revealed that their relationship wasn't working and the split was inevitable but friendly. Lance Stewart and his then-girlfriend, Lizzy announcing their split via YouTube (Published on 19th Dec 2019)

Distraught with the news of their breakup, his fans began to suspect that the separation was a made-up story. The 22-year-old immediately shot down the rumors and asserted that the two were never getting back together.

And in March 2019, Lance took to YouTube to make a significant announcement. Proclaiming his singlehood, he spoke his mind out and provided an update on his dating status.

"I know deep down in my heart that I won't get into another relationship until I know for a fact that it's the one... "

Perhaps, his ex-girlfriend also shares a similar stance on dating.