By LRU Writer | On: November 12, 2019
American singer Lauren Alaina is among the few young stars in a long-term relationship that hasn’t got either engaged or married. More than a half-decade later, the couple continues to inspire people and has set the perfect height of "Couple Goals." However, the couple is in no hurry to take their relationship a step ahead. So, what hindrances are blocking their way to the engagement? Scroll down to grab the chance and read the article to the core! 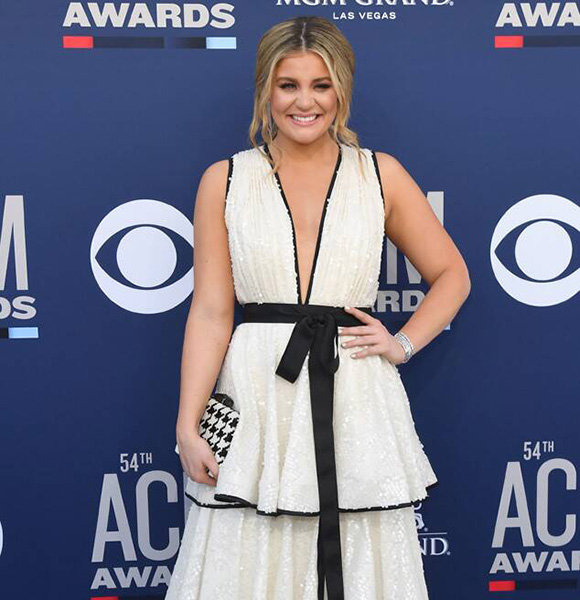 American singer Lauren Alaina was among a few young stars in a long-term relationship. More than a half-decade later, the couple continued to inspire people and set the perfect height for "Couple Goals." However, the couple was in no hurry to take their relationship a step ahead.

So, what were the hindrances blocking their way to getting married? Did she find love in her life again? Scroll down to grab the chance to get to the core!

Lauren dated boyfriend, Alex Hopkins since 14th October 2012 after they first crossed paths while playing volleyball on the beach back on 5th July 2012.

She claimed him to be the super-hot guy, and she proudly flaunted him as her super hot boyfriend and best friend.

Alex also expressed his feelings via Instagram in January 2016 after she released the sentimental post discussing Lauren's musical success, and he let the world know how proud he was of his girlfriend.

The talented model again took it to his Instagram and shared a collaborated picture on his Instagram on 2016's Eve and expressed how fantastic year it had been with each other.

Well, the romantic days of the couple didn't hold a full stop there. On their fourth anniversary, Lauren and Alex took to Instagram and shared their happiest years.

Lauren showered the gratitude of her longtime beau for their long and happy journey together, whereas, Alex recalled the moment of their first meeting and quoted:

July 5th, 2012 this nervous 17 year old boy would have done anything to make that pretty girl sitting next to him smile. He never could have imagined that on October 14th he would somehow work up the courage to ask her to be his girlfriend, and for whatever reason she would say yes. 4 years later she still makes me nervous, and I still do absolutely anything to see her smile. Happy anniversary @laurenalaina. This is just the beginning. I love you! 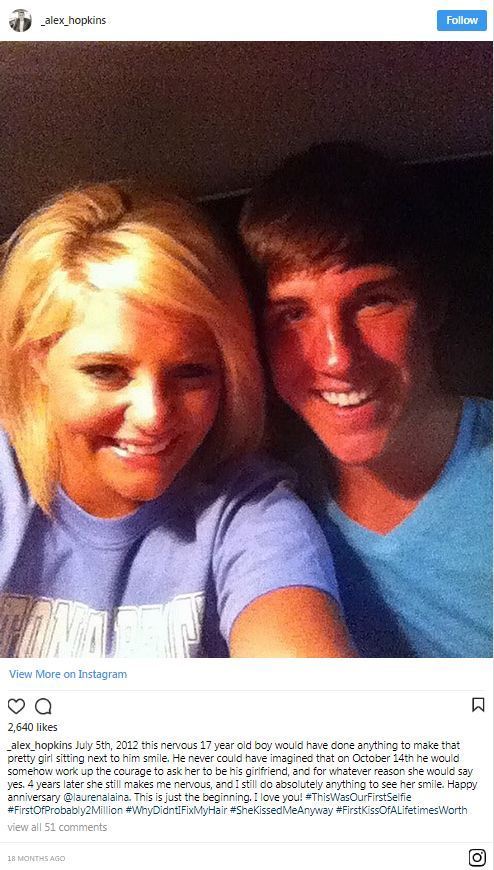 Not only the fourth anniversary, but the lovebirds also cherished their glorious fifth year together and shared their moment with their followers via Instagram in October 2017. The couple was spotted together during the 2018's Academy of Country Music Awards held at the MGM Grand Garden Arena in Las Vegas. They were one of the most sizzling couples in the function.

From Dating To Getting Engaged

The longevity of their relationship came with lots of questions. Lauren accepted with ABC Radio in 2017 that lots of people went with the questions about their marriage. She expressed:

“Everyone asks us because we've been together, it'll be 5 years in October that we've been dating. And it's going fine. I mean, we're 22!”

While the wedding bells were ringing everywhere, Lauren didn't want Alex to ship their relationship to marriage. She continued with ABC radio:

"You cannot propose just because everyone else is proposing. That is not a thing! Like, we're not doing that just because it seems to be the trend right now!”

With her high dedication, she happened to experience the high point of her career. Adding a wedding to it would be too much, the Georgia-native said:

“We're in such a big, life-changing time. It's like, we don't need one more thing to stress about. Let's just figure out what we're doing here and then we can have a wedding later at some point if it works out.”

Well, she changed her tunes on 21st  July 2018 as she got engaged to the love of her life, Alex Hopkins. The American Idol season 10 runner up broke the happy news via Instagram where the pair's newly-engaged glow was evident.

Post the engagement; things started to go downwards in Lauren’s life, her stepdad’s battle with stage four melanoma intensified. Thus, he and her mom moved in with the songstress for better treatment. The fear of losing her stepdad was too much for her as in the past; she lost her grandfather to suicide.

Amid family problems, Lauren grew distant with her fiance’. The pair realized that they wanted different things in life and couldn't get married. Thus, Lauren and her childhood sweetheart called off their wedding and announced the news via Instagram on 21st January 2019.

Post the breakup; the "Ladies In The 90's" singer moved on with new boyfriend John Crist, a comedian by profession.

However, her second chance at maintaining a stable relationship didn't work out either. On 16th Septemeber 2019, she casually revealed she was single again during an interview on The Bobby Bones Show.

During the show, she told everyone that they are still best friends just as the time before they dated. She also added,

"It just didn't work out. I guess that's how dating goes, right?"

The news came as entirely a surprise as everything seemed to be going well in her life. Moreover, her show Dancing With The Stars was set to premiere on the very same day. She had been practicing rigorously with her dance partner for the TV show.

But, not in even one stance did she ever hinted during those months about her split. She seemed more focused all along for the preparation. Looking back now, it shows that the performer moved on pretty quickly from her breakup phase, which is quite rare in such a scenario.

Still, fans are not so sure if the event affected her preparation in any way at all. Anyway, her performance will speak for itself since it premiered right after the disclosure of her split.

About a month and a half later, in November 2019, her ex-boyfriend John Crist found himself amid sexual misconduct allegations from multiple women. The news about his alleged misconducts were revealed on 6th November 2019 by Charisma News.

John was reportedly sexting multiple women at once, initiating sexual relationships with married and committed women, offering tickets to his show in exchange for sexual favors among other allegations.

The singer/dancer did not comment on anything about the allegations against her ex-partner.