By LRU Writer | On: November 06, 2018
Leland Vittert is an American journalist, currently fulfilling his responsibilities at Fox News. Leland, with his attractive looks, is involved with...With some gay speculation...Not talking til the age of 3, Leland... 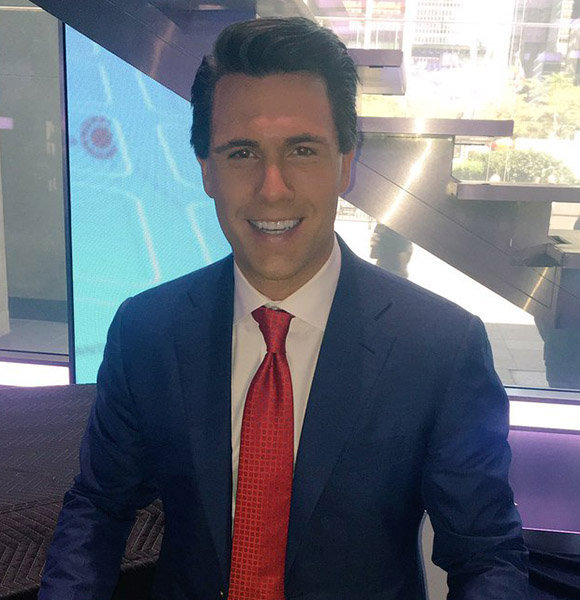 A child, who wasn't able to talk till the age of three, goes on to become one of the leading anchors in the world of journalism. That's what Fox News correspondent, Leland Vittert's success story is, with nothing less than like a script to some emotional movie!

Reporting news with integrity and honesty, Leland has made a career out of delivering truth to the public about some curious topics.

But, what kept Leland distinguish from being the talk of the town is his secrecy all over his personal life. For the ones, who are curious for any possible girlfriend-figure, the journalist has his parents and sibling feature all over his social media.

Leland Vittert, with his immense good looks complimenting his charming personality, has a lot of admirers all over the world. However, it comes off as a big surprise that the Fox News star himself isn't attracted to many.

You May Also Like: Who Is Fox News' Phil Keating Wife? Once Engaged, Now Married? Find It Out Vittert, at age 36 remains single and focuses his entire attention towards his professional career. However, it does not mean that the Fox News correspondent hasn't been linked with some rumors throughout his career.

Leland was rumored to be dating an executive named Sara Scott back in 2011. Though no sort of confirmation has been provided by the Fox News star regarding the rumors, it seems the relationship is all but over now, without any buzz.

Extremely secretive about his personal life, Leland, however, does has an opinion about girls and what he finds the most overrated quality in a person. In an interview with Denver Post in 2009, America’s News Headquarters co-anchor mentioned he wasn't a big fan of girls demanding a funny guy.

“Being funny. Every girl I meet says she wants to meet a guy who’s funny, who makes her laugh. Well, meet the right person and he’ll make you laugh.”

Being single till his late 20s have also given birth to some rumors regarding Leland’s sexuality. The rumor of him being a gay further resurfaced after he was found making an appearance at National Gay and Lesbian Journalist Association on November 2016.

Though there has been no confirmation by Vittert, an interview he gave back in 2009 to the Denver post confirms that he is quite straight and is interested in women.

When asked about what his real happiness would be, Leland described his dream scenario.

“If I could get a Victoria’s Secret model to fall in love with me, and to be on a beach with her with a margarita . . . that would be pretty close to perfect happiness.”

So, whilst the Fox News correspondent seems pretty straight, he remains single for now, in search of a perfect girl to get married with.

Born to parents Carol Vittert and Mark Vittert on 31 August 1982, Leland faced quite a traumatic childhood. Not being able to talk till the age of 3, Leland’s health issue was quite a big tension for his parents.

However, beginning to talk at 4, Leland soon picked up the pace and grew up fine with his sister in his hometown of Leland, which went on to become his name as well.

Leland after graduating Northwestern University with a B.A. in broadcast journalism followed it up with some great career accomplishments. His major career highlight came in the form of his Emmy nomination in 2006 for his coverage of Officer Bishop's clearing in Orlando, Florida.

His big break in Fox News came in 2010 when he joined the channel. Since then he fulfills the responsibilities of a correspondent and a co-anchor of America’s News Headquarters.

With almost a decade-long association with Fox News, the reporter earns some huge salary returns. With an average Fox News correspondent earning a salary of $102k per annum, it would be safe to assume that Leland earns a few more than the figure which has resulted in his net worth of $1 million.