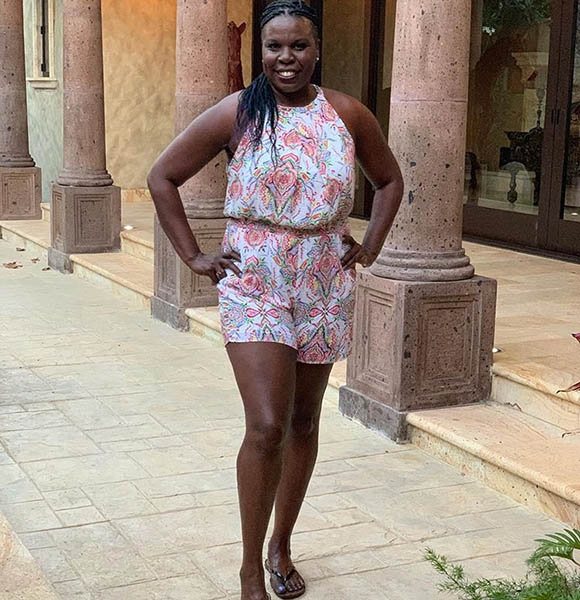 Leslie Jones is a comedian, writer, and actress most famous for her work on the long-time running show Saturday Night Live. And her hard work has paid off really well with a hefty networth.

Despite her success in professional life, she has not been able to achieve one thing in her life, which is a relationship or a married life.

Her willingness to be in a relationship is quite evident in the media though she gets caught by some gay rumors.

There was quite a talk about Leslie being married to Kyle, and we know why.

Their on-screen chemistry on Saturday Night Live was so convincing that it made many of us believe they might be partners in real life as well.

Leslie, who made her return to a sketch series during the last season of SNL, had a fake relationship with co-star Kyle which was just for fun. But the sketch was taken otherwise by most of the viewers.

Much to his surprise, Leslie's partner said, "They truly thought it was real." After that, they started flirting and performed a musical number.

Well, it was saddening to know their relationship lasted only till the show aired.

She Has A Partner or Married?

Jumping the 53-year mark in 2021, Leslie Jones is still unmarried and without a husband.

The comedian - who claimed to have never maintained a low-key dating life and married life - has also not been seen with any partners.

In her 2017 tweet, she claimed she never had a secret boyfriend and has terrible luck with men.

While she has tried her best, even losing weight and maintaining an excellent figure to appeal more to the opposite gender, Leslie's efforts have been all but naught.

We got some good news for those who are single, not married and are up to be with someone as humourous as Leslie.

She is single and ready to mingle only if you fulfill one of her criteria, making her laugh.

During a talk with Conan, she revealed the type of men she wants to be with. She said,

I like a dude that makes me laugh, and it's not hard to make me laugh - it really isn't - because I like the goofiest things. I love goofy men!

There you have it; if you can make her laugh, chances are high you have Leslie as your spouse.

Due to the absence of a male figure in her life, Leslie's sexuality also often comes into question. While she is not gay, she has joked around with the topic.

Moreover, her willingness to be in a relationship and possible married life with men clearly falsifies the speculation.

Failing to produce a wowing result during her first few performances on The Comedy Store, Leslie failed again when she received the chance to open for renowned actor Jamie Foxx. Gaining some insight from Jamie, Leslie separated from the comedic world for a while. Leslie Jones with actor Kit Harrington during one of SNL short sketches in 2019 (Photo:- hollywoodreporter.com)

Working different jobs throughout the years, she garnered experience and knowledge to improve her performance. Leslie's hard work and patience were rewarded in October 2014 when she became the oldest person - aged 47 at the time -  to join the cast of SNL.

After achieving fame and fortune through the platform, Leslie's net worth now is a whopping $7 million.

Born on 7 September 1967, Leslie Jones is a native of Memphis, Tennesse. Her father served in the United States Army because of which she and her brother Rodenet Keith Jones moved throughout their childhood.

Finally, when her father started his work as an electronics engineer at KJLH, the entire family settled down in Los Angeles.

Growing up to the height of 6 feet (1.83m), Leslie was a relatively tall child even at an early age. Insecure about her looks, she was also called names during her high school. Her parents became vital factors in coping with her challenges.

While her mom introduced Leslie to a beautiful African-American lady, her dad encouraged her to play basketball to use her height as an advantage.

With the support of her family, she started to learn basketball. Playing the game in high school added another bonus to her life. Soon after graduating high school, Leslie received a basketball scholarship to attend Chapman University in Orange, California, and later the Colorado State University.

While the 53-year-old comedian is thankful towards her family for the moral support during her time of need, sadly, they all have passed away. Leslie fondly remembers everyone but becomes emotional towards the subject now and then.