Marie Avgeropoulos Has A Thing For Dating And Turning Co-Stars Into Boyfriend! Any Chance She'll Get Married To Any?

By LRU Writer | On: August 16, 2018
An attraction that plays a vital part in everyone’s life and it’s a factor that creates a bond among people. And it usually takes place in the acting sector as they have to share the same set on and off 24/7. But the question is do they really fall in love or it’s just for the fame?

Attraction plays a vital part in everyone’s life and is a factor that creates a bond between people. It's more usual to take place in the acting sector, as they have to share the same set on and off, 24/7.

Marie Avgeropoulos also stands as one of those actresses who has been able to attract many co-stars she plays with. Sometimes attraction changes into a nice relation while at other times attraction just disappears after a short period. But the question is, do they fall in love or it’s just for the fame?

The good looking model, Marie Avgeropoulos had been hooking many fan followers to her beauty, to which her co-stars are also no strangers.

However, in that process, she got attracted to somebody as well and was found to be dating her co-star, Taylor Lautner. They had a good bonding as they were seen holding hands and hugging each other frequently and even shared a sizzling on-screen chemistry.

They met in Manhattan on the set of their film, Tracers. They dated for a year and a half before splitting in 2014.

They revealed nothing about their split, but Lautner being spotted in two West Hollywood gay hotspots- The Abbey and Mother Lobe has been speculated to be the reason for their breakup. And it was also known that Taylor hooked up with director Bryan Singer for his better future. Caption: Marie Avgeropoulous with her a year and a half boyfriend, Taylor Lautner (Photo: dailymail.co.uk)

Marie was also known to be dating Shawn Roberts, who used to be her co-star in comedy I love you Beth Cooper in 2009. But their relation could not last long.

As of 2018, Screenrant magazine reported she is not dating anyone and is single. The CW star was indeed dating the handsome wolf of the Hollywood, Taylor Lautner. However, after splitting from the former boyfriend, Marie seems to have taken a break from the dating world for a while.

However, Marie was dating a Canadian boyfriend in a low-key manner which came to light after her arrest for the felony domestic violence against her boyfriend in earlier August 2018.

She was arrested in Los Angeles after her boyfriend called 911 on 5 August 2018 claiming she hit him during the verbal arguments as per TMZ.

Also, when officers arrived on the scene, there was a bruise on his body and she was arrested.

An insider reported that Marie's behavior was the reaction of mixing medication and wine at dinner before the alleged altercation occurred. Her new mysterious boyfriend called the police in order to diffuse the situation rather than arrest her. Also, he begged the cops not to take her away and even bailed her out with $ 50K bail.

After the incident, the 32-year-old Canadian actress did not attend the 2018 Teen Choice Awards on 12 August 2018, though The 100 was nominated for Choice Sci-Fi/Fantasy TV Show.

So what does the current love life of thus actress shape up like? Does she have a husband who she is married to? Or is she single?

See Also:- Kandee Johnson And Her Tumbling Life With Irresponsible Husband; Finally Happy After Being Engaged To Boyfriend?

Well, thus far she has been very confidential about her love life but has not disclosed any key details about her marital life. Maybe she is married and has a husband who she is not willing to reveal and put under the spotlight, or maybe she is yet to find a stable partner in life.

So let us hope that she reveals anything about the sought for love life of her in the days to come.

Born on June 17, 1986, at Thunder Bay, Ontario of Canada to the father Philip Avgeropoulos and mother  Augusta Avgeropoulos, Marie once clarified about her parents that her father was born in Greece, but left with no disclosure about her mother's Greek ancestry.

Marie is popular at presenting her phenomenal act in movies and televisions role. Her work in I Love You Beth Cooper was commendable then in 2010 she played a role in film Hunt to Kill. She even got cast in The CW’s TV series Cult in 2013.

But besides work, she loves to spend time traveling in her motorcycle. Marie Avgeropoulous and Ricky Whittle even arrived by motorcycle for lunch with 100 showrunner Jason Rothenberg. 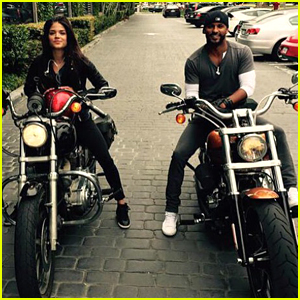 Marie Avgeropoulous and Ricky Whittle in a motorcycle for lunch with 100 showrunner Jason Rothenberg (Photo: justjaredjr.com)

Looking for her great work, it can be assumed that she must be earning a good amount of salary as her net worth is estimated to be $500 thousand.