By LRU Writer | On: August 07, 2019
Marissa Mayer is a...is married to...Their relationship got the chance to...Sharing similar interests and passion...was raised in...Changing her studies, she went on to... net worth is about to reach the... 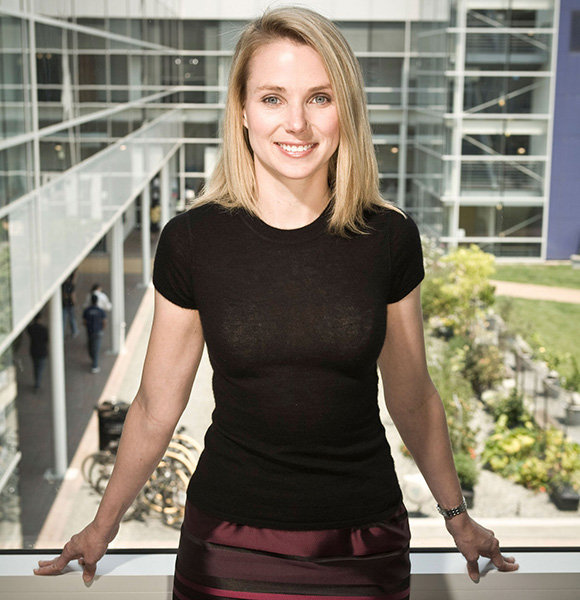 First female engineer and the 20th employee to have ever worked for Google, Marissa Mayer is a successful IT executive-engineer, who spent 13 years at the company before moving on.

Ending her contract with Google, she was named CEO of Yahoo in 2012. Proving to be one of the essential figures behind the success of the organization, Marissa raised the stock price by 70% during her first year. However, her rising career did come to an end five years later when Verizon bought Yahoo for $4.48 billion.

Resigning after the sale, she co-founded the Lumi Labs with a former colleague in 2018. Based in Palo Alto, the company primarily focuses on consumer media and artificial intelligence.

Marissa is married to entrepreneur and angel investor husband, Zachary Bogue. Their relationship blossomed in 2007 after they were introduced to each other through a mutual friend.

Sharing similar interests and passion for skiing, hiking, and running, the two lovebirds hit it off immediately. Within a year of dating, the two got engaged in December 2008.

Zachary proposed Marissa during a trip to Paris with a beautiful engagement ring. Soon the two went on to tie the knot in a wedding ceremony held in a San Fransisco Treasure Island on 12 December 2009. Three years into their marriage, Marissa and husband Zachary welcomed their first child; a baby boy named Macallister Bogue on 30 September 2012. After the birth of her son, Marissa gave birth to twins: Marielle Bogue and Sylvana Bogue on 10 December 2015,

As of 2019, Marissa and her husband are happily raising their three children and are assuming the duties as parents with perfection.

Marissa Mayer - height 5 feet 8 inches (1.73m) - was born on 30 May 1975 in Wausau, Wisconsin. Child of Margaret Mayer and Michael Mayer, she was raised in a middle-class family alongside her brother Mason Mayer.

While she did go to public schools and worked summer jobs as a grocery clerk, her family had more than enough to engage their child in different activities. She attended classes and lessons on extracurricular activities like swimming, skiing, piano, ballet during her middle school and high school education.

A graduate of the Wausau West High School in 1993, she got accepted to multiple colleges including the likes of Harvard, Yale, Duke, Northwestern, and Stanford.

Choosing Stanford, Marissa initially wanted to become a doctor but got bored only after a few semesters. Changing her educational field, she went on to take an introductory class on computer science, and soon enough was engrossed by the challenge of programming. In the end, she earned her Bachelor of Arts/Science and Master of Science Degree from Stanford University.

Her works and positions in Google, Yahoo, and Lumi Labs have earned Marissa - aged 44 -a great deal of fame, respect, and with it a massive fortune. While not much is known about the incomes at her previous workplaces, she approximately earned $300 million from Google and more than $ 400 million from Yahoo.

With A Similar Profession:- Dean Kamen Married and Has a Wife? Work is All He Talks About

With an estimated income of $1 million each year from Lumi Labs, she is reportedly the holder of $620 million in net worth. Combining her net worth with her husband Zack's fortune of $300 million, the couple's value is about to reach the height of $1 billion in 2019.