By LRU Writer | On: October 02, 2019
Mary Mouser is amongst those typical teenagers who started acting at a...The two first crossed paths on 11 November 2015 at a...is the middle born with two siblings a brother Aaron Parker Mouser and a sister Laura...has already earned 54 acting credits to her name which gives people an idea of how good... 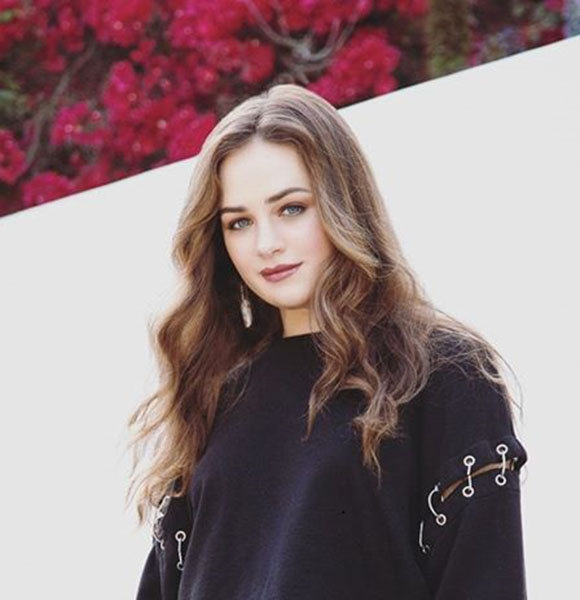 Mary Mouser is amongst those typical teenagers who started acting at a relatively young age. She was not into studies, so she eventually excelled in acting.

Her first film job came at the age of five as a photo-double in the drama movie, Signs. After that, she did voiceovers in films like Son of the Mask and Final Fantasy VII: Advent Children.

Now an experienced campaigner, Mary is giving fierce competition to other young actresses along with her two acting siblings: Aaron and Laura.

Just like the story of a romantic movie, Mary Mouser’s dating life is not an ordinary one. Like it often happens in the film, the girl and the guy see each other and immediately fall in love.

The same was the case with Mary and her long-time boyfriend, Brett Pierce. As described by Brett on his Instagram post in February 2018, the two first crossed paths on 11 November 2015 at a friend's party. Brett was totally in love with her, and little did he know Mary also felt the same. Mary Mouser with boyfriend Brett Pierce during her birthday week in May 2019 (Photo: Brett Pierce's Instagram)

Four years down the line, the couple is still together and cherishes the beautiful moment which they have spent together.

Mary Mouser - age 23 - was born as Mary Matilyn Mouser to parents: Scott and Tina Mouser. She is the middle born with two siblings, a brother Aaron Parker Mouser and a sister Laura Ashley Mouser.

The NCIS actress of 5 feet 3 inches (1.6m) height and decent body weight was not a studious kid as a child. She was homeschooled for her primary education and later fully involved in the acting profession.

As of 2019, she has completed the shooting of a new movie Gates of Darkness and is set to occur in more new movie projects in the future.

When it comes to talking about movies and TV shows, Mary Mouser has plenty of them to showcase. At the youthful age of 23, she has already earned 54 acting credits to her name, which gives people an idea of how good she is.

In the beginning, she started acting from the 2004 TV show, Without a Trace. Later, she did some voice-over for films before stepping in as a performer herself in the 2006 movie Mr. Fix It.

Now, she is a familiar face with recurring roles in series like Cobra Kai, Freakish and Room 104. Along with that, her acting jobs help her amass a hefty net worth and live a lavish lifestyle altogether.