By LRU Writer | On: August 21, 2019
Marzia Bisognin, one of the highly popular Italian Youtuber, has grabbed many fans for herself through her YouTube channel named Marzia...While in the process of discussing fashion in her vlogs, Mariza has also found love while climbing the height of success on this platform...Indeed, she has found the man of her dreams and is now relishing the relationship that they share together...This internet power couple has set some new couple goals for their fans to adulate... the wedding was held on the beautiful Royal... 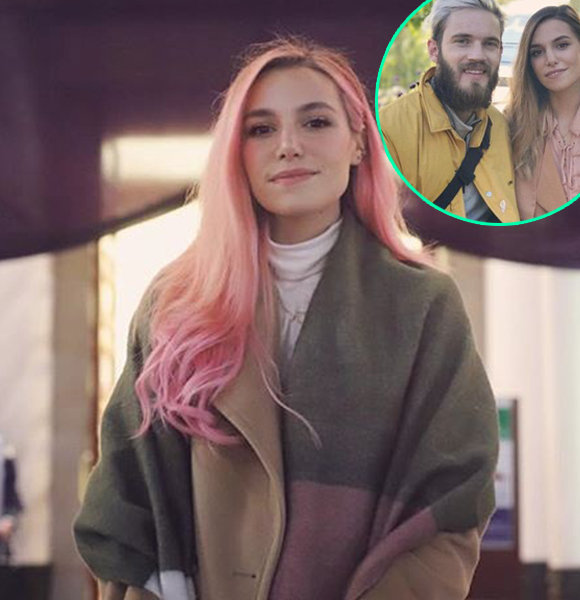 Marzia Bisognin, one of the highly popular Italian Youtuber, has grabbed many fans for herself through her YouTube channel named Marzia. While discussing fashion in her vlogs, Mariza has also found love while climbing the height of success on this platform.

Indeed, she found the man of her dreams and now relishes the relationship that they share. This internet power couple has had even set some couple goals for their fans to adulate.

Marzia Bisognin, who also helps her viewers speak Italian, has been romantically involved with a fellow YouTuber PewDiePie since ages. Marzia's boyfriend-turned-husband goes by the real name Flex Kjellberg, who already boasts over 63 million subscribers.

Marzia first met Flex online when one of her friends recommended her to watch the "idiot playing video games" on YouTube. In turn, she was amazed and enjoyed PewDiePie's video thoroughly. Later she sent Flex a message sharing how much she enjoyed the video, which became the initial point of their romance.

The pair officially started dating in 2011 and even appeared together in their collaborated videos. In 2013, the couple was rumored to be getting married and having a baby together.

Marzia finally cleared the rumor via a tweet on November 2013, saying that the couple was not taking marriage vows any time sooner nor were they expecting a baby.

The lovebirds were going active with their dating life and even moved in together. While they lived miles apart from each other, Flex moved to Italy to be with his love. Soon, they started sharing a home along with their two pugs, Maya and Edgar.

By adding to their live-in relationship, the couple had shared love along with collaborating in their videos. They even voiced in an animated Halloween series in which they starred the carton version of their two pugs, Maya and Edgar.

While dodging off her previous wedding rumors, the engagement was no rumor. Indeed, Marzia got engaged with her long-time boyfriend, Flex aka PewDiePie.

Flex finally got down on one knee and presented Marzia with an engagement ring and asked her to marry him. The news of their engagement quickly circulated in the media as Mariza posted the happy story on her Instagram

Mariza, who has a net worth of $2 million, posted a picture of her showing off her engagement ring while Flex planted a kiss on her cheek. She captioned the photo saying,

Well, the couple had their engagement in April 2018, and it was evident like they were looking forward to trying the nuptial knot have a family soon.

With the engagement and upcoming wedding on the way, Marzia addressed insights on her wedding through a video on YouTube in which she took an online quiz revealing her preferences for marriage.

During the quiz, she divulged how he prefers to have her tasteful and timeless themed big day. On the Q&A, Mariza further shared that she wished to have a candlelight dinner at sunset for her honeymoon choice.

The Youtuber even disclosed that she looked forward to having her wedding reception at a botanical garden. As for her wedding dress, she would like better to have a long-sleeved dress but bit out of the box for the ceremony.

On 19th August 2019, Marzia and her husband Flek aka PewDiePie, held their wedding ceremony. The YouTuber couple didn't compromise on her dream venue.

Just like Marzia had planned, their wedding got held on the beautiful Royal Botanic Gardens in the Kew district of London. With a diverse range of eye-catching flowers surrounding the location on their special day, her dream turned to reality. Marzia Bisognin and husband Flex Kjellberg share a moment alongside the guests during their wedding on 19th August 2019 (Photo:- PewDiePie's Instagram)

Also, the bride didn't change her mind on attire plans for the ceremony. She donned a gorgeous all-white long-sleeved wedding gown whereas her husband Flex suited up in all-black attire.

After the couple walked away from the aisle, they got joined by their close friends and family. At the reception, everyone - including the newly married pair - celebrated with fully lit sparklers (a type of firecracker) on their hand.

Following the wedding, the internet star took to social media to thank the guest and even cited her wedding day as the most beautiful moment of her life.