By LRU Writer | On: May 21, 2019
Mason Dye became a teen-heartthrob playing the role of a gay character named Garrett on MTV's Teen Wolf. Female and male fans went crazy for his shirtless scenes in the hit drama. While playing for the lacrosse team on-screen, he managed to win everyone’ heart off-screen... 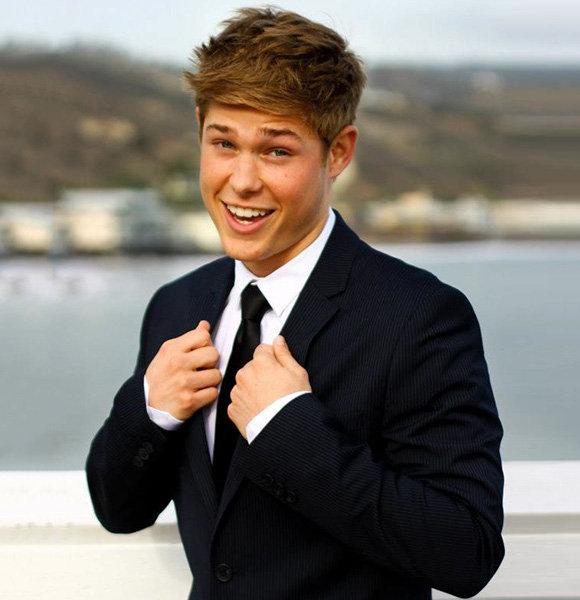 Female and male fans went crazy for his shirtless scenes in the hit drama. While playing for the lacrosse team on-screen, he managed to win everyone’ heart off-screen.

With many more movies & shows to his resume, the young actor is on his way to becoming the next Hollywood hotshot.

The handsome hunk was born on 15th July 1994 in Shawnee, Oklahoma. He boasts birth sign Cancer from his date of birth.

Mason got his start in the show business playing the part of Brandon in Secret Diary of an American Cheerleader. He then proceeded to act in the TV show, Finding Carter and movies; Flowers in the Attic and Natural Selection.

Well, he earns a decent salary of $50,529 per year from his acting jobs, which adds to his net worth.

Mason likes to keep things hidden in terms of his personal life. So far, he has been successful in doing so as not a single romance story has come out in the open.

However, there is no shortage of his on-screen romances. In 2014 movie Flowers in the Attic, he played the controversial role of a brother involved in an incestuous relationship with his sister. He portrayed the role of Christopher alongside actress Kiernan Shipka, who played his sister-cum-girlfriend Cathy.

While speaking to Bustle in 2014, the actor - height 5 feet 8 inches (1.73 m) - spoke at length about his ease while sharing the screen with Kiernan. He revealed that they clicked quickly, which helped him in pulling off the complex character. Mason Dye gazes into co-star Katherine McNamara's eyes in a still from the movie, Natural Selection in 2016 (Photo: Justtjaredjr.com)

Likewise, he appeared alongside Katherine McNamara in the 2016 film, Natural Selection. Although he has acted as the on-screen love interest of several gorgeous women, no on-set romance brewed between Mason and his fellow co-stars.

Mason grew up as the middle child alongside two siblings; older brother Preston and younger sister Taylor. The actor is not the only creative person in the family. His little sister Taylor is a country singer; one half of the country duo, Maddie and Tae.

Taylor’s role is of the background vocalist, guitarist, and songwriter in the partnership. The Dye family often collaborates as Mason made an appearance in the music video of his little sister titled, Shut Up and Fish in 2015.

While the younger siblings focused on their creative careers, Mason’s elder brother Preston concentrated on expanding his family. He is married to a woman named Jordann and welcomed daughter Ellie Harper in 2017. Mason shared the joy of being an uncle to the world via Instagram.

Although not married, Taylor is in a relationship with the fellow country singer, Jackie Lee. Only the middle child, Mason is single, or at least he pretends as such.

Well, no matter their relationship status, the Dye siblings are incredibly close, Mason puts up adorable pictures of them together in his social media.