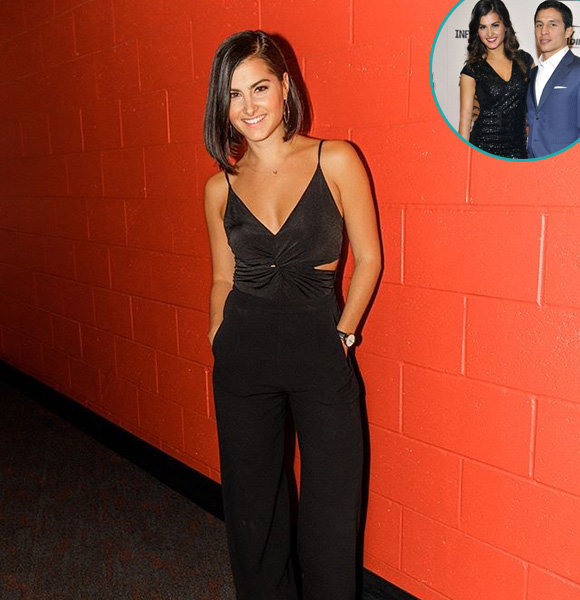 Spectacular interviews and elegance in hosting UFC programs, Megan Olivi has stolen every right to be one of the hottest reporters in the MMA!

The 32 aged talented lady, who took the chance to cover the Mixed Martial Art while still young, found the man of her dreams in the sports she loved so hard. Soon, the New Jersey, United States native was falling for the UFC fighter and was entering into what seemed to be a glorious lifetime bonding - a blissful married life.

Now, amidst Olivi's blissful married life, her husband is gearing for claiming his biggest victory while the reporter is trying hard not to watch her husband's fights!

It was in the year 2009, where the American UFC  fighter Joseph Benavidez (weight of 57 kg and height of 1.63m) crossed Olivi’s path when Olivi started working as a UFC reporter in Las Vegas and became friends with her.

The "just friends" relationship developed into dating and the duo has been strong ever since. Thanks to the Will Ferrell Joke that made this super bonding possible!

Olivi and Benavidez got married after the UFC champion bent down his knees and proposed to her. This special momentary joy on the day of Thanksgiving, lasted a lifetime when the duo got married in October after Olivi said yes. The wedding bells and vows were taken at a high-end hotel in Las Vegas, Nevada. Olivi and Benavidez rocking the wedding along with the Jersey boys posted on 11th October 2015 at 8:08 pm (Photo: Megan Olivi Twitter)

Ever since then, the two have been blissfully settled to their married life. The couple has a home and lives together with their dog named Benny. With each earning a salary of $300 thousand life just seems to go smoothly till date.

You May Also Like:- Susan Mikula Wiki: From Age, Net Worth To Relationship With Rachel Maddow

Olivi And Benavidez Proud To Have Each Other:

The couples have been sharing all their romantic times with each other, getting featured in the social media and letting the world know that they are happiest after marriage. May it be a picture of two together on the beach or birthday wishes; this couple has been compassionately celebrating their togetherness on a very sweet note. “I am Always so proud of my husband”

“Happy Birthday to my hero, my favorite, The GWOAT !”

This pair is more than delighted to have each other in their life. It was also on their 2 year marriage anniversary, Benavidez posted:

"2 years of marriage to this miracle! I'd be lost without you, Happy anniversary"

After such a beautiful time together, the couple, who are deeply in love, are equally worried about their partner.

Other Interesting Article:- Anthony Pettis in a Perfect Dating Affair! Only Love Between Him and Girlfriend

Olivia, who takes interviews of all the MMA fighters and watches every other MMA fights, currently reported that she isn't a big fan in taking the interview of her own husband and watching him play while in the game. She reported that she was scared to look at her husband while he was fighting because she just doesn’t know what’s going on even though she had witnessed his performance a hundred times.

“My heart just beats like crazy no matter what”

But whenever he wins a match, she does feel immensely happy for him.

“It’s awesome. It’s great because it’s a relief for me, but just to see his hard work pay off, that’s really what the win is.”

Benavidez also shows off his affection towards her by waving her every single time before he walks down the ring and choosing her to be the first person he meets after his match.

The duet till date has had a wonderful happy time and an overpowering romantic connection. They keep us all posted about their blissful marriage. However, more stories of these two couples have yet to be told.