By LRU Writer | On: July 25, 2019
Megan Thee Stallion became the breakout female rapper when her single, Fever...The rapper’s real name is...Ever since Megan blew up in the rap scene, her name has been linked with a couple of famous individuals... 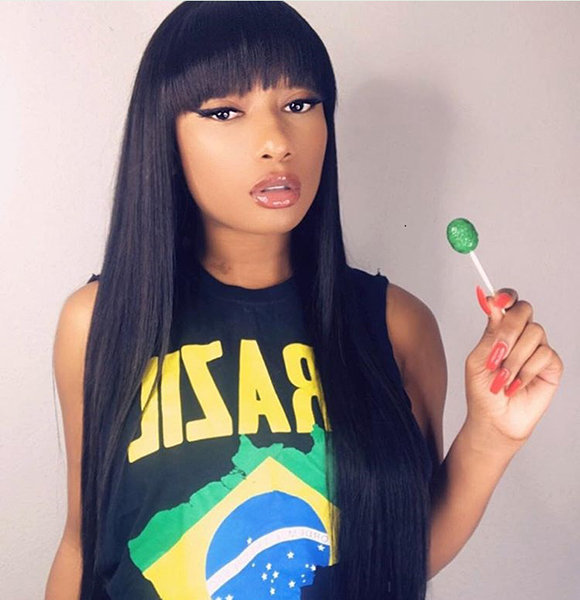 Megan Thee Stallion became the breakout female rapper when her single, Fever reached No. 10 spot on Billboard 200 in 2019. Besides her biggest hit, Megan's other songs, including Cypher Verse, No Heart Remake, and Poppin also gained tractions.

Still a college junior at Texas Southern University, she is busy juggling her education and blooming rap career.

The rapper’s real name is Megan Pete. It is speculated that she adopted the stage name, Megan Thee Stallion, due to her nickname at school.

Her friends called her Stallion due to her good looks and impressive height of 5 feet 10 inches (1.77 m).

Interestingly, her mother was also a rapper known by her stage name, Holly-Wood. Active in the rap scene between 2001 to 2007, Holly’s most famous song was a tribute to Houston area’s music legend, DJ Screw.

Courtesy of her mother’s music career, Megan got passionate in music due to her exposure to workings of a studio. The songstress’ mother had quite an impact on her life.

Although the 24-year-old was interested in a music career since a young age, her mother adviced the Like a Stallion hitmaker to complete high school and reach the age of 21 before pursuing her dreams as a musician. Being a good daughter, she took her mom’s teaching and kept her music career on hold.

After completing high school, Megan used social media to release her music and slowly started to gain attention. In 2018, she became the only female rap artist of 300 Entertainment.

In her journey, Megan’s mother was by her side. Holly worked as her rapper daughter’s manager. Sadly, Holly passed away; Megan took to Instagram on 21st March to announce the sad news.

Ever since Megan blew up in the rap scene, her name has been linked with a couple of famous individuals. She got linked to former baseball player Carl Crawford, who signed her to his company 1501 Entertainment. But, neither part reacted to the linkup news.

In March 2019, Megan dating life was again under scrutiny as Trey Songz tweeted a flirty message referencing her song, Big Ole Freak. However, she shut down the rap star with a quick reply that he couldn’t handle her.

Amidst the several rumors, the female rapper was also linked to Moneybagg Yo. His bizarre appearance on her Instagram Live feed and their alleged club appearances had set tounges wagging. In July 2019, Megan put all the speculation to rest and confirmed her romance via posing with Moneybagg Yo on Instagram.

The rapper of African-American ethnicity got her career start by posting raps on Instagram. She also built a loyal fanbase in SoundCloud.

Today, she boasts an annual average income between $103.7K - $1.7M from her YouTube channel titled Megan Thee Stallion. As a rising star, she has a song, Big Ole Freak, which made it to Top 100.

Further, she collaborated with Wale and Bhad Bhabie in singles: Poledancer and Bestie. With a blossoming career, Megan's net worth is undoubtedly increasing day by day.