Melanie Sykes Regrets Dating And Turning the Wrong Boyfriend Into A Husband; Struggling For Children?

By LRU Writer | On: December 05, 2018
Melanie Sykes Regrets Dating And Turning the Wrong Boyfriend Into A Husband; Struggling For Children? Decisions regarding marriage should not be taken when in an emotional state because it is often believed that the decision made when you are emotional might be wrong.There are some decisions which cannot be redeemed, and today we have a similar story of a bad decision of television presenter Melanie Sykes.

Television personality, Melanie Sykes decision to get married to the wrong person has made her life regretful!

The twice-married woman, Melanie chose the wrong person for the second time and expressed her interest in the young toy-boy. Seemingly, she has been taking her interest seriously and has been dating the man much younger than her age.

Melanie Sykes got granted with divorce in mid-2016 from her husband of seven months, Jack Cockings. After meeting on Twitter, the couple went on for a whirlwind of nearly three months of romance and engaged in August 2012.

Melanie later tied the Knot with her boyfriend in a lavish ceremony in Dorset on 2013.

See Also:- All About Jack Maynard: His Age, Birthday, Dating Affair with Girlfriend, Net Worth and Much More Melanie Sykes met her boy toy through Twitter and got married just after a year of dating on 2013 (Photo: the sun.co.uk)

Melanie, who is 16 years senior to Jack soon got separated just after seven months of matrimonial bliss. Just a month after the divorce got finalized on May 2016, Melanie Sykes confessed about her wrong decision of getting married to the wrong person.

“The divorce was the easy bit. (The hard bit was) being married to the wrong person.”

“It’s always difficult to break up with somebody, but it’s been for the best and I knew it at the time and that’s why we’re not together.”

The mother of two, who got married twice, for now, sees no point in getting married but resists the thought as she proclaimed,

“I never say never any more, because every time I do, I end up doing the opposite thing.”

Well, this is not the first time, she made the wrong decision, but indeed she previously got divorced from her first husband.

Before getting married to Jack, Melanie was previously married to actor Daniel Caltagirone. The couple tied the knot in January 2001.

She shares two children with Daniel, Roman (2002) and Valentino Luca (2004). Their younger son Valentino was diagnosed with autism in 2006.

Years after matrimonial bliss, the pair divorced on 2009 citing ‘unreasonable behavior’ as the reason, but now the split seems to be amicable as they appeared together on This Morning on June 2016 where they talked about their son who has high functioning autism, as per Melanie Sykes.

The pair talked about their search for a school for their autistic child. Melanie explained,

“He is considered to have highly functional autism so when he spent a week at a school just for those with autism, he had to be moved to the year above. He is too highly functioning for an autistic school but not high functioning enough for mainstream school.” 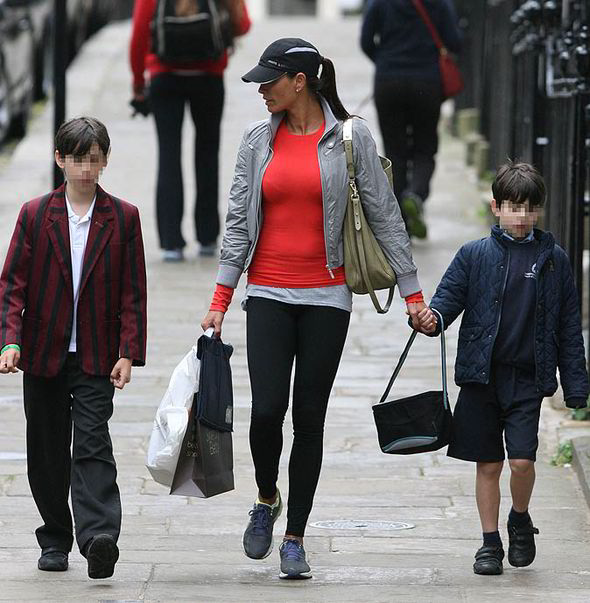 More recently, Melanie Sykes chatted about her son with Hello magazine. She mentioned how ‘much she enjoys being with her boys. She proclaimed,

“They're older, they're boys, they're very independent. My youngest has autism so he needs a little bit more help than Roman but generally they're not toddlers anymore, they're not babies you know, so my life is a lot easier in some respects... I love them being who they are right now."

And for now, Melanie Sykes is busy more into parenting and with her new show Blind Date. And she seems to be on a secret dating ground for a long period.

Dating Secretly With Two Man At A Time?

After divorcing her young husband, she now addressed her tendency to date a younger man. She admits that due to her silly nature, she prefers the toyboy beau. And here, she was swirling the romance with the Troublemaker singer Olly Murs who is 14 years her junior.

The former I'm A Celebrity star allegedly met the former X Factor star Olly through a mutual friend. The duo has been reportedly dating secretly for a year in 2017.

Despite their dating rumors, they admitted they are just friends but the insider further claimed that they are attracted physically. Addressing the ongoing rumors, he claimed :

"We’ve always been mates. We had a bit of a fling at the start of the year and that was it. We’ve continued to be friends."

But another report claimed in 2018 that the TV beauty was in secretly dating life with the German golf star Martin Kaymer on and off for the last three years. Moreover, she has not openly talked about her relationship with the Golf star but their social media post hints on their togetherness.