By LRU Writer | On: June 12, 2019
Mena Massoud first entered into the Hollywood film industry via...although he holds Canadian nationality, he is of...However, there will be significant drama if the on-screen girlfriend boyfriend turned into a real-life couple... 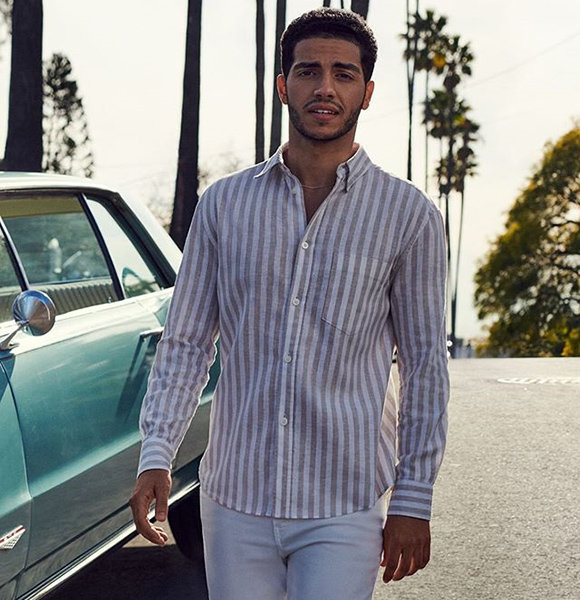 Mena Massoud first entered the Hollywood via his minor role in a TV show, Nikita.

However, things changed for him in 2018, when Disney announced his name as the lead of the live-action remake of the classic Aladdin. People became curious to know about the newbie, who had landed the coveted title role of Aladdin.

Well, he deserved all the attention as he got the part, competing with thousands of other applicants around the world via open casting. Now, riding on the Disney film's success, he is set to be part of TV shows, namely Reprisal, Run This Town and Jack Ryan.

Mena was born on 17th September 1992 at Cairo, Egypt. He moved to Canada at the age of three. Thus, although he holds Canadian nationality, he is of Egyptian ethnicity.

Well, his family consist of a loving father, mother, and his two siblings; sisters, namely Marian and Margaret.

Although Mena’s parents were supportive of his choices, somehow he couldn’t see himself pursuing an acting career. The primary reason for such thinking was growing up the Aladdin actor hardly saw representations of people like him on screen. Thus, he had apprehensions about pursuing his passion.

No wonder, Mena let go of his movie star ambitions and joined the University of Toronto. However, he couldn’t go on studying at the educational institution for long. Thus, he auditioned for Ryerson University and ended up getting an admit.

In the second university, his education began where he studied Theater and Acting. Well, his journey paid off as his portrayal of Aladdin won the hearts of the audience across the world in 2019.

Mena blew up out of nowhere as the Disney’s blue-eyed boy in 2019. Naturally, people want to privy into his personal affair and know about his girlfriend. But the Open Heart actor refuses to talk about his own life.

Well, fans loved his chemistry with co-star Naomi Scott, who played Jasmine in Aladdin. Thus, they were shipping the cute pair hard. However, there will be significant drama if the on-screen girlfriend boyfriend turned into a real-life couple. Mena Massoud poses with his on-screen girlfriend Naomi Scott at Paris premiere of the movie, Aladdin on 8th May 2019 (Photo: Mena Massoud's Instagram)

The reason behind the unlikely romance is Noami is married to her long-time boyfriend, Jordan Spence. Although Naomi and Mena aren’t romantically involved, they seem to have striked a friendship evident via their Instagram posts.

Taking about the Masters in Crime actor’s past affair, he dated a girl named Carly Sellen in the past. Sadly, the relationship couldn’t last long.

Before tasting major success, Mena had built a decent resume via his movies namely Let’s Rap, Ordinary Days and Run This Town and TV shows; Poser, Combat Hospital and The 99.

Given his increasing height in Hollywood now, he is likely to increase his net worth.

As for measurement, the megastar in the making stands at the height of 5 feet 8 inches (1.73 m) and boasts a complementing weight of 73 kg. Mena practices Coptic Christianity as his religion.