By LRU Writer | On: June 23, 2019
Meryl Davis married her longtime partner, Fedor Andreev on...champion and her husband traveled to the South of France for...took a non-traditional approach with the wedding... 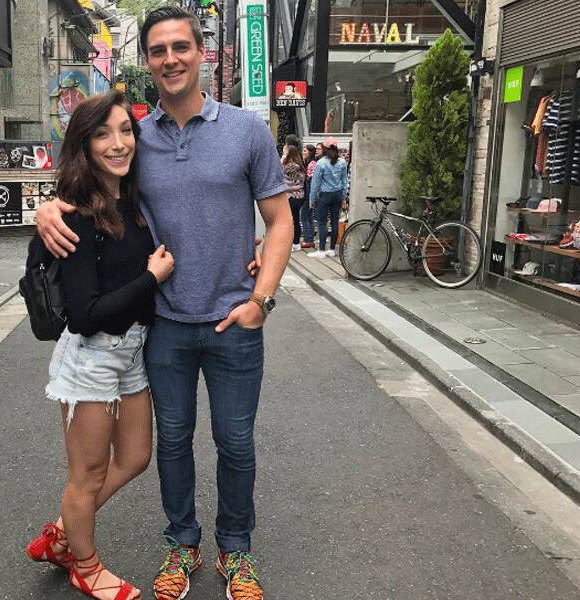 On the 22nd of June 2019, Meryl Davis married her longtime partner, Fedor Andreev. The former Dancing With The Stars champion and her husband traveled to the South of France for their wedding.

The couple took a non-traditional approach with the nuptials.

Held at the Le Mas des Poiriers, a farmhouse in Provence, the ceremony was an intimate affiar. Only 95 closest friends and family attended the event. The notable being Charlie White, Meryl's figure skating partner.

The figure skating couple opted a non-traditional wedding. Meryl and Fedor didn't avoid each other before the big day. Instead, they helped each other with their vows.

Meryl's brother Clayton served as the "Man of Honor." Meanwhile, her husband's cousin Danielle Vincent - a makeup artist by trade - was the designated "Best Lady." Meryl Davis and her husband Fedor Andreev on the day they tied the knot, circa June 2019 (Photo:- PEOPLE.com)

On the day of the wedding, Meryl donned a sleeveless Monique Lhuillier dress. Her groom, on the other hand, wore a tieless, custom-designed blue suit.

Following the ceremony, the married duo and their guests got engaged in festivities, including dining and partying. Post dinner, the attendees danced till the wee hours of the morning.

For their first dance, Meryl and Fedor picked a remake of Elvis' "Can't Stop Falling In Love With You." With their parents, they slow danced to "My Girl." Speaking to PEOPLE, the newlyweds revealed that they postponed their honeymoon until either fall or winter.

How She & Her Husband Got Engaged?

Meryl and her husband Fedor began dating in 2011. Six years later, they got engaged.

More On The Story:- They're Getting Married! Ice Dancer Meryl Davis is Now Engaged to Her Boyfriend of Six Years, Fedor Andreev

Sharing a snap of her hugging then-boyfriend Fedor on Instagram, the former Olympian gold medalist announced the engagement. In the very post, she showcased a gorgeous engagement ring.

Earlier that year, Meryl and Fedor's romance took a giant leap as they adopted a sheep-doodle dog.

A native of Moscow, Russia, Fedor is the son of Meryl's longtime trainer Marina Zoueva. An ice skater himself, the Russian-Canadian began working as an entrepreneur after the retirement.

Meryl was born in 1989 in Michigan, US. As a kid, the 32-year-old struggled with dyslexia. It mattered none as she excelled in figure skating. Her five feet and two inches (1.57 m) height gave her a slight advantage.

From The Same Sports:- Mirai Nagasu Boyfriend, Net Worth, Parents

The duo went on to forge a formidable partnership, winning numerous gold medals at the multiple Olympic Games. Unsurprisingly, they got romantically linked too. But, amid the rumors, they stayed together as best friends and managed to bag several mantels at Four Continents and Grand Prix championships.

On top of that, Meryl's 2014 "Dancing With The Stars" win further cemented her superstar status. She boasts $2 million wealth in net worth.