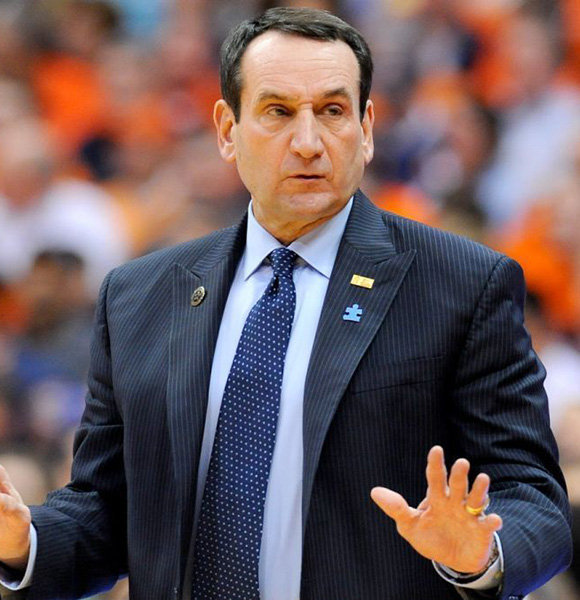 Undoubtedly, he is the highest-paid coach in college basketball with a whopping annual salary of $7.04 million.

Coach K seems like a guy who never makes any mistakes. Well, not so, the first time the Coach took his wife, Carol ‘Mickie’ Marsh, to a formal date, he pissed her off big time.

It was a Chicago Bears exhibition game, and after he picked Carol, a pretty flight attendant, Coach K told her that she was his third choice.

No wonder Carol made sure it never happened again, and the couple tied their knot on the day of Coach K's graduation in 1969. Mike and Carol have three daughters and nine grandchildren. The duo celebrated their 35th wedding anniversary in June 2004, in Duke Chapel, where they renewed their wedding vows. Mike Krzyzewski with his wife Carol “Mickie” Krzyzewski (in the middle) and daughters in 2016 (Photo: Heavy.com)

The oldest among the three, Debbie joined the Duke staff in 2002. She became Assistant Director of Athletics for Special events and Director of the Legacy Fund for Duke in 2015. Debbie is married to Peter Savarino and has four children named Joey, Michael, Carly, and Emmie. Michael is set to become a walk-on player for the 2019-20 season.

Mike's middle child, Lindy, is also working for the Duke Basketball team. She is married to Steve (full name) and has three sons, viz. Quin, Remington, and Caden.

The youngest of the siblings, Jamie, majored in English from Duke University and is married to Chris Spatola, a U.S. Army Captain. Jamie's husband, Chris Spatola, is the Blue Devil’s director of basketball operations.

She even co-authored two books with her star father. Jamie commented on 2017 about her father as:

“Without question, my dad is very intense on the surface. You see him yelling at a ref or in a huddle with his team in an intense moment and he’s red in the face and angry. And that is the exterior. That is who he is. It’s an accurate portrayal. But that surface is very thin. And if people made any effort to get to know him beyond what they saw on TV, if they had a 2-minute conversation with him, they’d see that humorous side of him, his fun-loving side.

Jamie is a mother to two children: a son and a daughter and lives with her family in Durham, North Carolina.

His mother was a longtime resident of Ukrainian Village, and his father, William, was the captain of the Chicago Fire Department. Raised as Catholic, Coach K follows the Catholic religion.