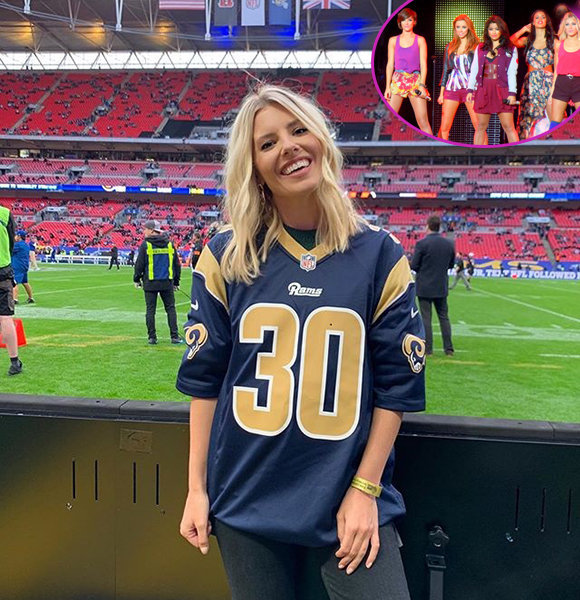 English singer Mollie King initially started as a contestant in the British talent show, The X Factor in 2005. But later, she gained massive recognition as a singer of the girl group The Saturdays, which is known for hits like What About Us and Just Can't Get Enough.

In 2017, Mollie also appeared as a contestant in Strictly Come Dancing, where she made it to the semi-finals.

Mollie King is not a married woman yet. But, she has had a fair share of romantic affairs in her life.

As of now, she is dating cricketer Stuart Broad. The couple sparked dating rumors since April 2018 but went separate ways after five months together. However, they eventually got back together in March 2019. Mollie King with boyfriend Stuart Board in April 2019 ( Photo: mirror.co.uk)

Now, Mollie and her on-and-off-again boyfriend seem to be going pretty strong.

Before Stuart, Mollie sparked rumors with her Strictly Come Dancing's dance partner, AJ Pritchard. However, AJ denied those rumors and clarified that they were never an item.

Previously, Mollie was in an on and off-again relationship with model David Gandy from 2011-2016; the couple eventually parted ways as David was not prepared for a long term commitment.

Well, Mollie's list of former flames also includes a royal name. In 2012, Mollie made it to the headlines of almost all tabloids following her fling with Prince Harry. They had initially been set up by Harry's cousin Zara Phillips, and the relationship was supposed to be a secret.

But the mystery eventually unfolded itself, and it didn’t work out for them.

Born in June 1987, Mollie is the third daughter of accountant father, Stephen King, and a doctor’s secretary mother, Susan. The singer's elder sisters are Ellen and Laura King. Mollie is very close to her sisters Ellen, now a banker, and Laura, a lawyer.

You May Be Interested:- Maelyn Jarmon Boyfriend, Husband, Parents, Tour

Sadly, their parents, Stephen and Susan, divorced when the starlet was eight years old.

But, her parents managed to provide a nurturing childhood to Mollie. Since a very young age, she wanted to go into show business. However, she also possessed another talent- skiing.

And the later one became obvious first, after Mollie impressed her family, with her skiing on holiday at the age of ten. Then, she got enrolled in training for professional skiing. After that, she trained and competed with the junior British ski team for seven years.

As Mollie grew up, she developed a passion for music, and her sights were fixed.

Further, the beautiful singer also has amazing hair. But in July 2018, she chopped off her long blond hair into a short bob. However, she totally rocked the short hair cut too.

For You:- Heather Hemmens Parents, Personal Life, Net Worth

Moving on to her career, Mollie, who started as a contestant in a reality show later joined a girl group- The Saturdays alongside Vanessa White, Frankie Sandford, Rochelle Humes, and Una Healy. The band released its debut studio album, Chasing Lights, in October 2008, which went on to sell over 400,000 copies.

Apart from her music career, Mollie is also and businesswoman. She has a clothing line under the label Loved by Mollie.

During her career, Mollie has successfully accumulated an estimated net worth of $1.9 million.