By LRU Writer | On: January 13, 2019
At the 1976 Olympic Games in Montreal, Nadia Comaneci...From getting invitations to attend 76th Golden Globe Awards to receiving the Carnegie's Great Immigrant Award, today... Nearly a decade after the wedding & five years after Nadia's naturalization as a US citizen, the Comaneci-Conner family grew... Nadia, whose net worth exceeds the 7-figure mark, and her 1984 Olympic gold medallist husband got married in... 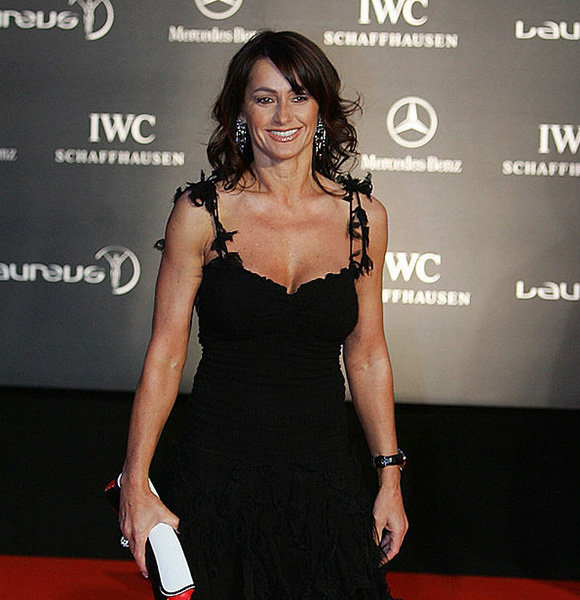 At the 1976 Olympic Games in Montreal, Nadia Comaneci became the first gymnast in Olympic history to garner the perfect score of 10.0 for her execution on the uneven bars. By the end of the competition, the Romania native recorded the feat six times over and thus, became the youngest all-around Olympic gold medalist ever at the tender of 14.

A people's champion, Naida's popularity helped push the song "Nadia's Theme (The Young & the Restless)" - a record that accompanied her floor exercise during the competition - towards a Grammy win.

Less than a decade into her decorated career, the world-famous gymnast decided to hang up her skates. Her turbulent post-retirement life saw her get defected to the United States and rekindle a romance with fellow Olympian.

A year before making her Olympic debut, Nadia participated (& won) the American Cup held in New York in 1976.

Explore:- Bridget Lancaster Bio: From Age To Family Details & Net Worth, All Revealed

Standing beside her at the media podium to collect the honors was none other than her future husband Bart Conner, a fellow winner in the competition. Recognizing the undeniable chemistry between the two, a keen photographer asked the latter to kiss her; and to which, he obliged without giving the request a second thought. Neither she nor Bart knew at the time that one kiss had marked the beginning of a tedious yet successful romance between the two. Then, the pair went on to garner successful career as Olympic medal-clad gymnasts; the former more so than the latter.

And, when the time came to hang up her staking boots, Nadia didn't face the smoothest of transitions. Because of the restrictions imposed on her by then-Soviet state, she couldn't travel freely, which prompted her defection to the United States seeking asylum in 1989.

Among other things, the move provided her opportunity to rekindle a romance with childhood sweetheart Bert.

Nadia, whose net worth exceeds the 7-figure mark, and her 1984 Olympic gold medallist husband got married in 1996 in her native land. Romania - by then, no longer under the control of Soviet state - issued a public holiday-esque festivities commemorating the wedding of its most significant export.

You May Also Like:- Nancy Snyderman, A Family Woman Leaves NBC; Where Is She Today?

Nearly a decade after the wedding & five years after Nadia's naturalization as a US citizen, the Comaneci-Conner family grew by three as the gymnasts' duo welcomed their first and only bundle of joy, a baby boy named Dylan Paul on 3rd June 2006. Nadia alongside her husband & their son pose for a family portrait on 2018 Christmas (Photo:- Bret Conner's Twitter)

Today, besides raising their son Dylan, now age 12, Nadia and her husband, Brat actively campaign for the betterment of society at large.

Iconic Gymnast Couple Now: What Are They Up To Today?

With the goal to "encourage families to take ownership of their health through activities that embrace Olympic, Paralympic, and Special Olympics ideals with an emphasis on sports, nutrition, and wellness," she along with her husband is the founder of The Bart & Nadia Sports Experience -- a weekend hosting numerous events emphasizing on "sports, health & wellness."

Discover:- Nicole Scherzinger Boyfriend Now; Who Is She Dating Now?

Both Nadia, now age 37, and Brat are staunch supporters of Special Olympics & have also made numerous TV appearances promoting the importance of the competition.

The married duo's contributions, however, hasn't gone unnoticed. From getting invitations to attend 76th Golden Globe Awards to receiving the Carnegie's Great Immigrant Award, today they have become iconic figures in the pop culture because of their philanthropy.