By LRU Writer | On: August 13, 2018
Australian tennis player, Nick Kyrgios became an instant superstar when he defeated the then No.1 ranked Rafael Nadal at the 2014 Wimbledon Championship... A committed man, Nick went through rough patches in his relationship with the girlfriend... Details of his parents, age, height and more. 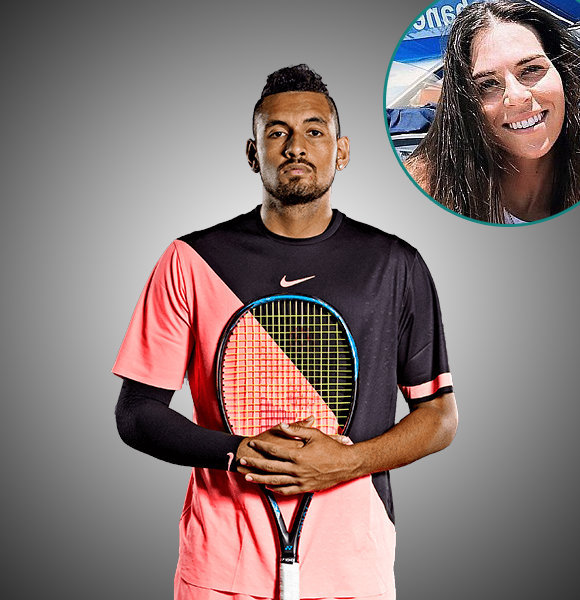 Australian tennis player, Nick Kyrgios became an instant superstar when he defeated the then No.1 ranked Rafael Nadal at the 2014 Wimbledon Championship. Nick was a relatively unknown figure struggling with his ways to reach the top, but after the victory against Nadal, his career got an instant boost.

Not only viewers became interested in Nick's professional career, but fans also grew curious about the personal lives of the young tennis star. A committed man, Nick went through rough patches in his relationship. However, the issues have been fixed now, and Nick can boast his romance with his beautiful girlfriend, who also happens to be a professional tennis player.

To know all about the life of Nick Kyrgios, continue with this article as it covers the personal aspects of the young player with the details of his parents, age, height and more.

Off-And-Off-Relationship With Girlfriend, Intends On Proposing

Nick, who ages 23 and celebrates his birthday every year on 27 April, started dating Croatian tennis player Ajla Tomljanovic in 2015. Although the pair has not mentioned how they first met, it can be deduced that they grew close due to their mutual love for tennis. Although the couple initially kept their relationship low-key, they began to show public display of affection (PDA) and even flaunted each other on social media in 2017.

On 29 May 2017, Nick shared a portrait of the lovers from their vacation in Paris, France. In the Instagram picture which featured both Nick and Ajla, he could be seen gently kissing his girlfriend on the cheek. However, soon after their visit to France, the couple reportedly broke up. The speculations of their split surfaced in July 2017 when Nick was seen exiting a nightclub in London along with two teenage girls.

But their on-again-off-again relationship was not about to end as Nick and Ajla re-emerged as a couple, few months after their alleged separation. Nick, who stands at the height of 6' 4" (1.93 m), confirmed the news of them getting back together as he posted a picture of the two kissing at a nightclub in November 2017. Whatever the issues may have been which caused their split, it seems like the couple has figured it out and resolved the matter as they are happy and comfortable in their dating life. Further, Nick and Ajla were also spotted in January during a training session in Brisbane where both of them practiced for their upcoming matches.

During the session, the pair looked cheerful and even chatted up lovingly during the breaks.

Don't Miss:- Is Sofia Carson From Descendants 2 Dating Anyone? Has Cleared Rumors Of Turning Co-Star into Boyfriend?

A source even claimed that Nick had planned on proposing his girlfriend in May 2017 during her 25th birthday and even his mother had approved of the match. However, it has not been revealed if he indeed proposed to her or not.

Nick, who possesses a mixed ethnicity (half-Greek and half-Malaysian), was born in Canberra, Australia as the youngest child of his parents: George and Norlaila. Norlaila explained that Nick was a fat kid during his childhood and would eat an unhealthy amount of during his early days. He has two older siblings. Nick's elder brother, Christos works as a lawyer whereas his sister, Halimah is an actress.

Nick's family has always been supportive of his tennis career. Further, they are also regularly seen attending Nick's games. His mother, Norlaila follows her son to every event he participates and remains there to motivate her.

Nick even mentioned that him defeating Rafael Nadal was the result of Norlaila underestimating her son's abilities and skills. Nick said that his mother thought he could never defeat Rafael which inspired him to play harder. In a way, even Norlaila's criticism was a source of inspiration for Nick.

Nick's father George and brother Christos also regular viewers of his matches and often visit the courts to support Nick in his games.