By LRU Writer | On: September 13, 2019
To date, Nicollette Sheridan is remembered for her iconic role as Edie Britt on the cult hit show, Desperate Housewives. No wonder...The actress’ first major relationship was with Clash of the Titans actor Harry Hamlin. The pair dated and eventually got married on...After an unsuccessful marrige and two failed engagement, the TV actress kept her dating life under the radar. Thus, she... 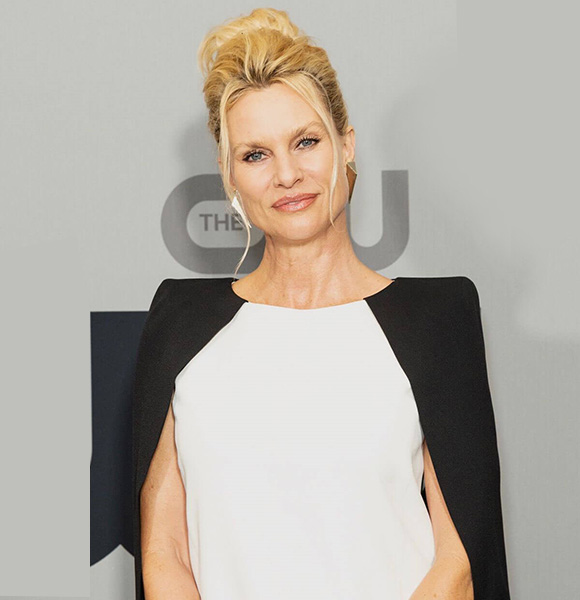 To date, Nicollette Sheridan is remembered for her iconic role as Edie Britt on the cult hit show, Desperate Housewives. No wonder the actress’ performance fetched her a Golden Globe nomination and two Screen Actors Guild Awards win.

Post her departure from the show; she became involved in TV movies, namely Lee Mathers, Honeymoon for One, and All Yours. However, in 2018, she came back with a bang in the TV show Dynasty’s reboot as Alexis Carrington.

While her character was well received, Nicollette departed mid-way from the show’s second season in 2019. Sadly, she left to care for her ill mother.

Nicollette’s personal life has seen a lot of ups and downs. She got involved in serious relationship multiple times, but they didn’t work out.

The actress’ first significant relationship was with Clash of the Titans actor, Harry Hamlin. The pair dated and eventually got married on 7 September 1991. However, the pair’s bond didn’t last even a year as they got divorced in August, the next year.

Post the split, Nicollette of age 55 moved on with Michael Bolton - American singer. For those unaware, he even attended the actress’s wedding with Harry.

Well, the pair with complicated history dated from 1992 and ended their romance in 1997.

After the failure of two long relationships, the actress gave love another chance. She got engaged to Swedish actor Nicklas Soderblom in 2005. However, Nicollette didn’t walk the aisle with her boyfriend as the pair ended their engagement.

Shockingly, the Golden Globe-nominee got back with her ex-boyfriend, Michael Bolton, after her split from Nicklas. The plot thickened as the on-off couple even got engaged in 2006.

Sadly, Nicollette and her husband-to-be didn’t go through with their wedding and split.

After an unsuccessful marriage and two failed engagement, the TV actress kept her dating life under the radar. Thus, she shocked everyone when she got secretly married The Leap actor, Aaron Phypers on 12 December 2015. Sadly, the married pair separated in just six months and eventually got a divorce in 2018.

Amidst her complicated dating history, Nicollette cannot seem to escape her ex-boyfriend, Michael Bolton. In 2019, the singer was brought into her dating narrative. It so happened that Harry - her first ex-husband- accused the actress of cheating on him with Michael.

The actress vehemently denied the allegations and termed the cheating allegation, “fake news.”

Unbothered by the scandal, she is busy dating a mystery guy. So far, Nicollette doesn’t have any children.

Nicollette had a rough start at life as her father, Arthur left the actress and her mother- Sally Sheridan - when she was an infant. Thus, she was brought up by her single mother- actress known for On Her Majesty's Secret Service.

Maybe it was her mother’s acting chops which inspired the actress of height 5 feet 7 and a half inches (1.71 m) to pursue a career in Hollywood.

Now, she is a reputed actress with over 50 acting credits and a net worth of $25 million.