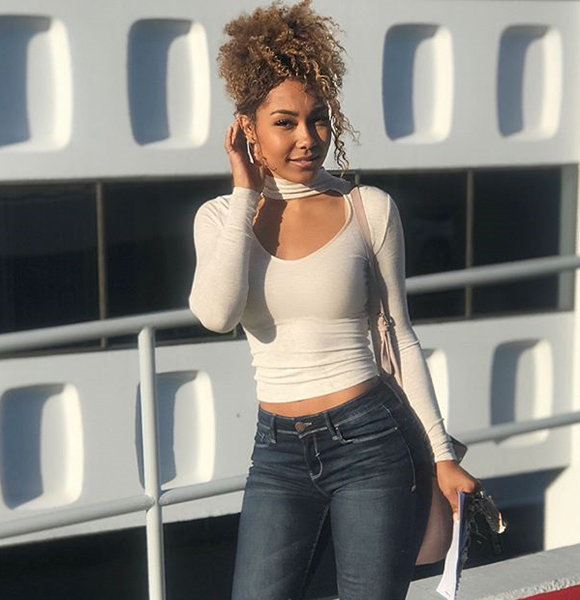 My Wife and Kids actress, Parker McKenna, welcomes her daughter at the age of 25. After being in a number of relationships, Parker McKenna has finally started her family with her partner.

Parker was in the spotlight from a very young age which led her life to be an open book and never have a private life with her boyfriend. But the news of her pregnancy was kept private until the end.

Parker McKenna has always been in the spotlight. But no one was able to find out about her pregnancy until the very end. Perhaps, she wanted to surprise her fans with the news of her pregnancy.

McKenna's pregnancy was first revealed after she and her boyfriend shared a photo of their first child on Instagram. Parker shared a one-minute video on Instagram referring to herself as "Harley's Mom."

She shared how nervous she was after finding out being pregnant and about the future. However, she was ready for the adventure and a new chapter in her life. She talked about how God had blessed her by choosing her to be Harley's mother.

After the announcement, she shared photos from her maternity shoot. She also sent a message to her fans about how her body transformed during her pregnancy and after she gave birth and how motherhood has been the best thing that has ever happened to her. She wanted her fans to be grateful for their body's ability to carry life and to let go of insecurities. As we know about her pregnancy, what about her baby father?

Who Is Parker McKenna's Husband?

Parker is not married, but she is currently living with her boyfriend, Jay Jay Wilson, and the couple shares a daughter together. Parker and Jay have been in a romantic relationship since 2019, and to date, there is no sign of separation between the two.

Both of them have kept a low profile regarding their relationship, but the pictures they have uploaded show they are living a happy life together. The pair regularly flaunt their love on Instagram.

After being a mother, Parker has shared moments of her baby and boyfriend together having their family times and adventures. Parker's holiday picture with her boyfriend and daughter. (Source: Instagram)

Before settling down for a family, Parker has dated different men before her current relationship.

Parker was rumored to be in a relationship with YouTuber Christopher Sails in early 2018. However, they denied it at first but later posted a video of them admitting to dating and Parker getting recognized as Chris's girlfriend. Further, Parker also posted a picture on Instagram in which she could be seen cuddling with Chris' son in March 2018. They were seen as a happy couple, with Parker getting along with Chris's son.

However, things took a turn when the YouTuber was arrested for allegedly assaulting his girlfriend in 2018. According to Parker, her then-boyfriend, Chris, slapped her multiple times, strangled her, and slammed her onto the ground. The reason behind such an intense altercation was a DM from another man on Parker's Instagram.

Fans were shocked when Parker revealed that her boyfriend, Chris used to beat her before, and it was not the first time in their relationship.

After the dispute, Parker ended things with her ex-boyfriend and moved on with her life.

Before dating the YouTuber, Parker was in a short-lived relationship with rapper, Problem. Parker was 23 years old when she began dating rapper Problem, who was ten years older than her. However, they only dated for a while in 2017 and parted ways the same year.

Previously, the former child actress also dated actor Mandela Van Peebles in 2013. The relationship surfaced after the famous blogger Sandra Rose accused Parker of being bisexual. Her mother sent a letter describing her daughter's sexuality and revealing her affair with Mandela in her defense. However, Parker and the actor's romance didn't last long, and the two separated after dating a while.

Parker always has her family's back in her hard time. Let us know more about her family.

Born as the third child of Rodney Posey and Heather Stone, Parker has four siblings. She has two older siblings: sister Dilynne and brother Khari, along with two younger brothers: Jake and Cal.

Parker shares an intimate bond with her family, and her father is her dearest. She frequently flaunts her relationship with her dad through social media. On 18 June 2018, Parker shared a throwback picture with Rodney expressing her love and wishing him a "Happy Father's Day." She started her acting journey at an early age because her mother used to take her to auditions which led to her first commercial job for the Kodak company.

After playing Kady Kyle in My Wife and Kids, an American sitcom, she gained wide recognition.

Parker has not mentioned many details about her other family members but is supposed to be very close with them. Meanwhile, she has accumulated a net worth of around $1.5 million and is helping her family in their financial matters.

Recently, she has started her own family and given her daughter the same love and care her parents gave her. But, she is yet to be married.

Besides, her fans are waiting for Parker to marry her now-boyfriend Jay after seeing their romantic pictures together. We hope they tie the knot soon.

We will surely give you more updates on her life. So be with us to know more about Parker McKenna.