By LRU Writer | On: October 04, 2018
The 1996 Republican Party presidential candidate campaign by then-politician Pat Buchanan, in many ways, paved the road for the Donald Trump...Following the crushing defeat in the 96' primaries, Pat - a columnist and an author of a dozen books - ran...Pat, age...his experience of living under numerous presidents' administrations in separate books...As of 2018, the former Crossfire host has an estimated net worth of... 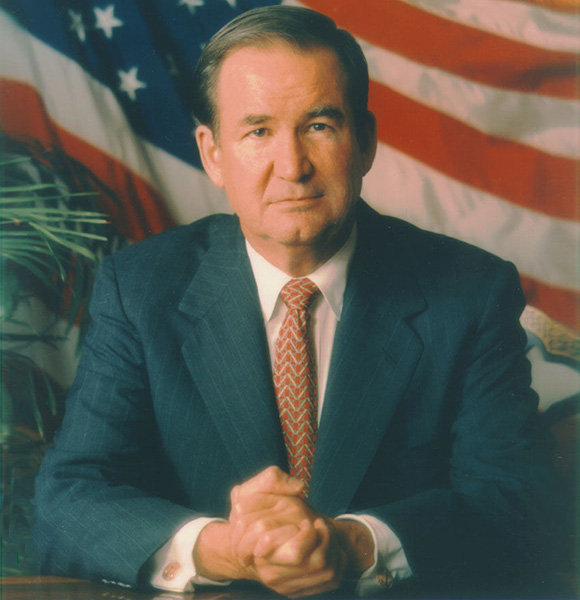 The 1996 Republican Party presidential candidate campaign by then-politician Pat Buchanan, in many ways, paved the road for the Donald Trump to run a campaign ladened with populist ideologies. Trump's 2016 presidential campaign essentially exploited the blueprint drawn by Pat and his cohorts.

Following the crushing defeat in the 96' primaries, Pat - a columnist and an author of a dozen books - ran on the Reform Party ticket in 2000 U.S. Presidental Election. Many presumed that he had the pedigree to go toe to toe with America's elite politicians for, arguably, the most powerful position in the world.

In hindsight, his campaign was a precursor to today's political climate; one that is characterized by populist doctrines.

Let's get into Pat's wikis to learn more!

Pat, age 79, never lived up to the expectations set by Nixons and Regans - both employed him as an advisor during their tenure - regarding his political career. That said, he used his experience in politics to become one of America's most revered columnists.

Using his blog, he continues to churn out political columns at a frightening speed even though he's pushing 80. A true republican at heart, Pat is a staunch supporter of Trump's Presidency. Pat waves at the crowd after his introduction in the at a rally in 1996 (Photo:- blogs.mprnews.org)

And why he wouldn't be. After all, Trump's populist ideologies mirror that of his 1996 campaign for Republican Party presidential candidacy. Much like Pat, Trump emphasized the matters of controlled immigration, all the while expressing nationalist sentiments. Critics have even drawn parallels between Trump's trade policies to that of Pat's.

Greg Muller, Pat's communication director on both of his campaigns, put it more eloquently when he quipped:

“Pat was the pioneer of the vision that Trump ran on and won on.”

Not only did Trump use his blueprint, he even "stole" Pat's slogan; Make America Great Again - the slogan which sums up Trump's 2016 campaign - is a direct rip off of Pat's 1996 motto, Make America First Again.

Pat, however, seemed more jovial with the fact that someone had realized his dream when he sat down with Andre Chung in 2017 for a Politico interview, and where he said quoted as saying:

"I was elated, delighted that Trump picked up on the exact issues on which I challenged Bush. And then he goes and uses my slogan? It just doesn’t get any better than this."

Before Trump's win, the celebrated political commentator had a word of advice to then-Republican Party Presidental nominee, Trump. Talking to Washington Post, he said:

"For Trump to win, I would hammer the illegal immigration issue, securing the border, renegotiating trade deals that have cost us factories, jobs, and rising wages, and after securing the party base, go for victory in Pennsylvania, Ohio, Michigan and Wisconsin, by campaigning against the Clinton trade policies that de-industrialized Middle America and on a new Trump trade agenda to re-industrialize America."

All in all, considering how Trump policies are the spitting image of his, chances are: a book chronicling Pat's experience during Trump's term at the White House might be in works.

Previously, the renowned columnist - who follows two people on Twitter - had chronicled his experience of living under numerous presidents' administrations in separate books. His foray into literary art began in 1973 with the publication of the book titled The New Majority: President Nixon at Mid-Passage. Pat on the cover of November 1995 issue of Time Magazine (Photo:- Time.com)

Most of his books were received well upon their release. And as a result, he has used the critical reception to his books as leverage in negotiating the books deal with the publishing houses. As of 2018, the former Crossfire host has an estimated net worth of $7 million.

Moving on to his private life, he's married to former White House staffer Shelley Ann Scarney for 47 years now. Likewise, his wiki reveals that he has one known sibling, a brother named Hank Buchanan, who made a headline in 1999 after threatening people with a handgun.