By LRU Writer | On: April 26, 2019
Fox News' Senior Political Analyst Pete Hegseth isn't a marriage...And even after two failed marriages, the FOX & Friends Weekend co-host...The news of their divorce came to the general public as a surprise...Pete and his ex-wife, Samantha are currently going through...But with the battle for their children approaching... 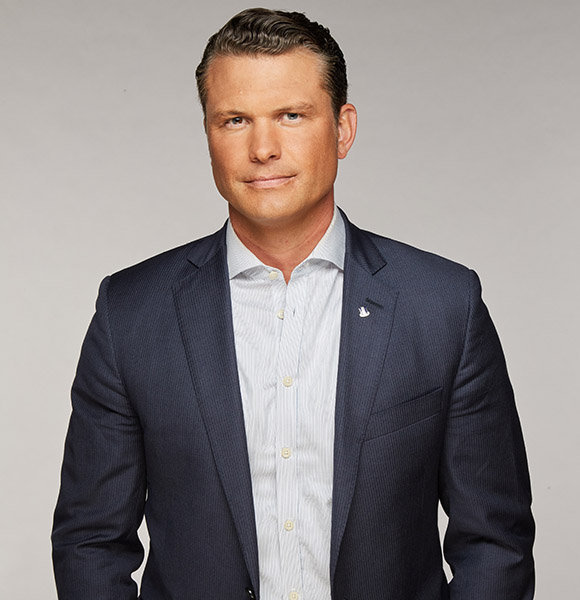 Fox News' Senior Political Analyst Pete Hegseth isn't husband material, it seems - not for his lack of trying though.

Neither of his two marriages saw the light at the end of the tunnel. And even after two failed marriages, the FOX & Friends Weekend co-host has relentlessly pursued women in the hope that he might make it till the end with the elusive one.

Pete, who was twice listed among the men considered by Donald Trump to lead Veteran Affairs, has a convoluted married life. In addition to being married twice, his name has been mixed up in controversies including lawsuits and alleged adultery committed against his previous wives.

Divorces are ugly as it is; adultery tends to quantify its ugliness exponentially. Fox News' very own Pete Hegseth should know better than engage in such a vile act.

Pete's ex-wife, Samantha filed for divorce in September of 2017 after learning about her husband's love child with a Fox News executive.

What has befuddled Pete's fans the most is the fact that their idol had once referred to Samantha as his "ultimate wife" in a 2012 interview. He was quoted as saying:

"I’ve been divorced and conceived a child out-of-wedlock with my second and “ultimate” wife..."

Pete - whose net worth is believed to be in seven figures - and his ex-wife, Samantha are currently going through a divorce as they look forward to sharing the custody of three kids, namely: Gunner, Bonne, and Rex. Neither party has engaged in a public campaign of any sort to defame each other yet.

But with the battle over the children's custody approaching, all that could change in no time. Pete poses with his sons around his both arm for a photo (Photo: Pete Hegseth's Instagram)

Pete's bio reveals that his earlier marriage was less of a hassle as the Fox News' Senior Political Analyst's marriage to his first wife, Meredith Schwarz didn't bear him any children.

The Princeton University Alum had married in March of 2004, three weeks before he was sent to the infamous U.S. detention facility in Guantanamo Bay for military duty. After six years together as a married couple, Pete's high school sweetheart called it quit in 2009.

For a guy who has been married twice, he has never been fully able to embrace the quirks of having a wife. His inability to properly place his wedding ring on his fingers is telling his intent as a married man.

In December 2017, a fan questioned the placement of his wedding ring when he tweeted a picture of him wearing it in his index finger as opposed to its usual place -- the designated ring finger. The fan, who goes by "Delray" asked:

"Hey @PeteHegseth why do you wear that ring on your index finger?"

Hopefully, his present girlfriend and the woman initially referred to as an unnamed Fox News executive, Jennifer Rauchet will help him better place his wedding ring. The pair welcomed a baby daughter, Gwen in August of 2017. 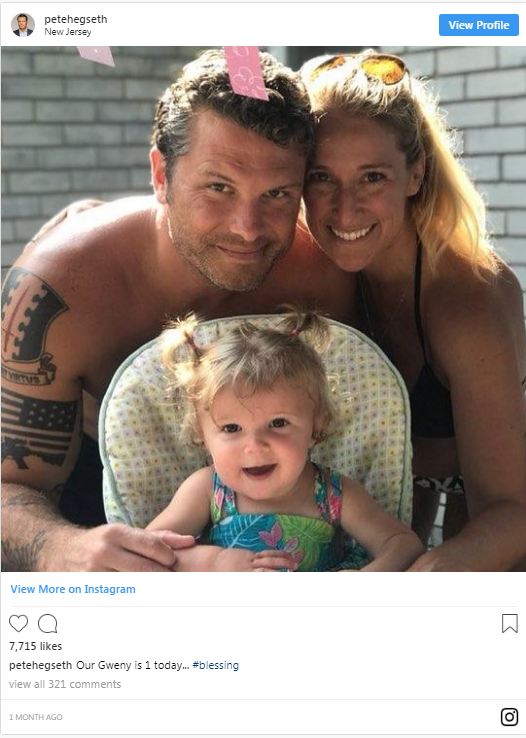 To put it in context, the birth of Gwen came a month after Pete's ex-wife, Samantha had officially filed for the divorce.

Pete and his present girlfriend, Jennifer don't seem to mind the toxic air surrounding their unethical union as both appear gleeful whenever pictured together.

The TV host was reportedly the center of controversy when he was found to preach American family values to appeal towards the conservatives. Despite being a two-time divorcee and a father to a child out of wedlock, he allegedly presented that to preserve the sanctity of marriage as one must refrain from divorce.

Well, Pete was never new to alleged dubious views, he shocked the audience in February 2019 when he revealed that he hadn’t washed his hands for ten years.

According to the TV host, germs weren’t real, and he could not get sick via bacteria from his hands.

People believe that Pete’s claims regarding family values and challenging science are to present himself as the perfect conservative. No wonder he is allegedly president Trump’s favorite.

Although the blames surround him that he fakes his antics to appeal to a  group of people, Pete seems unbothered by it. He continues to carry on with his life without paying heed to the naysayers.