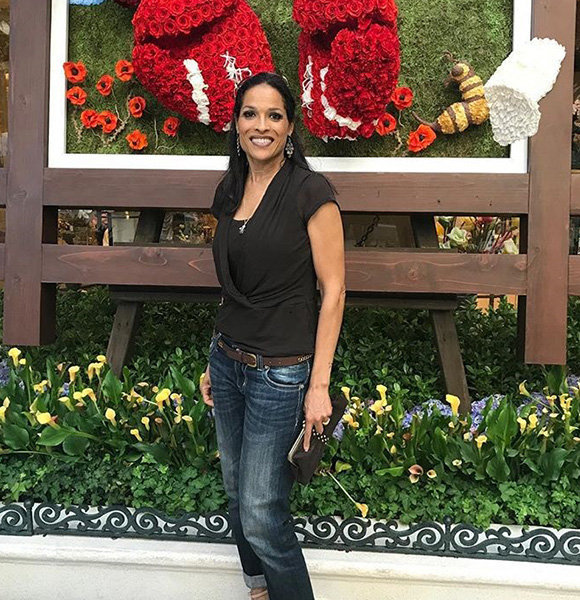 The late boxing legend Muhammed Ali is the recognizable figure known as the world's best sporting figure and idol to many. But all may not know about his middle-aged daughter, Rasheda Ali--who is determined to keep her father's legacy alive.

Author and the television personality is best known for her appearance in the American reality show, Love and Hip Hop: New York on VH1.

Moreover, the self-claimed stylist is also the media spokesperson, Parkinson's advocate and proud mother of two sons who are helping her to maintain her dad's legacy.

Rasheda Ali Walsh is one of the twin daughters of the legendary boxer and his second wife then-named Belinda Boyd in 1970. She was born in Flushing, New York in 1970 alongside her twin sister, Jamillah. Rasheda has three other siblings including her twin sister Jamillah, Maryum and Mohammed Jr.

But she has other half-siblings from her father's other marriage, namely; Hana Ali, Asaad Amin, Laila Ali, Khaliah Ali and Miya Ali. Rasheda, together with Jamilah graduated with the Mass Communication degree from the University of Illinois in the early 90s. Since the early years, Rasheda has been her father's great supporters and as a result, she walked down on her father's footsteps of wisdom. Still, she shares the positive message of her father on her Facebook.

Great Muhammed Ali's Love Interest:- Robin Quivers On Her Battle With Cancer; Tells All-Tale On Her Journey Back To Good Health

The New York native, Rasheda rose to fame with her hardworking skills rather than waving on her father's fame. Moreover, she is known for giving credit to her father for the role he played in her successful career before in death in 2016.

She is also the public speaker who provides the peace and wisdom to the people which she garnered from her father. Today, she is America's one of the accomplished women.

Rasheda is the daughter of the legendary athlete, and now she is the proud mother of athletes son!

The 48-years-old author shares two sons with her chef-husband Robert Anthony Walsh popularly known as Bob Walsh, whom she got married in late June 1997 in an elegant Muslim ceremony at Biggs restaurant's courtyard. Their firstborn son, Biaggio has already made his name as the most sought football player just at the young age of 20. At the age of 18, he had received his 10th Scholarship including the San Diego State University.

In addition to his sports career, the dashing player is also actively indulged into the modeling world after Wilhelmina Models discovered him.

Their youngest son, Nico, is aspiring to be just like his iconic granddad, Muhammad Ali. He has been training and sparring in the gym and just had his first fight in March 2016.

Another Boxer You May Like:- Victor Ortiz Relishing Family Life With Wife-Like Girlfriend! Getting Married On Card?

Nico sought to his late granddad Muhammed Ali with the video of his first ring play and he was certainly impressed by Nico's play and showered him with the sound advice.

The proud mom and daughter stated to FOX Sports in 2017:

"Now that my dad’s no longer with us, it’s even more special that he’s pursuing this career because my daddy’s looking down on him as our angel,"

She also added that his youngest son is pursuing his dad's passion. But as a mother, he never wanted him to pursue his career in fighting but it seems Nico is not going to escape from the shadow of the ring.

Both athletes brother grew up in Las Vegas with their grandfather, whom they regard as their "idol." Their grandfather created a great inspiration in their life and they indeed possess Muhammed's resume.