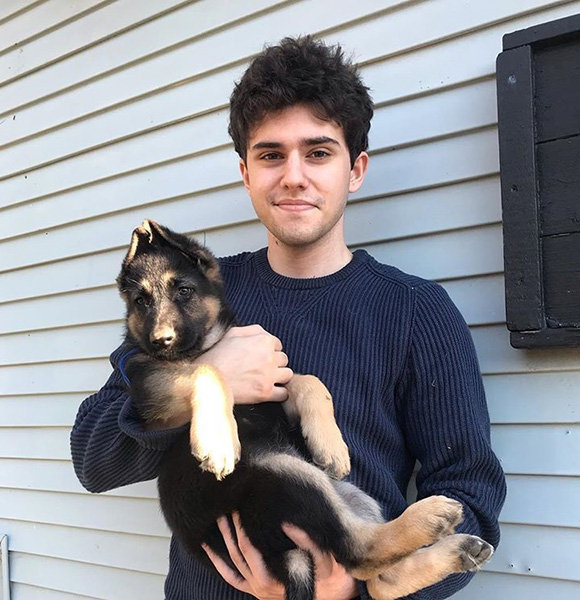 Over the last five seasons of The Good Witch on the Hallmark Channel, Rhys Matthew Bond has gained massive fame for his portrayal of the troubled yet lovable guy, Nick Radford.

Apart from his role in the fantasy fiction, Rhys has also appeared in TV shows like Heartland and The Haunting Hour. Further, for his role in the TV movie The Unauthorized Saved by the Bell Story, the actor won a Joey Award in 2014.

Rhys Matthew Bond was born on 11 June 1998 in London, England. He was raised in a family of four alongside his younger sister named Zoe Farah Bond. His parents are Neil and Tirana Bond. Although Rhys portrays the character with many family issues in the Hallmark show, in reality, he is an absolute family guy. From his social media posts, it's pretty apparent that he shares a very close bond with his parents and sister Zoe.

Rhys has garnered massive fame and fan following at the mere age of 21. Hence, it is no surprise that the majority of people are curious about his relationship and dating affairs. But to his fan's dismay, the young artist has kept his private life pretty secluded.

Nonetheless, in 2016, there were rumors of Rhys dating his on-screen stepsister Grace Russel (portrayed by Bailee Madison). The duo was spotted spending time together in an ice skating ring in Toronto at the beginning of 2016.

However, those rumors were just baseless speculations as both Rhys and Bailee confirmed that they were nothing more than good friends. Further, Bailee went on to date singer Emery Kelly.

After that particular incident, Rhys has never been linked with anyone else. His squeaky clean dating history has ignited some gay allegations on his account. However, the young actor has never hinted anything that would back up such gay rumors.

As for his privacy regarding his personal affairs, Rhys probably wants to focus on his career rather than indulging himself in some tabloid's story.

Rhys, who boasts an astounding height of 5 feet 10 inches (1.78 m) has reached quite a height on his career at such a young age. He has many movies and TV series to his credit. Further, he is also the winner of the 37th Annual Young Artist Awards in 2016.

His exact net worth remains under wraps, but Rhys probably accumulates the average salary of $49,923. However, the young artist has a long career ahead of him. So, his net worth is likely to increase in the future.