By LRU Writer | On: July 23, 2019
Rick Fox is a Canadian but he moved to the states when he was...Legen in the court...played for LA Lakers most of his career...he is also an...has not been succesful with his relationship...has a son and a... 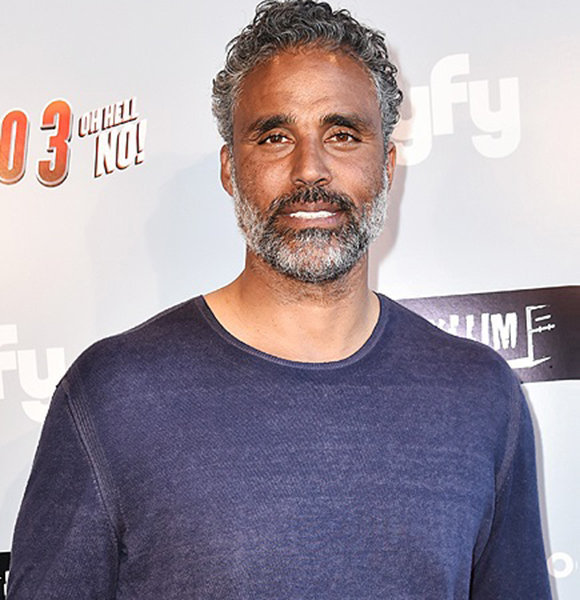 NBA legend, Rick Fox rose to fame with the LA Lakers when he played with legends like Shaquille O'Neal and Kobe Bryant.

With the All-Star team, Rick along with his teammates, won the NBA finals three years straight against Indiana Pacers (2000), Philadelphia 76ers (2001), and New Jersey Nets (2002).

Born in Toronto, Canada on 24 July 1969, Rick is the son of Dianne Gerace - an Olympic high jumper - and Ulrich Fox. Although he has made himself well-known all around the world as Rick Fox, the athlete's real name is Ulrich Alexander Fox.

He spent early years of his childhood in Canada before moving to the Bahamas with his parents. There, his family grew to four members with the birth of his sister Jeanene Fox on the 15th of February 1978. Like her brother, Jeanene is also a prominent character in the entertainment industry. She is a model and actor.

For his education, Rick attended the Kingsway Academy High School in Nassau. Later, he joined the University of North Carolina - where he earned a degree in Radio, Television and Motion Pictures.

As for his physical appearance, the star athlete has a towering height of six feet six inches (1.98m).

Despite the amount of success Rick achieved in his professional life, the same has not transferred over to his personal life. The former LA Lakers player has had his fair share of failed relationships.

Rick dated Kari Hillsman when he played for the Boston Celtics. Their relationship was kept mostly off the limelight. However, it is known that Rick and Kari have a son named Kyle, born in 1993. After the relationship ended, he was romantically linked with actress and singer Vanessa Williams. The couple fled to the Caribbean in the summer of 1999 and later married in New York City in September the same year.

The marriage ended in August of 2004 when Rick filed for divorce. However, he came out of the relationship with a daughter named Sasha Gabriella Fox born on the 1st of May 2000.

Following the pattern of his failing relationships, Ricks third romance didn't last either. He was in an affair with actress Eliza Dushku. The former pair began dating in 2009 but ended up parting ways five years later in 2014.

Thinking one step ahead of the game, Rick had divided his sources of income early on his career.

Besides his very successful career in the NBA, he is also a successful businessman and entrepreneur. Rick is the owner of an esports franchise called Echo Fox.

Rick is also a prominent actor. He has played parts in numerous TV shows and movies. Starting his acting career back in 1994 with Blue Chips, Rick has managed to keep himself among the elites of Hollywood.

With all his endeavors, the former NBA player manages to enjoy the lavish lifestyle of superstars. Rick has a net worth estimated to be around $25 million.