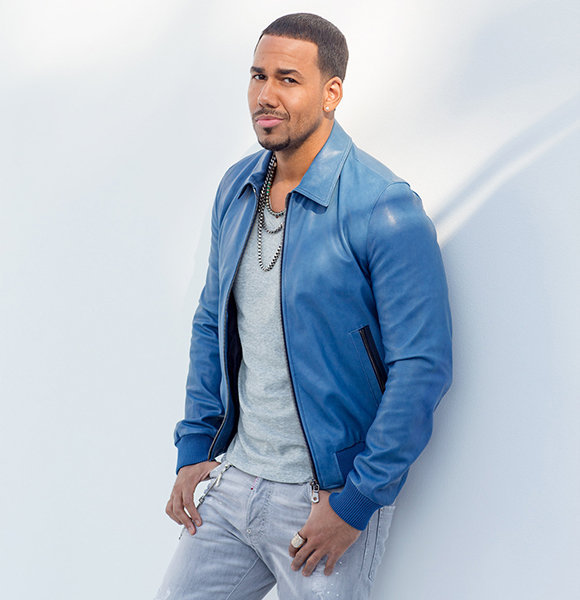 Recording artist Romeo Santos welcomed a baby - his second child - in March 2019. He revealed the happiest news of his life to his fans via Instagram on 27th March 2019.

Sharing a black and white image of the baby's feet, the "Eres Mia" hitmaker also teased his upcoming album Utopia. Romeo Santos announces the arrival of his second baby in March 2019 (source: Instagram)

Romeo, however, refrained from providing any more details on his baby, by making room for privacy.

Not only did Romeo hesitate to share information about his second baby, but he also did not find it necessary to reveal his baby mama's name, or so to say, Romeo Santos's wife.

The only known fact is that his second baby's name is Valentino Santos.

In his defense, the "You" crooner has always maintained an image of a recluse -- well, at least on the dating front. For all his fans may care, he could even be engaged to his longtime mystery girlfriend.

In 2016, Romeo sparked dating - and subsequently engagement - rumors in a rare display of PDA after putting up a snap with a yet-to-be-identified woman on his Instagram.

Five years earlier, then 39-year-old Romeo was pictured sharing quality time with a woman named Francelys Infante. This instance made everyone question if she is the mysterious baby mama Romeo has kept a secret about.

Considering how secretive the singer is about his married life - assuming he has one - it's only natural that the detractors would label him a closeted gay.

The so-called haters often failed to take notice of his past romances with women and kids born from the said relationships. Gay or not, Romeo remains a dedicated father to his two children and a hero in the eyes of his fans.

Besides his newborn, Romeo is also a father to a teenage son named Alex Damian Santos.

Per gossip, Alex is the son of his short-lived affair with Samantha Medina. Additionally, there's a rumor floating around which suggests that Romeo' wife was Samantha Medina, and they were a married couple for a brief period of time.

Nevertheless, by the Aventura lead singer's admission, he did not adapt to fatherhood all too well early on. Recounting the initial jitters he suffered as a new father, Romeo once revealed:-

“I enjoy being with my son and I love him, but at the moment I was so young, and the only thing that I could think of was the music career.”

With or without the support of a wife or wife-like partner, he continues to grow into a complete father figure to his two kids. In return, his music too continues to evolve.

Why Did Santos Leave Aventura?

Romeo formed the band Aventura in the year 1996 with his cousin and friends including Henry Santos, Lenny Santos, and Max Santo. He was the main singer, songwriter, and co-producer of the band.

Their first album came in 1999 with the fusion of hip hop and R&B. Then, in 2002, they released their song Obsesión, which garnered huge success on international charts.

In 2009, the band was invited to the White House to perform for the 44th President of the United States, Barack Obama.

Over the decade, Aventura has come up with five albums. Their international hit include "Cuando Volverás", "Un Beso", :Amor de Madre", "Los Infieles", "El Perdedor", and many more.

Unfortunately, the band split in 2011 with a mutual decision to pursue solo careers. However, they reunited in 2016 for the last time and put on an amazing concert for the entire month of February at the United Palace Theater in Big Apple.

Romeo started his solo career in April 2011, signing a contract with Sony records. His debut song 'You' from the album Formula, Vol. 1 was released on 9 May. His other singles from the album include Promise, which topped the Tropical Songs chart, and Hot Latin Songs.

With all these works, Rome Santos has accumulated a net worth of $30 million according to celebritynetworth.

A proud Latino, the New York native's ethnicity is the result of his parent's marriage. His father, Francisco, is of Dominican heritage, while his mother, Lidia, is a Puerto Rican.

Witnessing the star's flourishing career and happy family life we cannot wait to update you guys more on Romeo Santos.