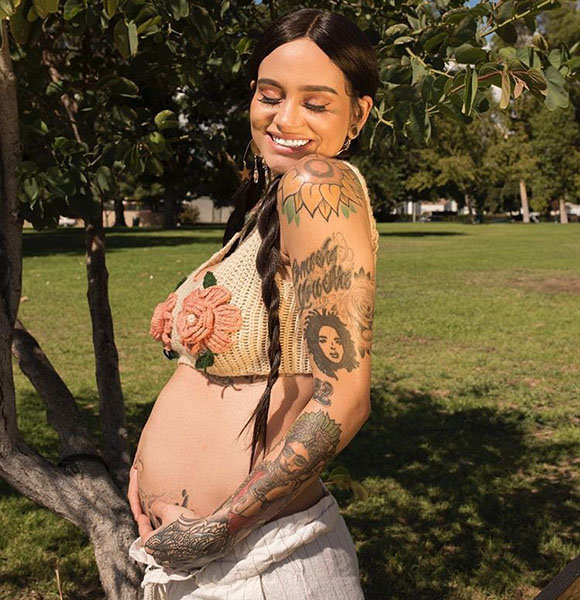 Kehlani Ashley Parrish has finally said hello to her longtime dream of cherishing the motherhood after welcoming her first baby.

The American songstress, who self-claimed to be queer, had welcomed pregnancy most adorable way possible. At the time, the soon-to-be mother kept her share of secrets by not popping out the baby daddy's name.

But, the fans were already going active with their assumption, and it got revealed that the speculated name is the real-baby dady!

Kehlani officially became a mom for the first time at the age of 23.

On 25th March 2019, the Honey hitmaker announced via Instagram that she and her boyfriend Javie Young-White had welcomed their first child - a baby daughter named Adeya.

Refraining from posting the details as well as the picture of the baby's view, she revealed that the experience was a homebirth. Her baby daddy Javie in subsequent social media posts told that she gave birth to Adeya standing up in their bathroom.

Kehlani industry pals Zendaya and SZA were the first ones to congratulate the new parents.

The joyous news came three months after she revealed the struggles of then-impending childbirth. Back in December 2018, the R&B singer opened about her experiencing prenatal depression.

Kehlani sure is a loving mother, but she is not in love with her baby daddy. She is, in fact, dating another man.

On 6 September 2019, Kehlani grabbed all the limelight when she appeared in the New York Fashion Week hand in hand with rapper YG. The glowing love between the couple was prominent in the event, and they also officially announced being in a relationship. Later that night, the lovers enjoyed a lovely dinner and posted a cozy picture on Kehlani's Instagram as well.

Both YG and Kehlani are now together, but they didn't intend to break their previous love. They are familiar to parenthood as well, as both have children of their own. As of now, they are enjoying each other's company, and it is interesting to see where the loving couple will reach.

The Gangsta singer, who dreamt of having a big lovely family since very young, announced on 12 October 2018 that she is expecting her first child. The story of soon to be experiencing the motherhood is similar to Cody Nickson's fiancee Jessica Graf.

The songstress shouted about the happiest news via Instagram by posting a picture of herself holding her baby bump while standing in the sunshine. The 24 aged beauty-brunette did not identify the father of her child at the time, but she indeed quoted him as the fantastic partner.

While she got raised by her aunt - mother was a drug addict while father died after her birth - she promised to be the great parents to her child.

Along with sharing the picture, she declared that having a " big healthy happy family" has been a young-aged dream stating, "this was the hardest thing to hide." Kehlani, who stands at the height of 1.63m, further added:-

"i am so honored to be given this gift by spirit, creator, and an amazing partner whom i trust with my body and life. i knew sharing something so personal and precious could bring stress into my world but there isn’t a word anyone would say my way that could take away from this."

The 23-year-old singer-songwriter then gushed that she was four months pregnant with the baby girl and already counting the days for her little angel's arrival. She wrote:-

"dearest little girl, i am so proud to be your mommy. i am so proud to have received you. i cannot wait to meet you, i know you will be 50,000 times more special than i can even imagine at this moment."

The "Ring" hitmaker opened more about her pregnancy during the interview with Nicki Minaj's show, Queen Radio in October 2018. Kehlani revealed:-

"It was planned so we had a short timeframe of having to actually have sex every day. And we were excited that it didn't start feeling like a chore."

Well, since she did not drop the name of her baby dady, numerous questions were aroused about her partner. That said, she did hint the identity of her baby dady and claimed that he had been rocking her Instagram for long.

Since she surprised fans with her pregnancy news, her fans started making their guess about her unborn child's father. After she revealed her baby bump, she shared a selfie on her Instagram Story quoting she has not hidden the baby dady; in fact, he has been in front of everyone's face.

And even during an interview with Nicki Minaj on Queen Radio, she explained the distinct features about her man.

When Nicki asked Kehlani about her romantic relationship with a woman or boyfriends, she explained that she was sharing a romance with the "bisexual man," who understands her queerness and fluidity.

Well, with describing the distinct nature of her partner, her fans already made their assumption as Javie Young-White to be her baby daddy.

Although the "In My Feelings" singer did not drop the name at the time, Javie had been ruling Kehlani's Instagram feed for a long time. On 9 October 2018, she Instagrammed the picture with Javie captioning, beans with the emoji of love.

The assumption on Javie being the baby daddy became more credible after Javie tweeted cherishing his fatherhood.

Since her post concluded that Javie was her baby daddy, it seemed that she didn't need more time to confirm the on-going speculation.