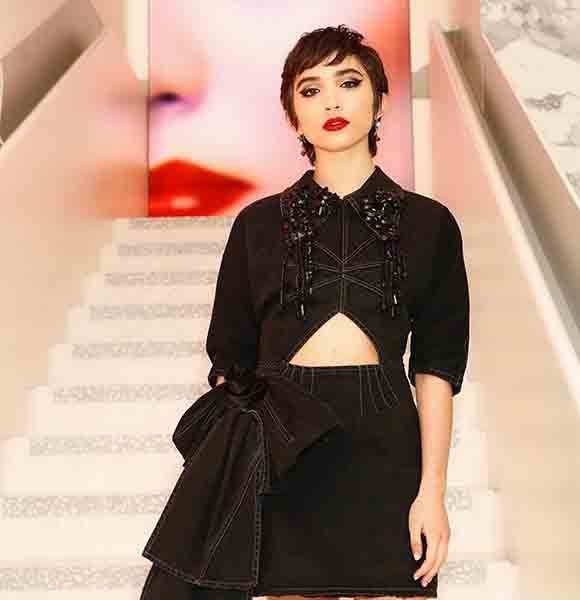 Only a few child actors have been able to take their fame into adulthood, one of them is American actress, Rowan Blanchard. Started acting at age five, Rowan is a talent to be recognized.

She rose to fame with the Disney spinoff of Boy Meets World, titled Girl Meets World. After the show’s abrupt end, she managed to bag a recurring role in the ABC period sitcom, The Goldberg as Jackie Geary.

Rowan has also lent her acting talent to the big screen; she portrayed Veronica Kiley in A Wrinkle in Time and as Jessica in A World Away in 2019.

Is Rowan Lesbian? Has Boyfriend Or Girlfriend?

Ever since she starred in the hit Disney series, Girl Meets World, Rowan has been the subject of many things. But, perhaps the one that stands out the most is her personal life.

In the past, the actress had been rumored to be dating her co-star, Peyton Meyer. However, in 2018, Peyton cleared up the tension between the fans, letting them know that he was just good friends with her.

Similarly, Rowan also got linked with another co-star, Uriah Shelton. What's more interesting is that in 2016 Rowan came out as queer. She, then made it clear that she had only dated boys in the past. And, would not like anyone to define her sexuality precisely as straight or gay.

After Girl Meets World, the actress has not been linked with anyone, so it is not clear what her relationship status is at the moment. She could be in a dating relationship with a boyfriend (or girlfriend) or perhaps enjoying the single life.

The actress was born as Rowan Eleanor Blanchard on the 14th of October 2001. She grew in the center of showbiz in Los Angeles, California, the USA. However, she likes to call herself a New Yorker because of her father’s roots there.

Rowan is the oldest of three children to her parents, Mark Blanchard-Boulbol and Elizabeth. Her two siblings are a brother and a sister named Shane Blanchard and Carmen Blanchard.

While on the subject of her family, Rowan comes from a diverse background.

She possesses mixed ethnicity as her paternal grandfather had Moroccan, Lebanese, Armenian, and Syrian ancestry. Also, her mother has one-fourth Portuguese, as well as German and English descent.