By LRU Writer | On: March 15, 2020
Rudy Gobert turned his primary goal in life to become an NBA player into a reality by becoming drafted in the...star center is always seen training in the basketball court or hitting the gym to keep...the big center joined a local hometown club, JSC Saint-Quentin and started training with... 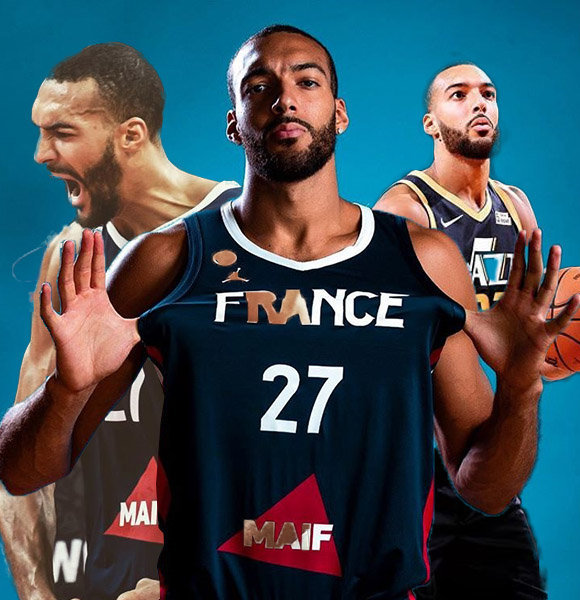 Chasing his father’s dream to play in the NBA, Rudy Gobert turned his primary goal in life to become an NBA player into a reality by getting drafted in the 2013 NBA season.

Not only did he make it into the big competition, but he also cemented his place as the leading shot blocker and defensive player in the tournament.

Now, he is the best in the business coming up from the title of the NBA Defensive Player of the Year in the 2018-19 season.

Rudy Gobert enjoys a very successful NBA career and opts to keep it that way by putting his full focus in the game.

The star center is always seen training in the basketball court or hitting the gym to keep himself fit. He is so much into the game that he is possibly not even dating a girlfriend, let alone get married to somebody.

However, the big man is in his career-high, so the fans might have to wait just a little more to see him find the right partner for himself.

Rudy Gobert was born to parents Connie Gobert and Rudy Bourgarel in Saint-Quentin, France, on 26 June 1992. His father was a former France national team player and played NCAA Tournaments with the Marist College in the 80s.

Growing up, the Utah Jazz player was very much inspired by his father to pursue a career in basketball. Soon, the big center joined a local hometown club, JSC Saint-Quentin, and started training with them.

Later in 2010, he debuted in the French League playing for the Cholet Basket and kicked off his professional career. However, his father did not want him to play in France but play against the very best in the biggest stage, the NBA. Clinging on to the same thought in his mind, the All-star center backed himself with one impressive performance after another. Finally, in the first round of the NBA Draft in 2013, he was picked by the Denver Nuggets but made his debut with the Utah Jazz.

Since his debut, he has gone onto play 422 games for the Jazz in his seventh season running with them and has managed a career-high average of 7.4 defensive rebounds and 2.2 blocks per game.

But, as of late, he is suffering from a left ankle sprain, which is keeping him in and out of the game.

On the 12th of March, Rudy was tested positive for Coronavirus. His positive testing resulted in the postponement of the game between Oklahoma City Thunder and Utah Jazz.

The player was initially careless about getting the disease and behaved recklessly during a press conference and in the Jazz locker room. Subsequently, his teammate, Donovan Mitchell, was tested positive as well.

Since the incident, Rudy has taken to his Instagram to publicly apologize for his behavior. Through an Instagram post on the 13th of March 2020, he also said that he would do whatever he could to raise awareness and support people in the subject of the spread of this virus.

Rudy thanked for the support that he was receiving for his condition and also revealed that he was under "great care" and will recover in full.