By LRU Writer | On: March 11, 2020
Russell Brand is a British comedian, author, actor, and philosophical thinker...is married to Laura Gallacher, now Laura Brand...has two children with laura; daughters Mabel and Peggy...was previously married to Katy Perry in 2010...their marriage ended in 2012...then he dated Jemima Khan for a year from 2013 to 2014... 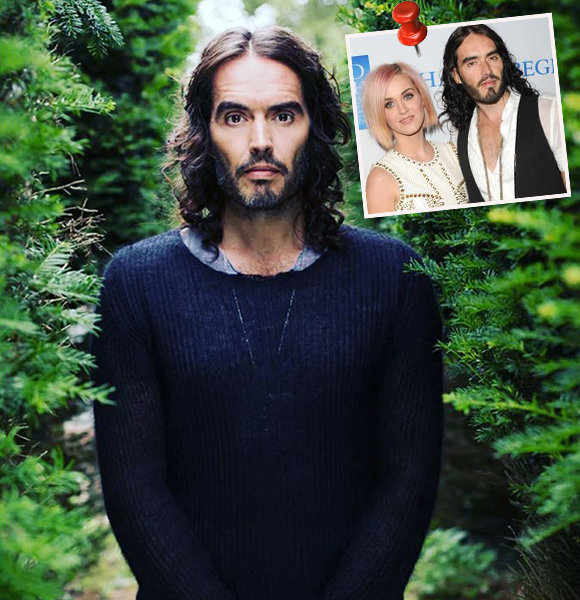 Russell Brand is a big name in the scene of comedy and intellectual discussions. The British personality is a comedian, author, TV presenter, radio host, and podcast host.

Russell has worked with various production companies such as MTV, BBC Radio, E4 Network, and so on for his radio shows, stand up routines, and award-show hosting jobs.

Russell is married to Laura Brand (formerly Laura Gallacher). They first dated on and off in 2007. However, they didn’t get into a serious relationship at the time.

Then, in 2015, they got back together for good. After a year of dating, Russell proposed to Laura in July of 2016. Following an engagement that lasted about a year, the couple got married on the 26th of August 2017. Their wedding ceremony was an Indian-themed occasion held close to the couple’s home in Henley-on-Thames, Oxford, the United Kingdom.

Russell has two kids with Laura. His first child, daughter Mabel, was born in November of 2016. And after approximately two years of Mabel’s birth, she was followed by her sister, Peggy, who was born in July of 2018.

Russell was famously in a relationship with pop superstar Katy Perry. They first met in 2009 on the set of Get Him to the Greek (2010). They got engaged shortly after.

A wedding followed their engagement, which was held on the 23rd of October 2010. They chose to have a traditional Hindu wedding ceremony in Rajasthan, India.

However, their marriage fell apart within two years of their wedding. Russell filed for divorce on the 30th of December 2011, citing “irreconcilable differences” as the reason. The divorce was legally finalized on the 16th of July 2012.

Guy Katy Was Linked With:- Diplo Dating Status Now, Girlfriend, Son, Who is His Baby Mama?

After his split with Katy was confirmed, Russell dated British film producer Jemima Khan. They went out from 2013 to 2014.

Russell was born on the 4th of June 1975 in Grays, Essex, England, the United Kingdom. His parents are Barbara Elizabeth Brand (Nichols) and Ronald Henry Brand.

His parents separated when he was six months old, and he was raised by his mother. His mother had to live with their relatives and undergo cancer treatment. His father only visited him rarely.

Enduring a difficult childhood, Russell left home aged 16 and attended various colleges and institutes. He fell into addiction, got expelled from colleges, and started a journey in comedy and acting.