By LRU Writer | On: April 29, 2019
Sabrina Dhowre's Bio: All You Need to Know about Idris Elba's wife.The romantic proposal where the Luther actor Idris Elba got down on one knee to propose his girlfriend Sabrina Dhowre went viral on the internet. Well, this proposal of the actor might have broken the hearts of many of his female fans. 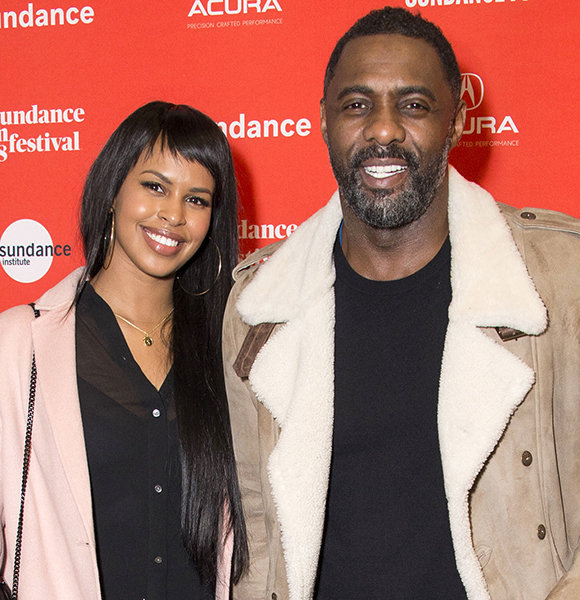 The romantic proposal, where the Luther actor Idris Elba got down on one knee to propose his girlfriend Sabrina Dhowre, went viral on the internet. Well, this proposal of the actor broke the hearts of many of his female fans.

If you're wondering about the girl, who has won the heart of this 46-year-old actor, then we present you not only the name, but everything there is about his partner as well!

Relationship Of Sabrina Dhowre And Idris

29-year-old Sabrina Dhowre, who was crowned Miss Vancouver in 2014, met her partner Idris while filming the 2017 thriller The Mountain Between Us. The pair eventually fell in love and remained in a dating relationship for less than a year.

In September 2017, Idris talked about his girlfriend, Sabrina in an interview with PEOPLE. Talking to the magazine, Idris said,

The couple made their first public impression at the Toronto International Film Festival in September 2017, five months prior to their engagement. Shortly after being engaged, the Somali model, Dhowre uploaded a picture with her man on Instagram on 12 February 2018 and gushed over her new fiancee with the caption that read:

“Baby! I can’t tell you enough how happy you make me and how lucky I feel to have found a love like this, you make my heart feel so full. I love you. Forever will always feel too short.”

Idris, who faced two failed marriages, previously revealed that he would not get in the marital bond anymore. And in that case, the proposal might have come as surprising news to some of the people out there. Idris then claimed,

He had continued as,

“Marriage is an institution of sorts. And I've done it. It's not for everybody. It's not my life's calling.”

Well, their wedding bell may come as a surprise, but it's not new to the actor, Idris Elba, who enjoys the net worth of $20 million. The Thor: Ragnarok actor was married to makeup artist Hanne Norgaard back in 1999, with whom he shares a 17-year-old daughter, Isan.

Later in 2006, he tied the knot with the lawyer Sonya Nicole Hamlin and split just four months after their marriage. Additionally, he was in a dating relationship with Naiyana Garth, a makeup artist, with whom he even shares a son, Winston (born 2014).

Though Idris ended the marital relationship with Sonya within a very short time, Sonya doesn't have any hard feeling for him. In 2016, she cited that she would be happy if Idris would get married again and start a family with his new wife. She explained,

'I'd be happy for him if he got married again, and he genuinely loved that person. I'm not a jealous person. I want him to be happy, just like I'm sure he wants me to be happy. I don't think he's ever going to have a problem being lonely.'

Interstingly, enough her wishes came true as 46-year-old Idris married his girlfriend despite the age gap of 16 years.

As the old saying goes, third times the charm. It just might be true for “American Gangster” actor Idris Elba. Named "Sexiest Man Alive" in 2018 by People's, Idris broke a lot of female fans heart as he officiated his marriage with his longtime girlfriend.

The couple’s first public appearance was at the Toronto International Film Festival premiere for Molly's Game in September 2017. Ever since then, the couple has been caught making rounds on many events. Sabrina Dhowre and Idris Alba hug each other on their wedding day (Photo: British Vogue On Instagram)

The duo married at the Ksar Char-Bagh hotel in Marrakesh, Morocco. The couple went out big and celebrated the union for three days.

Sabrina wore a beautiful off-the-shoulder, A-line gown custom-made by Vera Wang Gang for the wedding while her groom wore a classy custom suit made by designer, Ozwald Boateng.