By LRU Writer | On: November 07, 2019
TV shows have also been playing the part in her romantic life for the skilled presenter went to the E4 show, Celebs Go Dating to find the love of her love. However, her real life was out from the reach of reality shows, which, in fact, turned out to be a perfect relationship. 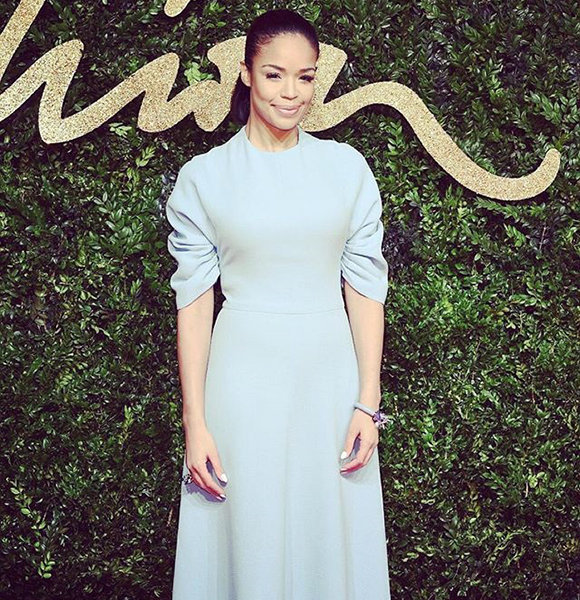 If hosting is the game, English television and radio presenter, Sarah-Jane Crawford is all about it.

While she was committed to her TV job, she also suffered from high-cancer risk.

And TV shows have also been playing a part in her romantic life for the skilled presenter went to the E4 show, Celebs Go Dating to find the love of her love. However, her real-life was out from the reach of reality shows, which turned out to be a perfect relationship.

After many challenges and winning the battle for a new life, Sarah-Jane finally found the shoulder to lean on in 2018.

The TV presenter is dating the professional boxer Joe Joyce since 2018. The couple preferred to maintain their relationship away from the limelight. However, their social media activities indeed hinted at many romantic sides shared between them.

Sarah shared the first glimpse of their relationship back in February 2018 after she took her new beau to Instagram.

Well, not just Sarah, her sportsman boyfriend is also eager to flaunt their dating life. Her Commonwealth heavyweight titleholder boyfriend immediately gushed about winning the title with the family, where Joe regards Sarah as his family, writing:

"Great to win the commonwealth title with the fam! â¤ï¸ #commonwealthtitle #family #andthenew"

Similarly, the couple is also seen enjoying their holiday together and are spotted going on a long ride. They were located in Ibiza where the new lovebird was soaking in the sun on 1 July 2018.

The boxer, who won Team GB a silver medal at the Rio Olympics in 2016, pulled Sarah-Jane in for a smooch, with his hands around her waist. Similarly, she seemed to not care about the public and went on to share a romantic kiss wrapping her boyfriend on her arms.

However, things are not as planned for the loving couple. Their relationship has been going through a dark patch for some time now. Both of them have not revealed what is going on in their relationship. Also, Sarah was seen posting pictures with a new man who she calls her boyfriend.

While their relationship has been under the radar for quite some time, Sarah shocked everyone when she took to her Instagram to post a picture with a new man in June 2019. With the post, the host sent shock waves to her fans and family. Sarah-Jane with her new partner in July 2019 (Photo: Sarah-Jane's Instagram)

Like the aftereffect of an earthquake, she followed up the first picture with yet another Instagram post where she cleared all the doubts mentioning the man as her boyfriend. Though the couple has not mentioned parting way with each other, by the looks of it they might have moved on.

The 36-year TV presenter was previously dating Ross Harland. The former couple was also spotted celebrating Sarah's 29th Birthday in July 2014 at Steak London. On the occasion of her birthday, her ex-boyfriend has tweeted:

"Thank you so much @STKLondon for making @DJSarahJane 's birthday one to remember!!!!"

Well, after the split, the DJ appeared on E4 show Celebs Go Dating alongside many celebrities in 2017 in a quest to find love. But she finally found her man without the help of reality TV.

Firstly, she discovered a lump in her right breast and consulted her General practitioner, who referred her for a scan and needle biopsy. And she was recommended to remove the piece sooner or later as she was on a high risk of breast cancer. So, on the one side, her health was worsening, and on the other hand, her high-profile job would slip away from her.

She removed a lump from her right breast in 2014, and after the operation, she started to work as a presenter on The Xtra Factor. Well, the bad omen was not over for her, as she returned to her hectic schedule, she felt a painful lump on her stomach. She recalled:

“When I pressed on my stomach, I felt a painful lump. Investigations showed that I had a massive uterine fibroid. It was the equivalent in size to being three months pregnant.”

Well, after finding a massive uterine fibroid, she had a non-cancerous fibroid removed from her uterus. Fibroids are more common in Afro-Caribbean origin's women such as Sarah-Jane. However, she claims that no one in her family and her parents had been through breast cancer or fibroids.

Moreover, after removing a lump from the right breast, she found another on the left in 2016. She suffered from a second cancer alert in two years. After seeing another piece, she wanted an operation to remove the section. But it would be her third operation in two years following her surgery of lump and removal of a non-cancerous fibroid.

And she was terrified of having another surgery as the previous surgery left her so unwell that she suffered double vision for weeks, making her difficult to cross the road alone. She added:

“I was walking around with really bad double vision. I couldn’t even walk across the road by myself. But thankfully it was caused by the operation rather than anything more serious and I was told by doctors it was probably a once in a lifetime thing.”

Well, as of now, she has adopted a healthy lifestyle by overhauling her diet and is continuing to do her job well. She balances her work life between London and LA and spends her free time with family. She timely wishes on the birthday of her brother, mother, and friends and does not fall behind to express her feeling with fans.

As of 2019, she enjoys a massive net worth of $4 million and is one of the top TV stars of the industry.