By LRU Writer | On: October 15, 2019
Named one of the beautiful people in Gladys magazine's 2015 list, Sarah Jones is one bonafide actress...Starting her acting journey...Sarah has dated a few famous people in her dating life. In 2007, she was in a relationship with a singer...Sarah of age 36 boasts a career over one decade in Hollywood. No wonder, her... 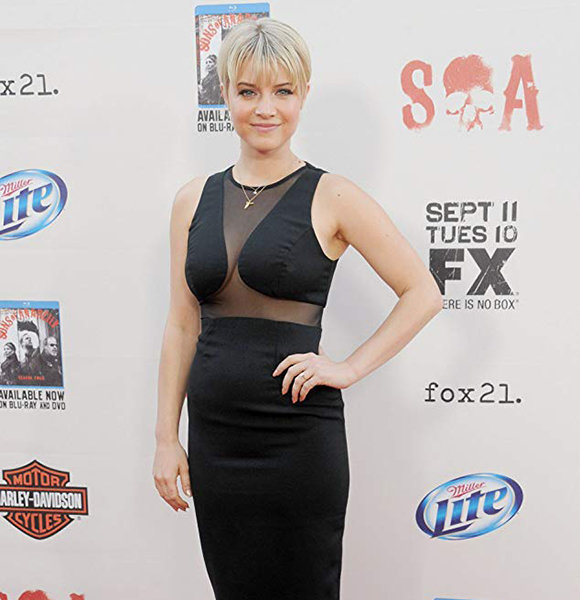 Named one of the beautiful people in Gladys magazine's 2015 list, Sarah Jones is one bonafide actress.

Starting her acting journey in 2004 with the TV show, Medical Investigation, Sarah has enjoyed an active career, to date. As of 2019, her projects, TV show For All Mankind and movie, Chemical Hearts is in post-production.

Sarah has dated a few famous people in her dating life. In 2007, she was in a relationship with singer Cary Brothers. The pair were deeply in love and worked as a unit, even in the professional setting.

Well, the actress famously made a cameo in her boyfriend’s music video titled Who You Are. However, the pair’s relationship didn’t last as they parted ways.

Neither Sarah nor her ex-boyfriend chose to announce their split. Thus, only when the actress started dating her Sons of Anarchy co-star, Theo Rossi, in 2010, the demise of her previous relationship became public.

Moving on from her past affair, Sarah enjoyed a public romance with her new boyfriend. The couple often attended events together where they flaunted their love. On 8 September 2012, they seemed rather close at the red carpet of their show Sons Of Anarchy’s season five screening. Sadly the relationship also ended in heartbreak. Theo went on to marry Meghan McDermott in 2015, and the married couple even welcomed a son named Kane.

Sons Of Anarchy Star:- Is Mark Boone Junior Secretly Married? Has A Wife Or Single And Earning?

Maybe she is too focused on her career than to find a husband and built a family with him.

Like her dating life in recent years, Sarah has kept information about her immediate family, a secret. However, in reel life, she did portray a daughter as a character named Polly Zobelle in Sons Of Anarchy. Adam Arkin essayed her on-screen father's role Ethan Zobelle.

Sarah of age 36 boasts a career over one decade in Hollywood. No wonder her filmography consists of over 25 acting credits to date.

For the latter, she won the 2007 Spirit of the Independent Award in the Best Ensemble category. She shared the award with her co-stars, Ryan Kelley and Douglas Spain, to name a few.

As a reputed actress, she earns $49,923 per year, which adds to her growing net worth. With new projects in productions, Sarah will undoubtedly take a considerable paycheck home.