By LRU Writer | On: August 19, 2019
Scott Grimes engaged man for the - wait for it - the third time! The Lowell Massachusetts-native, age...got engaged to his co-star girlfriend, seven months after going public...Dating - or married life, for that matter - so far has been the kindest ally to Scott, who's divorced twice. Perhaps, the third time could prove as the charm for the American Dad voice actor...Read along to learn more about his most recent engagement as well as net worth from tv shows & movies... 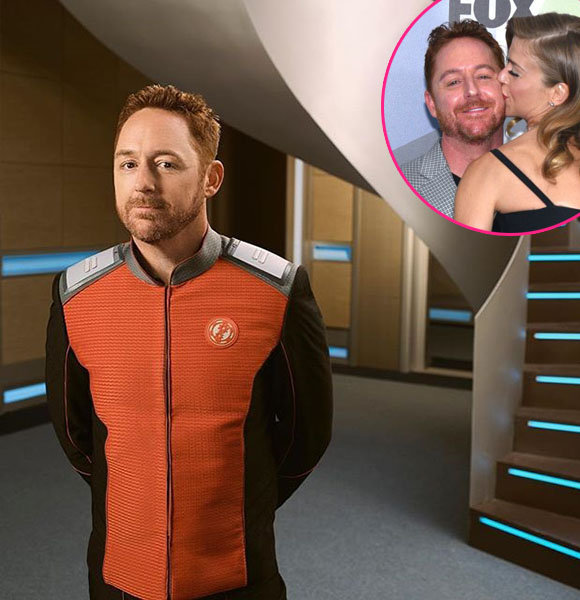 Scott Grimes is an American actor known for his work in TV shows namely Nothing Is Easy and Goode Behavior. Besides acting on-screen, he has also worked as a voice-over artist in American Dad!

Further, he voiced the character of Kevin Swanson in Family Guy from 2011 to 2015.

Gets Engaged To Co-Star Girlfriend; Dating Since July 2018?

Scott was officially off the market after his girlfriend & The Orville co-star, Adrianne Palicki took to Twitter to announce their engagement.

Tweeting a snap of the two in each other's arm all the while flaunting a new ring, his girlfriend-cum-fiancee Adrianne shared the news on 18th January 2019 with her 192 thousand followers by writing:-

"So happy to spend my life with you @ScottGrimes..." To his fans' surprise, his wife-to-be Adrienne tagged the post with the hashtag "I do," which subsequently spawned rumors suggesting that the pair might have married in a private wedding ceremony.

Discover:- "Potter" Movies David Thewlis Net Worth Revealed! Is He Gay Or Married?

The news of Scott committing to his The Orville co-star came seven months after the pair went public with their relationship. In July 2018, they stepped out holding each other's hand at a red carpet event during the San Diego Comic-Con 2018. Scott Grimes walks out hand in hand with Adrianne Palicki for the first time during 2018 San Diego Comic-Con (Photo: dailymail.co.uk)

According to industry insiders, the smitten couple - who began working alongside each other in the Seth MacFarlane's science fiction comedy-drama since 2016 - could have been dating since late 2017.

Scott got married to his girlfriend, Adrianne Palicki on 19 May 2019. The pair’s wedding ceremony was an intimate affair amidst friends and family at Austin, Texas. However, the actor duo’s marriage didn’t last.

Adrianne field for the divorce just two months after the pair tied the knot. The Orville actors have not commented on the reason behind their divorce. And, the legal proceedings are still going on, thus the divorce is not finalized just yet.

This will be the third time marriage didn’t work for Scott, while it is Adrianne’s first failed marriage. In their short matrimony, the actor duo didn’t bore any children. However, the actress was stepmother to Scott’s two children.

Between 1997 to 2007, the Critters actor enjoyed a decade long marital relationship with Dawn Bailey, with whom he shares two children. And, four years after divorcing his first wife, he married makeup artist, Megan Moore.

Sadly, the 48-year-old's second marriage saw the same fate as his first as he and Megan parted ways in November 2017. Following the divorce settlement, Scott's $5 million net worth took a massive hit.

Like him, his wife-to-be is no stranger to breaking up either. Adrianne called off her engagement to her stuntman fiance, Jackson Spidell, who she got introduced to on the set of the movie John Wick (2014).