By LRU Writer | On: December 06, 2019
American television personality Sean Lowe had his first brush with fame as...introduced him as the lead in...met his wife Catherine Giudici in...welcomed their first child in...their second boy...as the couple is looking forward to their sixth wedding anniversary...going stronger than ever... initially started his career as a football player...made an appearance in many other reality shows...enjoys an estimated net worth of... 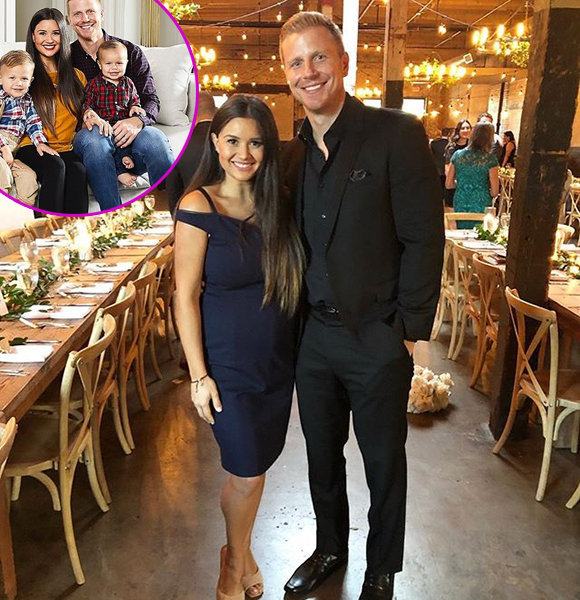 American television personality Sean Lowe had his first brush with fame as a contestant on the 8th season of The Bachelorette in 2012. Unfortunately, he was eliminated from the show in the ninth week.

However, Sean's eventual popularity forced the creators to introduce him as the lead in the 17th season of The Bachelor in 2013. And, this time, he found 'the one' from the reality show.

Read on for more details on Sean Lowe's personal life (the one) and professional life.

Sean Lowe met his wife Catherine Giudici in the reality show The Bachelor in 2013. Catherine was among the 26 girls - who were on the quest to be Mrs. Lowe - and Sean eventually ended up falling for her.

The couple tied the knot on 26 January 2014 at the Four Seasons Resort The Biltmore Santa Barbara. The whole ceremony was also aired live on ABC. After two years of marriage, the couple welcomed their first child in 2016, a baby boy named Samuel Lowe. Further, their happiness doubled in 2018, as they welcomed their second boy Isaiah Hendrix in 2018.

Now, as the couple is looking forward to their sixth wedding anniversary, they are preparing to welcome their third child at the end of December 2019.

The Man Behind The Bachelor Franchise:- Mike Fleiss Wife, Divorce, Children, Net Worth

Although he got eliminated from the show, he gained a massive fan following - which earned him the role of the lead on The Bachelor in 2013.

Following his fame from The Bachelors, Sean has made an appearance in many other reality shows like Dancing with the Stars (2013), Celebrity Wife Swap (2015), Marriage Boot Camp: Reality Stars 4, and Who Wants to Be a Millionaire (2015).

From his impressive career as a reality TV personality, Sean enjoys an estimated net worth of $500 thousand. As of now, Sean is involved in various jobs ranging from the insurance business to real estate investments.

Sean was born as Sean Thomas Lowe on 16th November 1983 in  Arlington, Texas.

His parents Sherry and Jay Lowe are devout Christians - who raised Sean and his older sister, Shay, in a very religious upbringing.

Sean is a true animal lover and has two pet dogs named Lola and Ellie.