Stacey Solomon Spills Wedding Plans & Husband-To-Be Joe Swash Is Out Of It!

By LRU Writer | On: June 11, 2021
Stacey Solomon is the British singer. She is the third winner of the six season of The X Factor(UK)...She has his eldest son with boyfriend...She has another son with...She met her current boyfriend in the show...She is planning her wedding on her own. 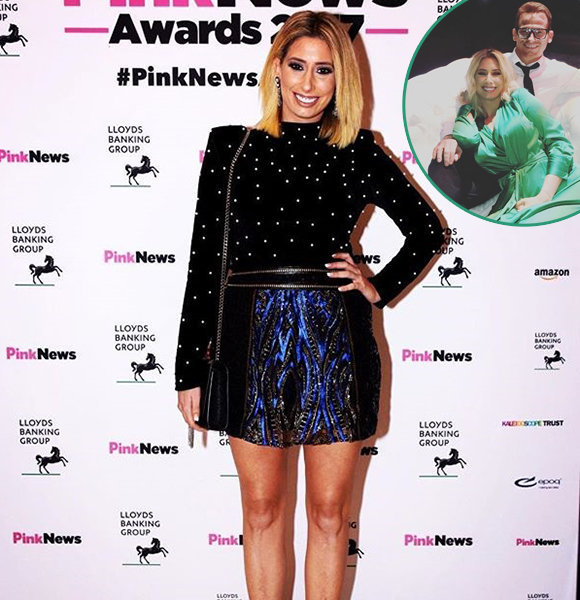 British singer Stacey Solomon got her lifetime recognition with her third position on the sixth season of The X Factor (UK). Also, she got her solo success with the 2011 songs like Driving Home for Christmas.

Jumping to the reality star, the single mom found her husband-like figure in the host of the show; I'm A Celebrity. She is more eager to accept the marriage proposal, and as well her boyfriend is waiting for the right time to deliver the proposal.

The impatient Stacey also spilled the fairytale themed wedding plans with her boyfriend and wants to manage the ceremony on her own.

Mother At Age of 19; Takes Son To Police Station

Born on 4 October 1989 in England, at the young age of 19, Stacey stepped into the beautiful life of motherhood with her then-boyfriend Dean Cox. She welcomed a son named Zachary on 21 March 2008 with her parents David and Fiona Solomon by her side.

With the arrival of her first child, she split with her boyfriend anonymously in 2009. After breaking up from her baby's father, again she conceived her second child with painter-boyfriend Aaron Barham after having two years of dating life with him.

When she was four months pregnant with Aaron's child, he proposed her during a horse and carriage ride in NewYork on 4 December 2011. The happily engaged couple welcomed their first child, a son named Leighton Riley Barham on 5 May 2012.

However, the parents of Leighton ended their relationship before walking the altar.

After she ended her relationship with her fiance, Stacey was romantically linked with the actor Steve O after the couple met each other on Channel 4's winter sports challenge program, The Jump in February 2015. They had a strong relationship like a real whirlwind for the time being, but his States tour broke their intimate relationship. But, the couple called off their relationship after six months of dating in September 2015. The couple cited the inability to maintain a long-distance relationship as the main reason for the split.

With ending the relationship with Jackass favorite Steve, the Loose Women panelist, who took her eldest son 10-year-old Zachary to police station due to his misbehavior to show him cells, revealed that she was just attracted to him.

The 2009's X Factor contestant not only took her son to the police station but also homeschooled her two boys since September 2017. Many negative comments were made on her after she disclosed that she is taking them out of mainstream education.

She disclosed that people commented on how dumb she was and how silly her children would turn out. But she claimed that her children are responding very well.

"At the moment they are responding to it really well and they are learning a lot more in a much more positive way."

Well, she also cleared that she was never a dumb student as she has never failed any exams during her school level. Also, she satired to the negative commentators stating it's the parent's decision to do what they think is best for their child.

Waiting For Wedding Proposal; Planned the Fairytale Like Wedding

After having the short-term relationship with multiple partners, Scarlet seems to have found the husband like figure in the Joe Swash who has a son with his former partner.

She first met her English presenter boyfriend, Joe Swash in 2015 when Joe was busy presenting the I'm A Celebrity spin-off, and Stacey was a guest on the show. The pair started dating after the 36-year-old Joe asked Stacey to be his girlfriend after returning to the UK.

Related to "I'm A Celebrity":- All About Jack Maynard: His Age, Birthday, Dating Affair with Girlfriend, Net Worth and Much More

Firstly, she never wanted to see him again, but persistent Joe won the dating game.

Even after two years of dating life, Stacey and Joe lines on their own house, unlike other couples who move in together. But the idea of moving in together never striked them.

With their long relationship, the couple was also rumored to have engaged. Speculation about the pair's engagement aired after Stacey showed off her manicure on Instagram in April 2017, also flashing her diamond ring on the ring finger. If Joe got on his knee to propose her, then it won't be his first time. The former EastEnders star previously proposed her in October 2016 after Host Keith Lemon handed him the box of a ring to propose her. Well, this proposal scene was just a part of the Celebrity Juice skit.

The former I’m a Celebrity… Get Me Out of Here! Winner, Stacey, who revealed that she was in no rush to have children with her boyfriend, also announced that she does not prefer the sex-full marriage.

Also, she had revealed on March 2018 that she got no plans of getting married to her rumored fiance a.k.a her boyfriend, is all ready to Mrs. Swash. She is only waiting for the marriage proposal; whereas, Joe is thinking of something big to propose his girlfriend.

In addition to waiting for the proposal, Stacey is fully hit up with the wedding plans on her own. Speaking on Loose Women, the panelist Stacey revealed that she has also already planned to get married to Joe and even hinted that the wedding bells to be heard very soon.

Stacey, who has a net worth of $900 thousand, wants her wedding to be in Disney fairytale-style, dreaming the birds to get her dressed. With her dream wedding ceremony, it seems her soon-to-be husband does not want to get involved at all.

Well, the single parent and the working mother, Stacey revealed that Joe comes in the bottom in the list as she has two sons to take care of. When she is not working she gives her time to her boys.

Also, she revealed that she only gets the quality time with Joe once a month when the boys go to their dads and when the kids go to bed. Stacey and her boyfriend seem to be the perfect family in an Instagram video shared by Stacey on 23 August 2018. In the video, the singer along with her children tried performing the circus skills as part of Group on UK's Summer Unfiltered campaign. Also, her boyfriend tried to show some circus skills.

Since they seem like the perfect family together, the 28-aged panelist disclosed that she caught her boyfriend Joe Swash watching adult movies on the set of the Loose Women. She also expressed her genuine concern about visiting the adult website. She thinks an individual view the adult video when they are not happy; it surely hints that Joe might not be pleased with her.

Stacey and Joe's romance of over three years has suddenly turned serious as the singer awaits her third child, first with her present boyfriend. While Stacey's pregnancy isn't a pleasant time for her as she's had some complications, she is excited to bring one more child to the world.

The English TV personality earlier announced her third pregnancy on 22 February 2019 sharing an ultrasound image of her upcoming baby.

The due date of the child is reportedly in July, but neither Stacey nor her boyfriend has come out to speak on the matter. Further, the couple has also not revealed the gender of their soon-to-be-arriving child. With Stacey and Joe becoming parents together, it may be time for both to think about creating a better future for their child and providing a healthy environment for the kid to grow.