By LRU Writer | On: January 13, 2019
Actress Steffiana de la Cruz has always had the conflict of identity. Although she has portrayed some terrific performances onscreen, her professional status as an artist somehow seems to be overshadowed by her comedian-actor husband...Often known as the wife of the I Now Pronounce You Chuck & Larry actor, Kevin James... 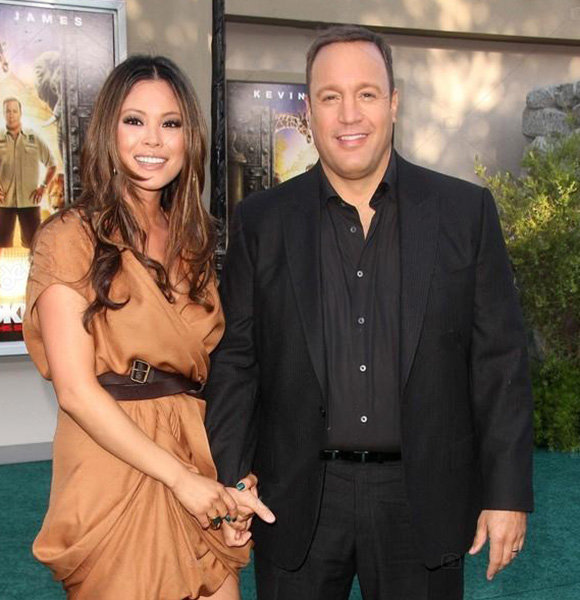 Actress Steffiana de la Cruz embraces her Asian looks so beautifully that her fans are eager to know her nationality and ethnicity that bestowed her such beauty. With ravishing looks by her side, she also holds a prosperous career.

But, her professional status as an artist somehow seems to be overshadowed by her comedian-actor husband. Nevertheless, being a real artist, she doesn't seek validation from others. She works with all her heart and offers more than just being a spouse of her famous husband.

So, here is her bio that gives an insight into her personal and professional life, including her origins and married life details!

Steffiana - born as the daughter of Filipino immigrant parents - became interested in modelling and acting at an early age. For good, her perfect height of 5 feet 7 inches (1.72 m) made her approach to the entertainment industry easier. So, with a green mark for her beauty, she succeeded in establishing herself as a model in her early twenties and started getting acting jobs.

In the earlier days, she used to be cast in stereotypical roles for her looks based on Asian ethnicity. Despite growing up in New York City and having an American nationality, she was appointed to do typical characters.

But, all thanks to her skills and hard work, Steffiana got able to amass more significant and challenging roles eventually. She appeared in several TV shows and movies like Zookeeper, Paul Blart: Mall Cop, King of Queens, Redemption, Die Gang, Something to Sing About, and so on.

And, through her mind-boggling works, she garnered not only fame but also applaudable net worth. She has an estimated net worth of $5 million.

Steffiana - who previously dated deceased actor Chris Penn - is married to her long-time husband, Kevin James, an American actor best known for his stints on Grown Ups. She first met Kevin on a blind date set up by his interior designer in late 2000.

Unbeknownst of the fact that the first meeting would turn up to be the most beautiful journey, the pair developed a liking for each other. And, soon with that, they started dating before finally getting engaged in 2003.

You May Also Like:- Desiree Hartsock Welcomes Baby No.2 With Husband, Shares First Photo

The couple waited for nearly a year before tying the wedding knots. Their wait finally ended on 19 June 2004 as Steffiana and Kevin got married via an intimate wedding ceremony held at the St. Edward Catholic Church in Dana Point, South California.

Several of the bride and groom's family members and close friends including comedian Ray Romano attended the wedding. While raising their children, the life partners are also doing well financially. Along with Steffiana's net worth, the couple also enjoys Kevin's net worth of $80 million through which it can be implied that money is indeed not an issue for the family.

Related To Kevin James:- Leslie Knipfing: Kevin James And Gary Valentine as Siblings, But Not in Limelight: False Identity in Tabloids

Also, fitness is no issue for the family. Both the partners know how to maintain a healthy body. That's why there is no surprise on learning that Steffiana weights only 121 lbs (55 kg) despite being a mother of four. Even at the age of 44, she has beautiful legs accompanied by perfect feet size to envy every woman.