By LRU Writer | On: March 03, 2021
Sydel Curry Wiki: The 23 Years Old Is Engaged-to-Get Married to Athlete Boyfriend The American former college volleyball player, Sydel Curry made headlines after getting engaged to a renowned basketball player, Damion Lee. The athlete couple is indeed relationship goals to many with their wedding on the line. Moreover, Sydel who also belongs to the family full of famous athletes is somebody you might want to know about more. 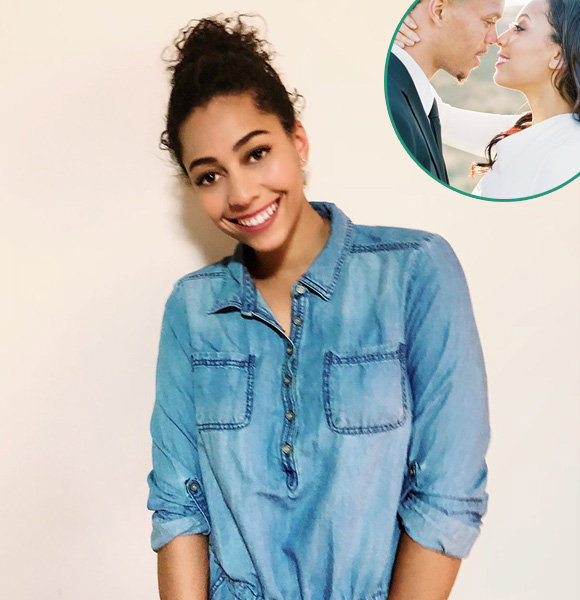 The American former college volleyball player, Sydel Curry made headlines after getting engaged to a renowned basketball player, Damion Lee. The athlete couple is indeed relationship goals to many as the couple recently tied the knots in a dream wedding.

Moreover, Sydel who also belongs to the family full of famous athletes is somebody you might want to know about more.

Well, we present you a wiki of Sydel, to help you get acquainted with this beautiful athlete in depth.

The daughter of former NBA player, Dell Curry, and fellow volleyball player, Sonya curry, Sydel was born on October 20, 1994, and is 23 years of age.

Discover:- Jacob Hoggard, Divorced With Wife of 4 Years, Amazes Us With Splendid Net Worth!

Sydel, who herself is an athlete, is a younger sister of Dallas Mavericks' basketball player, Seth Curry and NBA MVP Stephen Curry. Sydel alongside her brothers, Steph and Seth Curry snap for a photo (Photo:- Sydel Curry's Instagram)

Sydel started off being on the indoor volleyball team during her time at Elon University. She was a three-year captain and four-year starter for 'Charlotte Christian,' in her high school volleyball team in North Carolina. Furthermore, Sydel is a two-time NCISAA All-State selection (2011-12) and four-time CISAA All-Conference (2009-12).

Sydel even provides a glimpse of her passion for volleyball through Twitter at times. She once tweeted:

"But back to the volleyball grind! Offseason is always the hardest but produce the best results."

Athleticism seems to be the trait of her family!

Apart from her athletic background she also runs a fashion and lifestyle website called 'A curry Girl.' Further, she also assists her sister in law, Ayesha Curry in her International Smoke restaurant business.

Sydel, who retired from volleyball as a Division I athlete in 2017, graduated from Elon University in 2018. Since the graduation, she has secured a move to Tesla, working as the famed car manufacturer's service concierge.

Additionally, her family, being involved in sports was not enough; that now, she was engaged to Damion Lee, a famed basketball player. We wonder what their family gathering talks feature!

Well, jokes apart, Sydel is lucky to have found love in somebody who shares similar interest as her. Sydel got engaged to then boyfriend-turned-fiance, Damion on November 12 this year, and Sydel couldn't keep her excitement to herself, as she shared the picture with her fiance; flaunting her square-cut diamond ring. Sydel's sister in law and wife of Stephen, Ayesha Curry was present while Damion popped the question to Sydel as,

"Love is nothing to rush, I know you wouldn't hurry me. Would you like to be Mrs. Sydel Alicia Curry-Lee?"

Ayesha shared series of pictures from Sydel's engagement and expressed her happiness via Instagram, Moreover, though the dating timeline of Sydel and Damion's relationship is unclear, Sydel first gave the glimpse of Damion via Instagram in early 2017.

Less than a year after getting engaged to each other, the pair tied the nuptial on 1st September 2018.

However, it wasn't until two days later when Sydel put up an Instagram post that the public became aware of their marriage. 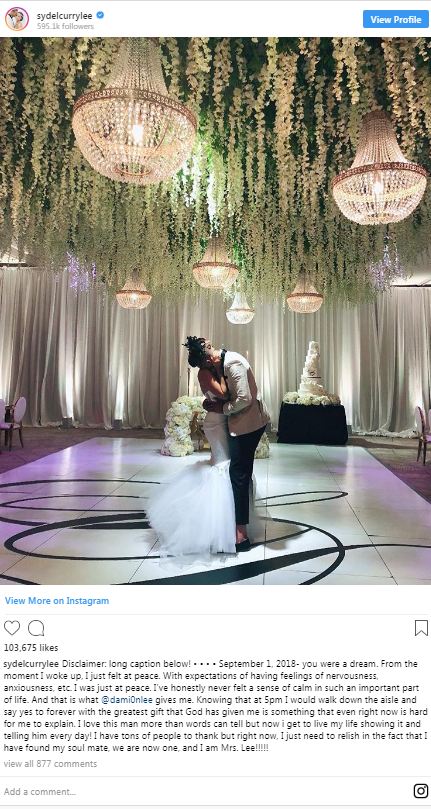 A month later, Sydel again took to her Instagram handle to share her thoughts on being married so far. The post which featured Sydel and her husband's kissing on their wedding day and a caption which read:

"Ahhh 1 month into marriage. He gets on my nerves but that just makes me love him more!"

In the guest lists, Curry family were also including amidst her brother Steph and sister-in-law Ayesha, who had provided her with the most adorable wedding gift.

Steph and Ayesha along with her class of 2017 at Elon University announced that the said University was honoring her by naming their women's volleyball locker room after her. The announcement brought Sydel to tears.