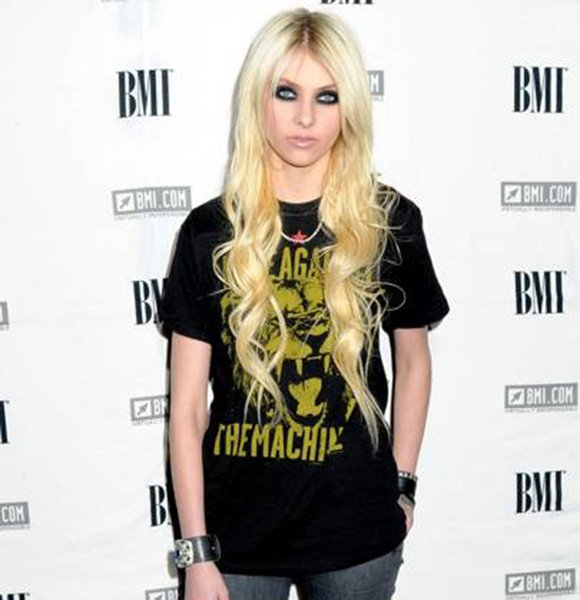 If you are an admirer of the American hit series- Gossip Girl; you must be familiar with Taylor Momsen, who portrayed the character of troublesome, Jenny Humphrey.

However, the Gossip Girl star, Taylor Momsen, has a fair share of romance in her life. So has she found her husband? Let’s find out.

Celebrities these days tend to be more private than ever, and Taylor has followed the same path. She tried her best to keep her personal and love life away from the eyes of the media.

Taylor has not been seen with any guy in recent years. So we can safely assume that she has not found her husband.

As of now, she has been quiet about dating and having a boyfriend. Maybe she is searching for a partner who can be her future husband. However, she has been in a relationship previously.

In 2008, Taylor was linked with the Narnia fame British actor Skandar Keynes. However, the actor duo never commented on their alleged relationship.

Further, in 2010, she was rumored to be dating British musician Natt Weller. Unfortunately, that relationship also was short-lived.

But, the actress didn't give up on love. The same year, Taylor was linked with another famous name- British TV personality Jack Osbourne.

Other than her dating rumors with guys, Taylor also ignited some lesbian rumors for herself in 2011 when she gave a steamy lap dance to a female fan. She has been in multiple relationships but has not found someone she can call her husband.

In a 2014 interview, Taylor opened up about wanting to get married, have a perfect husband, and start a family in the future. Further, she also mentioned that she was waiting for the "perfect person."

She could still be looking for her suitable husband, or she could have already found a perfect husband but kept him a secret.

Apart from starting her own family, she improves her relationship with her parents.

Taylor was born Taylor Michel Momsen on 26 July 1993 to parents Colette Momsen and Michael Momsen. She grew up in Missouri in a family of four, alongside her younger sister Sloane Momsen. Just like Taylor, Sloane is also a former child actor who has appeared in the TV show Law & Order: Special Victims Unit.

As of now, Taylor seems to share a good bonding with her parents. But that was not always the case; in her mid-teens, Taylor accused her parents of pushing her into work as a child and questioned their parenting. However, from her sweet posts on social media, Taylor seems to have buried the hatchet with her parents.

All seems to be well in her connection with her family.

Even though she has paused her acting career, she is doing great in her liking field.

Taylor had her first brush with fame at the mere age of two when Ford Models signed her. Then followed her first screen appearance for the commercial of Shake ‘n Bake as a three-year-old.

Starting her career at the age of three, Taylor, of height 5 feet 8 inches (1.73 m) and a weight of 55 kg, has established herself in the industry.

She has appeared in movies like How the Grinch Stole Christmas, Spy Kids 2: Island of Lost Dreams, and Underdog, to name a few.

Apart from acting, Taylor has also had a successful career in modeling. IMG models signed her at the age of 14. Since then, she has appeared in commercials and graced the covers of fashion magazines, namely Maxim, Seventeen, and Revolver.

Despite having a successful career in both acting and modeling, her true passion always lied in music. Following her passion, she became the lead singer of The Pretty Reckless in 2009.

During her career, she has gone through a lot of tragedies. She had to face a lot of death of her dear one, which made her crushed and hard to focus on her music.

The most heartbreaking news for her was losing her producer, her best friend. The death of her bestfriend caused her severe depression with substance abuse.

Regardless, she had to move on from the grief. She shared how music saved her.

Taylor is not a person who likes to be in controversies. However, she was once linked to Heidi Montag.

In an interview with Revolver magazine, Taylor shared that the song ‘Blackout’ was actually written by her when she was eight years old. This caused quite a stir and when asked Heidi, she said she liked it and chose it for her singles.

The song’s co-writer was Cathy Dennis, who showed the song to Heidi. Heidi loved the song, and her husband, Spencer Pratt, helped her direct the music video.

This incident cooled down after a while when the two cleared their misunderstandings.

Know More: Andrew Ilnyckyj Married at Last! Who Is the 'Worth It' Star's Wife?

After that, Taylor totally focused on her profession, and with such a successful career, the 28-year-old multi-talented personality has accumulated an estimated net worth of around $4 million.

Other than music, she is speaking up about mental health. In Mind Wide Open, an interview with Lily Cornell Silver, Taylor spoke about hope and courage to live life.

As of now, Taylor is putting her acting career on hold to pursue music as a songwriter as well as a singer. In fact, her recent studio album "Death by Rock and Roll" secured the number one position on the Billboard Charts.

We hope this amazing lady finds her perfect husband soon. Stay tuned with us for more updates on Taylor Momsen.