By LRU Writer | On: October 01, 2019
Tiera Skovbye is famous for...she was also scouted by a modeling agency...She is engaged to her longtime...planning a wedding...Her parents are...also has a younger...stands at a height of...has accumulated a decent amount ... 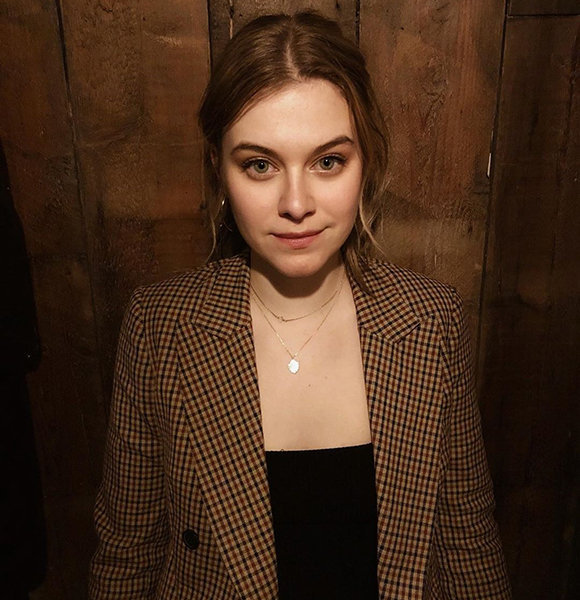 Imagine being a seven-year-old, playing at a children's festival, and getting the very first acting break. It's surreal!

But, that's what happened for Canadian actress Tiera Skovbye. When she was just seven years old, Tiera was spotted by an agent at the Children's Festival in Vancouver.

Then, she was cast in Warner Home Entertainment's children series, McKid's Adventures. Following her debut, she landed roles as a child actor in hit shows, namely-  Supernatural, Kaya, Wingin' It, The Haunting Hour and Spooksville.

Apart from acting, she was also scouted by a modeling agency at the mere age of 13, thanks to her natural beauty and growing fame.

Most recently, she is famous for her portrayal of Polly Cooper on CW's hit show Riverdale.

Tiera Skovbye was born Tiera Sophie Skovbye on 6 May 1995 in Vancouver, Canada. Her parents are Russ and Tina Skovbye. She boasts Scandinavian ancestry, and most of her distant family still reside in Sweden and Denmark.

Tiera also has a younger sister named- Ali Skovbye, who is also an actress. Ali has been on series like- Smallville, Supernatural, Fringe, and Falling Skies. Further, the sister duo appeared together in Forever 16 as on-screen siblings.

In the CW's hit series Riverdale, the story started with Polly( Tiera's character) losing Jason (played by Trevor Stines)- the love her life. However, in real life, Tiera is a lot luckier than her on-screen character. She is engaged to her longtime boyfriend, Jameson Parker. Tiera said 'yes' to the man of her dreams in August 2017, when he proposed her in his childhood bedroom. Before their engagement, the couple had been dating for more than two years.

Further, the pair took their relationship to a professional level when they collaborated on the film, Summer of 84- Jameson produced the movie and Tiera starred in it.

As of now, the couple has been engaged for more than two years. However, they do not seem to be anywhere near planning a wedding. There were rumors of the couple getting married in August 2019, but that did not happen.

Tiera and Jameson are probably taking more time for planning, or their busy life could be postponing their wedding. Since no confirmation has come from Tiera all one can do, is speculate.

Twenty-four years old Tiera, who stands at the height of 5 feet 9 inches (1.75 m), has been in the industry for a long time. Since the age of seven, Tiera has been a part of many projects like Midnight Sun, The Miracle Season.

Thus, she surely earns more than the annual average salary of an actress; $49,923 per year. So, it's safe to say that the gorgeous actress has accumulated decent net worth.

Likewise, the talented actress has also amassed a healthy wealth from her modeling career.