By LRU Writer | On: August 04, 2019
Guitarist of the rock band Tokio Hotel, Tom Kaulitz has garnered enormous fame in the musical realm. The identical twin brother of Bill Kaulitz, Tom Kaulitz is not only garnering attention from his music only. He is making headlines in media for his dating relationship with the current judge of America's Got Talent, Heidi Klum. Tom Kaulitz, who has his share of past relationships, even went on an exotic vacation with his new girlfriend. 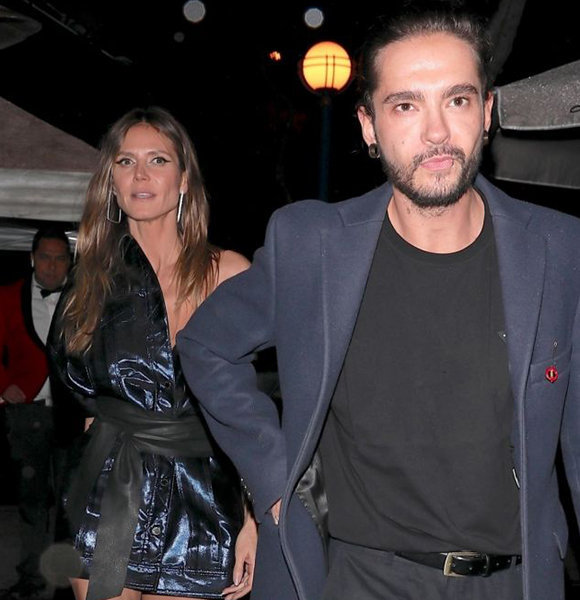 Guitarist of the rock band Tokio Hotel Tom Kaulitz has garnered enormous fame in the musical realm. But Tom, the identical twin brother of Bill Kaulitz, is not grabbing attention from his music alone.

He first grabbed headlines in media for his dating relationship with the judge of America's Got Talent, Heidi Klum. Tom, who has his share of past relationships, even tied the knot with the supermodel in secrecy.

Well, let's follow the story in detail down below!

Tom and his now-wife Heidi shared the "I do" in February of 2019. The married duo, however, opted to hide the joyous news from the fans and media for five months.

It was only after the musician, and the supermodel obtained their marriage certificate in California in July 2019 that the public became aware of their secret wedding.

Neither Tom nor his wife Heidi offered a comment when the news first broke. Before getting married, the couple was an engaged item for two months, having committed to each other in December 2018. Following the engagement, Heidi spoke about having a "medium-sized wedding."

Back in July 2018, Heidi opened up about the backlash she was facing for dating someone 17 years younger than her. She claimed to provide very little attention to those comments.

On 3rd August 2019, the Tokio Hotel musician and his fiancee-turned-wife Heidi Klum tied the knot for the second time. Married in a gorgeous yatch in Capri, Italy, the second wedding between the two was a star-studded affair.

Although the duo didn't invite cameras to their wedding, paparazzi still managed to snap pictures of them and their guests. In a bid to block the photographers' views, attendees used jackets and umbrellas.

On the big day, Tom wore a white blazer underneath a light blue shirt. Meanwhile, his bride looked every bit stunning in a strapless gown which featured several layers of tulle. Several days before the wedding, the German couple got spotted roaming the beautiful city of Capri, Italy.

German musician, Tom Kaulitz found a gorgeous girlfriend for himself. The well-known musician was dating German model and television personality Heidi Klum. He began hooking up with Heidi in mid-March 2018.

The couple made headlines after Tom was spotted leaving celeb hotspot Delilah together with Klum in West Hollywood on 14 March 2018.

Klum was spotted with Tom after seven months since she split from ex-boyfriend Vito Schnabel. Later, the duo was found locking lips at the set of America's Got Talent on 26 March 2018, which confirmed their dating status.

Similarly, the lovebirds were spotted again in Cabo San Lucas' airport on 8 April 2018. Both of them arrived together at the airport in Cabo San Lucas, Mexico after vacationing in Mexico over the weekend. They headed towards their car with their arms around each other. During their Mexico vacation, the 29-year-old Tokio Hotel superstar got spotted sharing a passionate kiss with topless Klum, which created quite a buzz in the media as well.

Before Heidi Klum, Tom was in a marital relationship to Ria Sommerfeld. They tied the knot back in 2011. The pair blossomed romance in 2009 and experienced one year of dating after they first met at a club in Hamburg, Germany. However, Tom parted his ways with his then-wife in 2016 due to irreconcilable differences.

As for Heidi Klum, she was previously in a marital relationship to singer Seal with whom she shares four children. She later filed a divorce from Seal and stayed in a dating affair with art curator Vito Schnabel, but the couple called it quit in September 2017.