By LRU Writer | On: February 10, 2020
American Reality star Tyler Baltierra is a reality star known for Teen Mom (2016-2017)...Tyler Baltierra has been married to Catelynn Lowell since...Tyler started dating Catelynn in 2005 after meeting at their seventh-grade...Tyler and Catelynn reconciled and became parents to... the couple tied the knot in a wedding... Teen Mom OG star Farrah Abraham tweeted Tyler Baltierra was gay... 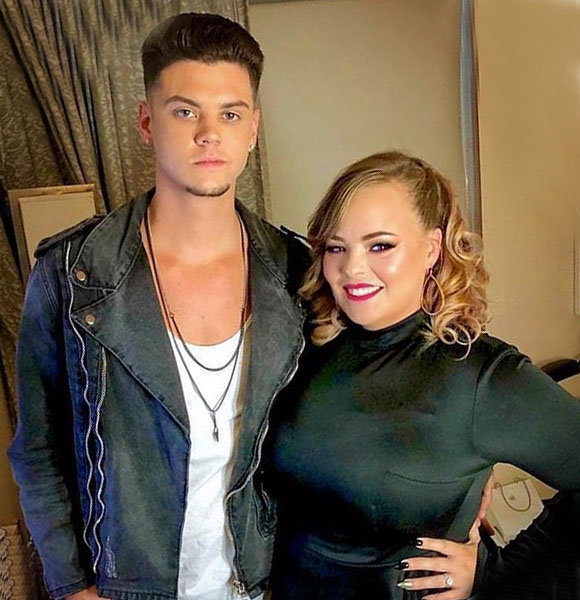 When Carolynn was born on 18th May 2009, Tyler and Catelynn were teenagers. Thus, they decided to put up Carolynn for adoption. A couple, Brandon and Teresa Davis, adopted her.

Tyler started dating Catelynn in 2005 after meeting at their seventh-grade music class. Catelynn became pregnant with Carolynn in 2008. The pair's struggle with teenage pregnancy and their eventual decision of adoption was televised in the MTV show, 16 & Pregnant.

More On Tyler's Relationship:- Tyler Baltierra Wants Wife Catelynn Lowell To Be Pregnant With A Baby! Will She?

Tyler and Catelynn then joined the cast of Teen Mom together. And, they got engaged on camera in 2010.

However, the duo broke up for a brief time due to Catelynn's alleged cheating. Tyler and Catelynn got back together but called off their wedding in 2013.

Tyler and Catelynn reconciled and became parents to Novalee Reign Baltierra in 2015. Following her birth, the couple tied the knot in a wedding ceremony in Michigan. The pair's first daughter, Carolynn, was also present for the big day.

In 2018, there were divorce rumors regarding Tyler and Catelynn's marriage. The stories started after Catelynn mentioned her husband divorcing her in the final episode of Teen Mom OG. But, the stories turned out to be false.

Tyler's wife miscarried their child in 2017. She was also dealing with mental health issues, including suicidal thoughts during the time. She got admitted to a treatment facility twice at the time.

In 2018, when Catelynn was pregnant with Vaeda, Tyler and his wife began to live apart. The pair made the trial separation arrangement to work through their issues.

On 18th December 2017, Teen Mom OG star Farrah Abraham tweeted Tyler Baltierra was gay. She alleged that he was hiding his sexuality.

In order for her to really insult me, I would first need to value her opinion and the lion does not dwell on the opinions of sheep

Tyler was responding to a query from a Twitter user regarding Farrah's accusations against him.

Tyler's parents are Butch Baltierra and Kimberly Forbes. They are divorced. The ex-couple also has a daughter named Amber Baltierra.

Tyler's father was married to Catelynn Lowell's mother from 2009 to 2013. They divorced due to domestic abuse problems.

Tyler was born on 12th January 1992, in Michigan. He is a published author; he released the book, Conquering Chaos, in 2015. Tyler co-wrote the book with his wife. The pair also launched Tierra Reign-kids' clothing life in 2017.