By LRU Writer | On: May 17, 2019
Tyra Banks is the first ever black model to feature as the cover girl in the coveted Sports Illustrated swimsuit issue...The former supermodel returned to the cover of the magazine 23 years after the groundbreaking feat in 2019...An entrepreneur who managed to build an empire outside the runaway, Tyra is a role model for the woman all around the world... 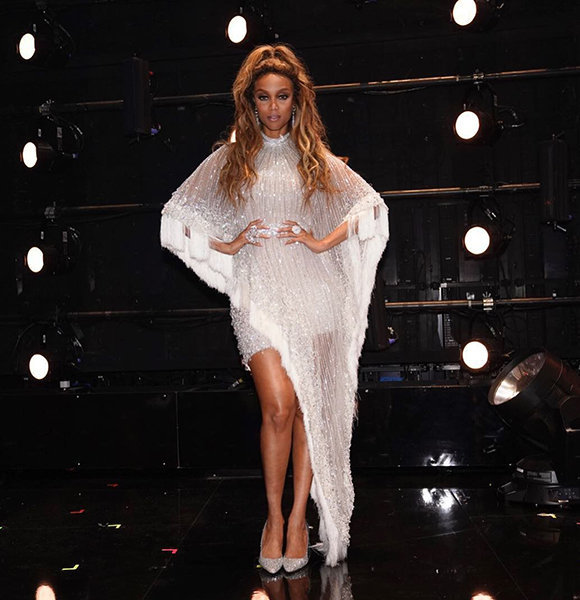 Tyra Banks is the first ever black model to feature as the cover girl in the coveted Sports Illustrated Swimsuit Issue.

The former supermodel returned to the cover of the magazine in 2019; 23 years after the groundbreaking feat. An entrepreneur, who managed to build an empire outside the runaway, Tyra is a role model for the woman all around the world.

Tyra enjoyed a colorful dating life. Her name got linked to various influential people in Hollywood. While all the linkup weren’t confirmed, Tyra’s affair with director John Singleton was the talk of tinsel town. However, the model-director affair couldn’t last long.

In the list of Tyra’s failed relationships, a prominent name remain at the top, i.e., basketball player Chris Webber. The duo dated from 2002 to 2004.

Fast forward to 2013; she fell in love with Erik Asla. Tyra and her photographer’s beau relationship was an ideal one. They were a partner in their personal life as well as professional experience. The love birds were together in the making of Tyra’s hit show America's Next Top Model.

Tyra’s life long desire of having children of her own met with a roadblock when she dealt with fertility issues. At the age of 40, she had taken part in the painful IVF process, but the failure became traumatizing for her. Thus, she opted for another option of becoming a mother via surrogacy.

27th January 2016 was a happy day in Tyra’s life as she welcomed her son Banks Asla with boyfriend, Erik Asla. The happy couple was over the moon for the new addition to their family.

While Erik boasts two children from his previous relationship, It was extra special for Tyra as she became a mother for the first time. In September 2016, she gushed about her baby with the US magazine. Tyra went on to reveal that her small boy was opposite of herself as a child. Unlike Tyra, her son enjoyed socializing and always wanted to sit on other people’s lap while she would only sit with her mother and cry at the sight of unknown people.

Fans couldn’t help but wonder if the new parents would get married and become husband and wife. But, far from getting married Tyra and Erik separated in 2017.

The reason behind the split was the change in the dynamics of the couple due to the new baby. However, tha pair agreed on co-parenting their son and put aside all the differences between them.

Tyra seemed to move past her five-year-long failed romance onto another love affair.

In October 2017, she got spotted with a mystery man at Cake Mix in West Hollywood. The pair enjoyed a good time over a laid out lunch. But America's Got Talent host refused from revealing the name of the alleged new boyfriend.