By LRU Writer | On: December 10, 2019
Glad tidings are on the way for Virginia Williams and her rapper husband Pusha T as they announced to the world that they are pregnant with their first baby...It took quite a long time for the duo to call each other husband and wife as they dated for...he lovebirds got married at The Cavalier Hotel in...For the wedding, the bride wore... 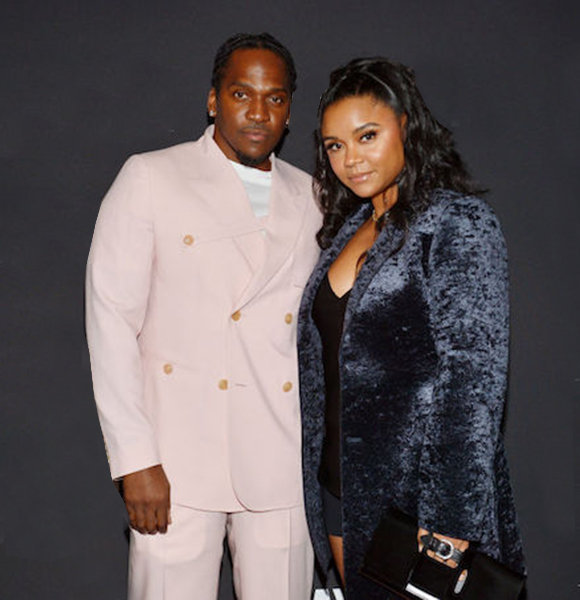 Glad tidings are on the way for Virginia Williams and her rapper husband Pusha T; they announced Virginia's pregnancy via their respective Instagram handles on 9 December 2019.

The duo posted an illustration that was Christmas themed showed the couple and their dogs with words that said,

In the same post, Virginia posted a sonogram of her baby, which looked like it was waving for the picture. The mom-to-be explained in the caption that the baby would arrive in the Gemini season, but did not disclose the gender. Guess everyone must wait for the soon-to-be parents to reveal more details about their baby.

Virginia and Pusha dated for more than a decade before finally getting engaged on 21 July 2016. Finally, two years later, on 21 July, the lovebirds got married at the historic Cavalier Hotel in Virginia. The wedding was exquisite with the guest list of around 150 people, including Grimes, Kim Kardashian, and Kanye West, as well as the best man Pharrell Williams.

Read About Pharrell And His Wife:- Helen Lasichanh Wiki: Wife To Pharrell Williams And Parent To Four!

On the big day, the bride wore two dresses; one for the ceremony and another for the reception. She wore a floral embroidered Marchesa gown, which showcased a deep v-neckline when she said “I do” and wore a minimalistic strapless gown made by Reem Acra for the dance and reception.

While on the other hand, the groom wore a custom Dior suit designed by famous designer Kim Jones.

Interestingly, the pair chose Virginia Beach for their wedding venue as they wanted their friends to explore their hometown beauty.

Pusha T, whose real name is Terrence LeVarr Thornton, gained fame through his record label, Re-Up Records, and hit mixtapes such as Fear of God, Fear of God II: Let Us Pray and his album, Daytona (2018). As such, his net worth is $15 million.

Talking about Virginia's net worth, the number is completely veiled as she does not share the intricate details of her life to the public, unlike her husband. Hence, very little is known about Virginia and her life outside Pusha T's spotlight.