By LRU Writer | On: October 03, 2019
Xolo Mariduena and girlfriend as seen during a photo shoot on...as he is dating a young actress named...his ethnicity resonates from his first name as it... 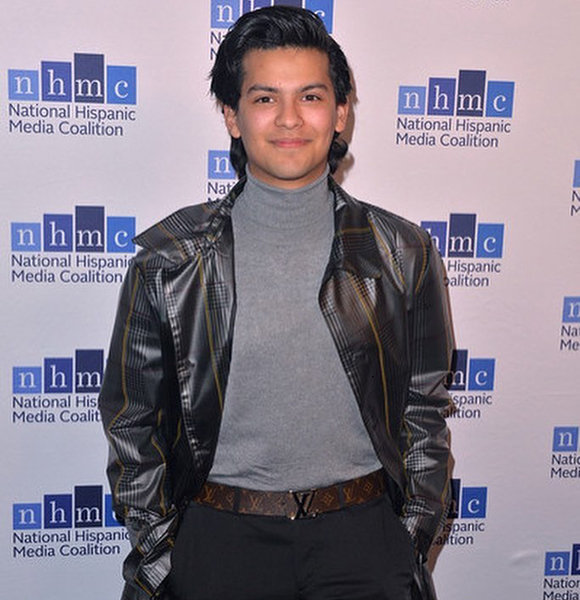 Relationships in the industry are often full of complications and controversies. Xolo Marideuna, on the other hand, is not worried about the matter as he has found his perfect match.

Despite his girlfriend coming from the same industry as the actor, the pair share a healthy romance and are deep into each other. The level of passion which the partners have for one another is sure to make anyone jealous.

Xolo is lucky enough to find his muse at a young age as he is dating a young actress named Hannah Kepple. Hannah is none other than his co-star from the TV show Cobra Kai.

Interestingly, the two started to take a liking for one another while working on the first season of the show. Moreover, in a short period, the artist grew closer to her, and the duo soon took their friendship to a new level. In his girlfriend's own words, she revealed,

"We were actually friends, a little flirty and then we started talking after season 1, and it clicked."

Since then, love took hold in the couple's life, and their bond grew the firm with each passing year. Xolo is vocal about his relationship with the beautiful actress and their attraction for one another is evident through their respective Insta handles. Xolo Mariduena and girlfriend Hannah Kepple as seen during a photoshoot on 8th May 2019 (Photo: Xolo Mariduena's Instagram)

Due to the couple's relatively public relationship, fans are often lucky to get glimpses of their romantic moments together.

While Xolo and Hannah have a great thing going on, the Cobra Kai actress may not be his first girlfriend.

The Parenthood star was previously linked to model Jayka Noelle. However, neither of them ever confirmed to dating.

Xolo (real name: Ramario Xolo Maridueña) celebrates his birthday on the 9th of June, while his birth year is 2001. Interestingly, the actor comes from a diverse, multicultural background as his family possesses Mexican, Cuban, and Ecuadorian heritage.

Moreover, his ethnicity resonates from his first name as it means Dog Star in the indigenous Nahuatl language.

Likewise, his mother works as a Radio Jockey in a major radio station. The 18-year-old artist also has a younger sister named Oshun Maridueña.

Although the TV show Cobra Kai heavily contributed to his success, Xolo had appeared in several TV shows in the past. He made his onscreen debut in 2012 with the show titled Parenthood. He was a recurring cast in the show which lasted for three years.

Afterward, Xolo landed some minor roles in several TV shows such as Furst Born and Rush Hour. Likewise, his significant role in Cobra Kai brought him to the spotlight.

But, the young actor hasn't yet appeared in any significant big-budget movie. Xolo still has a long way to go in his acting career, with fans hoping to see him on the big screen soon.